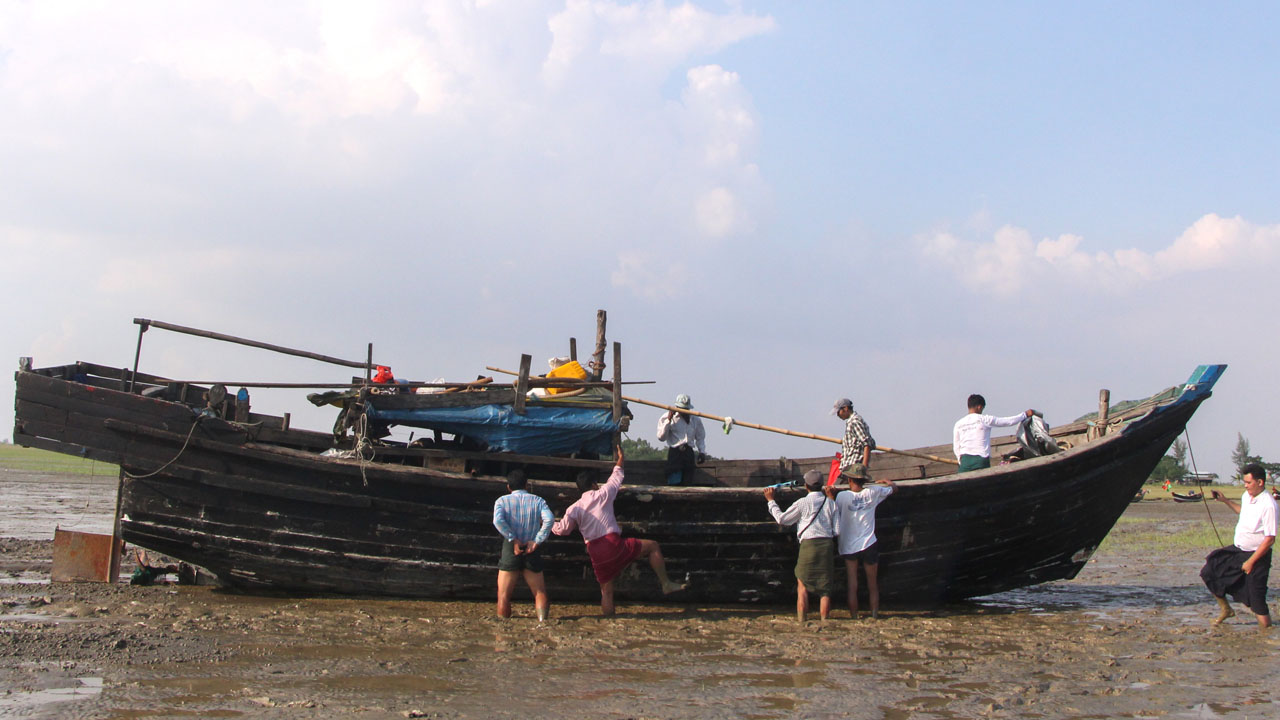 Myanmar local officials check the abandoned boat of Rohingya Muslims washed ashore in Kyauktan township south of Yangon on November 16, 2018. – A boatload of more than 100 Rohingya Muslims who fled a camp in Myanmar were found off the country’s south coast on November 16 after spending 15 days at sea in a failed attempt to reach Malaysia. (Photo by Myo Kyaw SOE / AFP)

A boatload of more than 100 Rohingya Muslims who fled a camp in Myanmar were found off the country’s south coast Friday after spending 15 days at sea in a failed attempt to reach Malaysia.

The group of 106 people were discovered floating in a wooden boat on the Andaman Sea just off the shore of Kyauktan township an hour south of Myanmar’s commercial capital of Yangon, police told AFP.

The Rohingya said their group included 23 children and that a girl had died “about nine days ago”.

“One girl died at sea… she had not eaten and she drank seawater,” said Eilia, 35, who added the boat had run out of petrol.

Others in the mostly male group said they were from various Rohingya camps in Sittwe, Rakhine state’s capital.

“We left 15 days ago and are going to Malaysia,” said a young Rohingya man, who was immediately barred from speaking to reporters by police.

The group was escorted by local Red Cross members and immigration officers to Kyauktan township in eight vans, with four armed police officers in each vehicle. Once in Kyauktan, they were given shelter in a community hall.

Brutal crackdown
The stateless minority face widespread persecution in Myanmar, and more than 120,000 are forced to live in camps in Rakhine state after inter-communal violence erupted between them and ethnic Rakhine in 2012.

Housed under grim conditions, the Rohingya — who have been denied citizenship in Myanmar — have no freedom of movement and a lack of access to education and healthcare.

Eilia said they had left their camps because of the lack of food.

“The food rations they give us are not enough,” he said. “We were told we would get jobs and be able to eat if we went (to Malaysia).”

A camp leader from Sittwe confirmed that the group had departed two weeks earlier.

“They left 15 days ago trying to get to Malaysia,” Kyaw Tin told AFP. “They left secretly… We only found out when they had a problem, about three days ago.”

More than 720,000 Rohingya have fled Rakhine state for Bangladesh after a brutal crackdown by the Myanmar military in August 2017.

Those who fled to overcrowded refugee camps in Bangladesh brought with them accounts of rape, extrajudicial murders and arson perpetrated by the military.

The two governments signed a repatriation pact last year, which was due to begin on Thursday. Myanmar said they were ready to receive more than 2,200 Rohingya back to resettlement camps.

But none have taken up the offer, with many citing fears without guarantees of safety and citizenship.

“With the prospect of boat movements increasing following the end of the monsoon season, it is increasingly urgent for the authorities to take measures to address the root causes of displacement,” McDonnell said.

UN investigators have urged the International Criminal Court to open a case against Myanmar’s military for “genocide” against the Rohingya — a damning charge the army and government denies, insisting that the security clearances were justified to tamp down Rohingya terrorists.