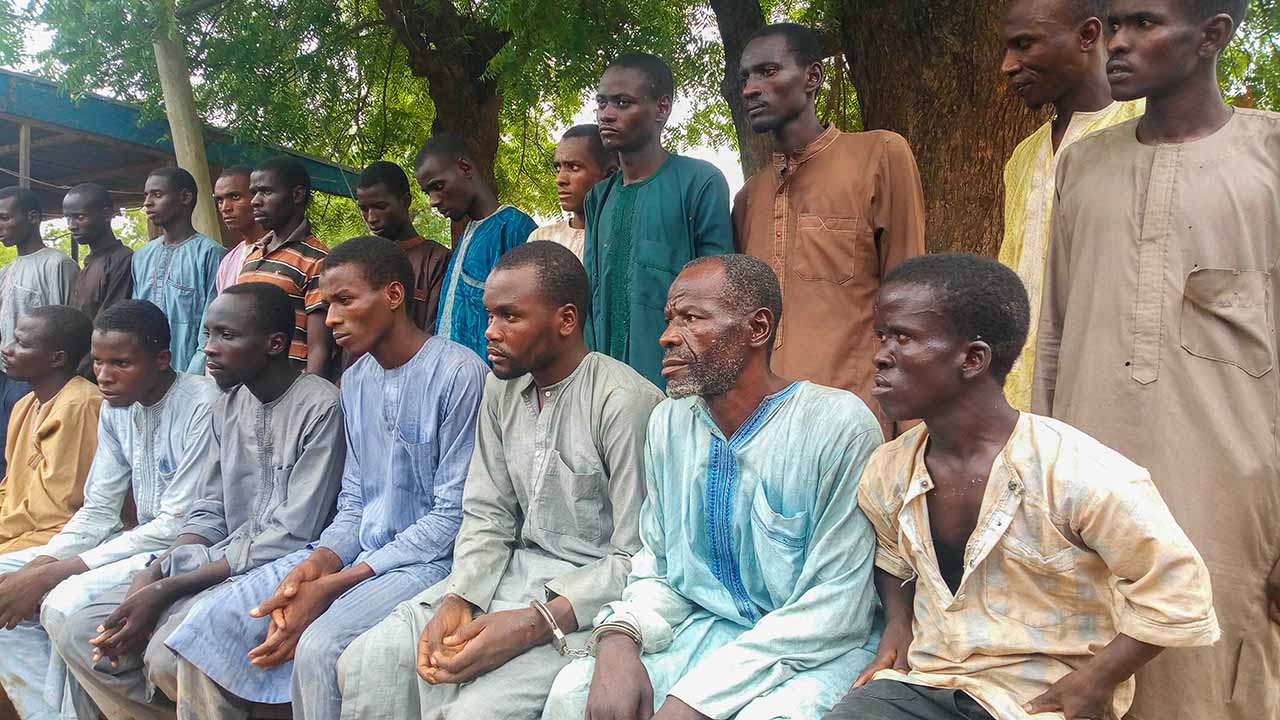 Police officers outline suspected Boko Haram militants in Maiduguri, northest Nigeria, on July 18, 2018.<br />Eight men have been arrested in connection with Boko Haram’s abduction of more than 200 schoolgirls from the remote town of Chibok in northeast Nigeria, police said on July 18, 2018. The 14 others were alleged to have been involved in logistics and planning suicide bomb attacks. / AFP PHOTO / AUDU MARTE

Eighteen people have been killed in an attack by suspected Boko Haram jihadists in the Lake Chad region, a Chadian military source said Sunday.

“Boko Haram elements attacked a village south of Daboua,” not far from Chad’s border with Niger, at around 9:00 pm (2000 GMT) on Thursday, the military source said.

The assailants “cut the throats of 18 people, wounded two others and kidnapped 10 women”.

Boko Haram’s Islamist insurgency has devastated the region since it took up arms in 2009 in Nigeria, leaving at least 20,000 people dead, displacing more than two million others and triggering a humanitarian crisis.

Chad, Cameroon and Niger have all joined the military effort by Nigeria to crush Boko Haram. Chad has seen a recent increase in attacks by the group.

In May, six people were killed, including four government officials and a soldier, in a Boko Haram attack on a Chadian army checkpoint on an island in Lake Chad.

Niger’s army said Saturday it killed “10 terrorists” after one of its military positions in the southwest of the country was attacked by Boko Haram.

Army spokesman Colonel Onyema Nwachukwu said the jihadists had been intending to attack and loot the market in the town of Babangida when they ambushed troops.

“Sadly, while fighting through the ambush, the troops recorded some casualties,” he added, without specifying numbers.

Babangida is near the Geidam area where on July 14 fighters thought to belong to the Boko Haram faction led by Abu Mus’ab al-Barnawi overran a military base housing hundreds of troops.

Al-Barnawi is backed by the Islamic State group.

Scores of troops were feared dead in the attack in the village of Jilli but the military has said no soldier lost his life.

Twenty-four hours earlier, Nigerian troops were ambushed in the Bama area of Borno state. Both attacks have raised questions about claims that the Islamist militants are virtually defeated.

Taken with the attacks in Chad and Niger, there will be fears about a renewed campaign in the Lake Chad region and the strength of the IS-backed Boko Haram faction.

It has distanced itself from long-time leader Abubakar Shekau, whose supporters have been behind indiscriminate violence towards civilians, particularly using suicide bombers.