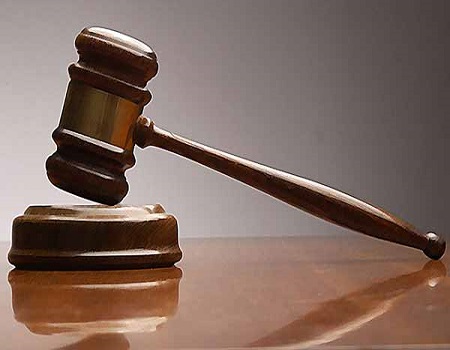 TWO men, Ikechukwu Ozurumba and Chima Chukwuemeka, were on Thursday docked before an Igbosere Magistrates’ Court in Lagos over the alleged murder of a taxify driver.

Ozurumba, 28 and Chukwuemeka, 34, were also charged with the theft of the taxi driver’s car valued at N1.5 million.

They are facing a five-count charge bordering on murder, theft and accessory after the fact, preferred against them by the Federal Special Anti-Robbery Squad.

He said that the first defendant, Ozurumba, conspired with one Kelechi (a.k.a Sunshine) still at large, and killed one Olufemi Ebenezer, taxify driver, by hitting him with some tools which resulted to his death.

Fadipe said after killing the victim, the defendant dumped his body at Jimoh Street, Okokomaiko, Lagos.

According to the prosecutor, the defendant also made away with the victims Toyota Camry car marked SMK-980 FM, valued at N1.5 million.

He said that the second defendant, Chukwuemeka, “with the knowledge that the first defendant committed an offence, gave him shelter to prevent his arrest by the police.”

The plea of the first defendant, Ozurumba, was not taken but the second defendant, Chukwuemeka, pleaded not guilty to the charge of accessory after the fact.

The prosecutor, however, urged the court to remand both defendants.

He opposed the bail application made in respect of the second defendant, adding that he was charged under robbery and firearms law which was under the jurisdiction of the high court.

She granted the second defendant bail in the sum of N250, 000 in like sum and adjourned the case until May 28, for mention.

The post 2 men in court over alleged murder of taxify driver appeared first on Tribune Online.