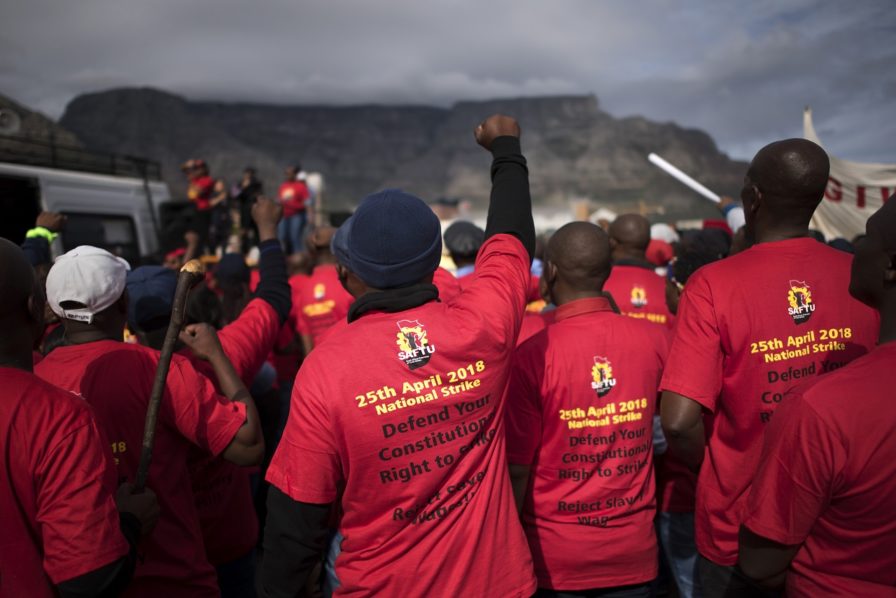 Members and supporters of the South African Federation of Trade Unions (SAFTU) take part in a march through the city centre of Cape Town on April 25, 2018 to protest against the government’s proposed minimum wage during of a country-wide national strike. / AFP PHOTO / RODGER BOSCH

No fewer than 2,000 South African union members marched in Johannesburg in a nationwide protest on Wednesday against a proposed national minimum wage, presenting a test for new President Cyril Ramaphosa who champions the policy.

The 20 rand (1.6 dollars) an hour minimum wage, which Ramaphosa sees as an important step to tackle labor instability and wage inequality, was approved by the cabinet in November and meant to be introduced on May 1.

Dissatisfaction over the minimum wage bill could delay implementation.

The new president, who replaced Jacob Zuma as president in February, has staked his reputation on revising a stuttering economy and rooting out corruption associated with Zuma’s nine scandal-plagued years in power.

The protests are the second major public show of discontent in South Africa within a week. Ramaphosa on Friday cut short a visit to a Commonwealth summit in Britain a day earlier to travel to the North West province where crowds have been protesting against poor public services.

The workers were marching several kilometers to the labor ministry offices in the commercial hub Johannesburg holding aloft placards, one of which read: ‘To hell with R20 per hour’.

“A minimum wage of 20 rand an hour is a spit in the face of the working class. Ramaphosa has sold out workers,” said Moses Modisane, a shop steward for the metal workers union NUMSA who works at an Anglo American mine near the city.
Supporters of the minimum wage say it will reduce inequality and stimulate economic growth as workers can spend more.

Critics say it could lead to increased unemployment, already at record highs, with some employers unable to afford higher wage bills.

The South African Federation of Trade Unions (SAFTU), which says it represents 30 unions with around 800,000 members, making it the second-largest trade union federation after COSATU, said its workers countrywide would take part in the protest.

“We want to send the strongest message to those who are selling us out,” SAFTU Secretary-General Zwelinzima Vavi told a crowd of workers.

“This is not a picnic … This is the day we have chosen to fight back. We are not giving up our lives for 20 rand an hour,” said Phakamile Hlubi-Majola, spokeswoman for NUMSA which represents metal workers in the automotive and engineering sectors.

The government’s spokeswoman Phumla Williams in a statement called for the workers to stage peaceful protest.

SAFTU, which was founded last year, says it was excluded from talks over the minimum wage and there was no meaningful consultation with workers.

The government says it held months of negotiations with unions and employers before the minimum wage was introduced.
COSATU, which is the country’s biggest union and forms part of the ruling alliance with the ANC, denounced the protest.