Super Eagles manager, Gernot Rohr has said that his team remain “a work in progress” and warned they “won’t get carried away with friendly success” after they beat Poland 1-0. 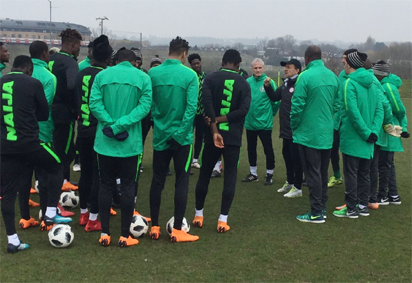 Victor Moses’ second-half penalty saw off Poland on Friday but Nigeria were below par in front of a vociferous crowd in Wroclaw.

“We’ve seen a lot of good things and some things we must work on before the World Cup in Russia,” Rohr said.

“Friendly matches provide a great opportunity to see everything about your team.

“It is not really the same as a World Cup game. Our preparation is still a work in progress to be ready.

“We know winning friendly matches could give us false hope but we want to keep working hard,” he added.

They will face Serbia in another friendly in Barnet, London tomorrow’s night.

Rohr has guided his team to an unexpected qualification – their sixth World Cup appearance – after taking over from Sunday Oliseh in August 2016.

The win over Poland will be a huge boost to Nigerian confidence following this victory over a team ranked sixth in the world, 46 places above the Super Eagles.

It was the second notable friendly scalp for the Super Eagles after a 4-2 triumph over 2014 World Cup runners-up Argentina last November.

Nigeria face the two-time World Champions again in the group stage in Russia.

The West Africans open their Group D campaign against Croatia on 16 June.

They will then face Iceland on 22 June before finishing with Argentina four days later.

The three-times African champions will be making a sixth appearance at the World Cup tournament in Russia.