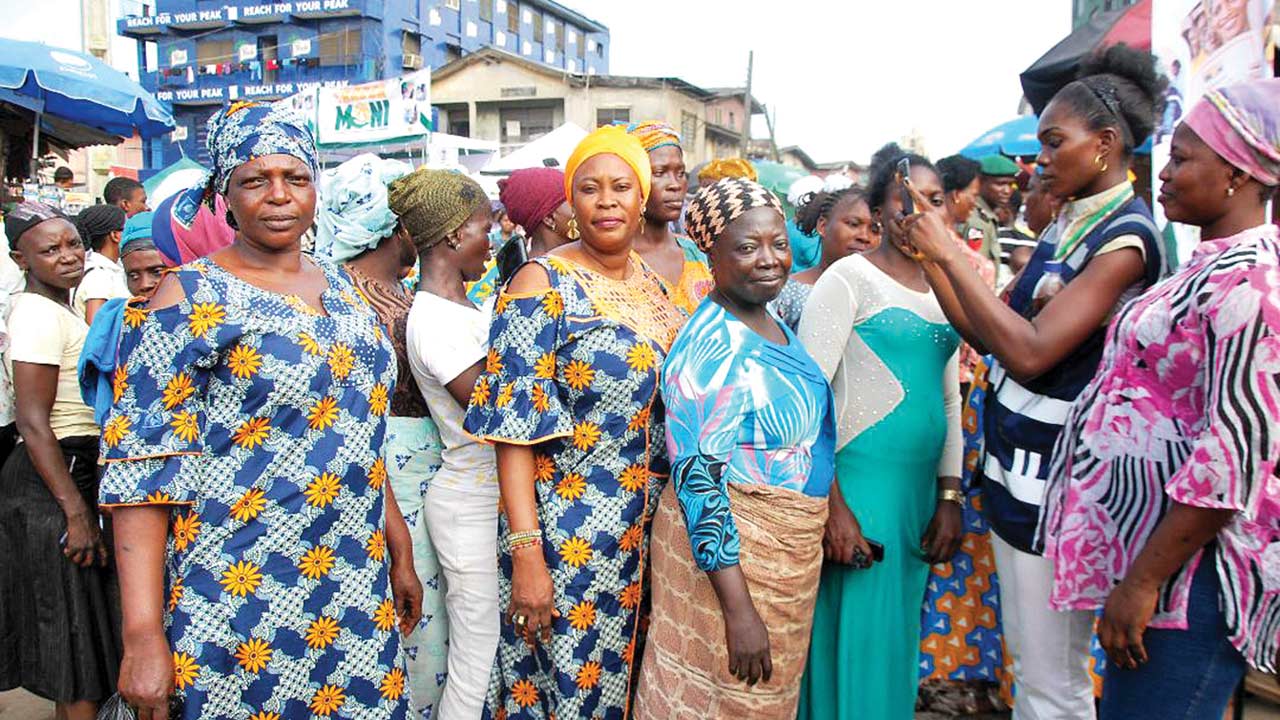 Cross-section of traders waiting to be captured at the flag-off of TraderMoni empowerment programme at Ojuwoye market, Mushin, Lagos. Recently… PHOTO: AYODELE ADENIRAN

With allegations that the timing of the Federal Government’s TraderMoni, an aspect of Social Investment Programmes (SIPs) was deliberately planned to coincide with electioneering, thus enabling the All Progressives Congress (APC) to reap undue advantage unrelenting, government has stepped up efforts to deny the insinuations.
Opponents readily point at the “TraderMoni,” which is officially called Government Enterprise and Empowerment Programme (GEEP), as one of such conduits, were political gains are expected to come from.

On Wednesday November 7, minority leader of the Senate, Biodun Olujimi, alleged that the Federal Government is using the funds of the SIP to secure permanent voter cards ahead of the 2019 elections. The Peoples Democratic Party (PDP) lawmaker said: ‘I Stand With Buhari’ is written on the forms given to recipients of the SIP funds… Right now the funds are being used for political reasons and they are being dispensed and given freely to people who can bring up their PVCs and signed several copies. The issuants are now in charge,” she said.

A day after, the Southern and Middle Belt Leaders Forum, in a communiqué released after meeting in Abuja, re-echoed the allegation by accusing Osinbajo of buying votes ahead of the 2019 general election.

In the document, which was jointly signed by Yinka Odumakin for the South West, Bassey Ewa-Henshaw for South South, Isuwa Dogo for the Middle Belt and Chigozie Ogbu for the South East, the Vice President was further accused of “bribing voters” with the TraderMoni scheme otherwise designed to help petty traders expand their trade through the provision of collateral free loans of N10, 000. The loans are repayable within a period of six months.

The forum demanded an end to the scheme, saying it is against the anti-corruption campaign of the administration, just as it expressed utter disappointment in “Osinbajo for his continued corruption of the electorate in a funny scheme named TraderMoni.”

Further condemnation, yesterday, came from the African Democratic Congress (ADC) presidential candidate for the 2019 election, Dr. Obadiah Mailafia, and Lead Director of Centre for Social Justice (CENSOJ), Mr. Eze Onyekpere, both of whom condemned in very strong terms, the alleged requirement of PVC numbers from traders as condition for qualification for the disbursement of the N10, 000. They were united in their description of the act as criminal, wicked, scandalous and a vote-buying strategy aimed fostering election rigging.

Speaking to The Guardian separately, the duo called on Nigerians to resist the ruling party’s antics to foist itself on Nigerians against their wishes, by refusing to submit their PVC information.

“What these guys are trying to do is very dangerous and a criminal act. They want to foist themselves on Nigerians after their despicable and genocidal acts against the people. They are totally bereft of ideas. I speak on behalf of the motherless; widows and widowers across the Middle Belt, in Kaduna, in Zamfara and in other parts of Nigeria, where these guys have carried out their desperate and wicked acts of wits. God has rejected them and as a result we the people have also rejected them. Why is it that they are requesting for PVC information if not for rigging? People must resist them and not supply the needed information to them. Don’t supply them your PVC information. If they insist, give them fake numbers,” the former Deputy Governor of the Central Bank of Nigeria (CBN) said.

Onyekwerre, a social justice advocate said: “The requirement for PVC information from applicants for TraderMoni is purely an advanced vote-buying strategy, and to say the least, this is scandalous. If it’s not about vote-buying, why is it that when we go with cash to the bank we are not required to provide our PVCs? This programme is targeted at collating PVCs of vulnerable Nigerians that are in their millions for buying for the 2019 polls, and government is embarking on this poverty alleviation strategy when the economy is in shambles, and it has no better, sustained method of fighting poverty.

“To start with, what much can N10, 000 do when it comes to alleviating extreme poverty, more so when it is shared in an opaque manner?”

He called for the immediate cancellation of that requirement and also advised prospective applicants to withhold their PVC details from people he described as having other motives other than empowerment.

But the Special Adviser to the President on SIP, Maryam Uwais told The Guardian that the alleged political gains accruing to the ruling party is totally untrue, and the allegation, uncalled for.

According to her, starting from the cash transfer programme to TraderMoni, no political capital is made by the APC. In the cash transfer, for instance, “we identify the poorest and the most vulnerable Nigerians. Why would we give them forms, do they read? If you see the people that we actually engage, we train staff at state and local governments levels to interface with and teach them, and get to know what is poverty in their own context. So, why would we give them forms to fill?

“The same thing happen with TraderMoni. We go into the markets with our enumerators and they just talk to them, and they don’t even need an account to borrow N10, 000. So, why would we add to ourselves, the burden of filling forms and all of that? The applicants just agree to the programme and we put it on our forms. All you need to be a part of this is a basic phone.

“And of course, I hope everybody knows by now that N-Power beneficiaries are selected online? So, we’ve created that level playing field. And in the school feeding programme, the women are selected from the communities, where the primary schools are cited. So, the women must live there, and majority of them are not literate. They are just women we are trying to empower so that they can begin to cook to make money for themselves.

“I don’t understand this talk about PVC? Even if the forms have inscriptions like, ‘write your PVC,’ is there a guarantee that if you write it the beneficiaries will now vote for APC? We’re not asking for APC identity card or something like that,” the presidential aide said.

The Office of the Vice President has described as both unbelievable and unfortunate, the call by the Southern and Middle Belt Leaders Forum for the suspension of the TraderMoni.

A statement by the Senior Special Assistant to the President on Media & Publicity, Mr. Laolu Akande, noted that such an attack on the SIP is a direct confrontation with the millions of Nigerians benefitting from all the SIPs, especially the projected two million who will be receiving the collateral-free loans by the end of the year.

“It is deceitful for anyone or group to accuse the Vice President, Yemi Osinbajo, SAN, of advance vote-buying through TraderMoni, a micro-credit scheme designed to assist the bottom of the pyramid petty traders nationwide…”

According to Akande, “We do not think the Nigerian people are up for sale, nor can they be bought. Such suggestions are an insult on our collective identity. And calling for the suspension of a scheme that improves the businesses of ordinary, hardworking Nigerians, like petty traders, is not only unfair, but an attack on the common man.

“The Social Investment programme of the Buhari administration started in 2016, and the TraderMoni scheme is a part. So, it is false to even insinuate that the scheme was meant for advance vote-buying when it was conceived two years ago.”

Meanwhile, Senate’s investigation into alleged diversion and abuse of the SIP may begin in earnest this week.

Accordingly, memoranda are being sent out to appropriate officials and institutions of government, which the committee had shortlisted for interrogationLast Wednesday, the Senate passed a resolution setting up a Seven-member adhoc committee led by Senator Ibrahim Gobir (APC, Sokoto State) to investigate the alleged diversion of funds.