UYO — The accounts of the Akwa Ibom State Government have been frozen by the Economic & Financial Crimes Commission, EFCC, it was learnt yesterday, but spokesman of the anti-graft agency, Wilson Uwujaren denied this in a telephone conversation. The development came on a day leading stalwarts of the ruling All Progressives Congress, APC descended on the state to welcome immediate past governor of the state and former Senate Minority Leader, Senator Godswill Obot Akpabio into the party’s fold. 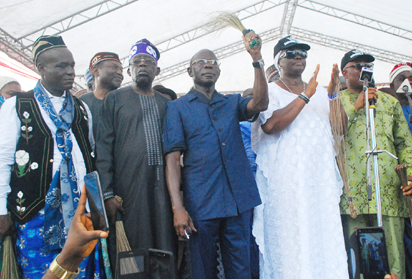 Akpabio’s formal defection from the Peoples Democratic Party, PDP which was welcomed before a mammoth crowd in his Ikot-Ekpene home town was accompanied by the defection of two members of the state House of Assembly and two former commissioners in the Governor Udom Emmanuel administration. The two commissioners who defected were sacked Tuesday night by the governor.

However, the failure of the mass defection of state legislators that had been envisaged to accompany Akpabio’s came as PDP stalwarts in the former governor’s Ikot Ekpene senatorial district held series of rallies across the district to bolster support for Governor Emmanuel.

The freezing of the state’s accounts was confirmed by multiple sources working in the state administration. They, however, refused to be quoted because of the sensitivity of the matter.

“We don’t know why the EFCC has taken this step. We were never informed of any infraction, and even no court order was obtained,” one source who spoke on condition of anonymity said yesterday.

President Muhammadu Buhari who was represented by the Secretary to the Federal Government, Mr. Boss Mustapha praised what he described as the sterling qualities and achievements of Senator Akpabio. He said with Akpabio, the South-South geo-political zone was bound to gravitate towards the APC.

National Chairman of the party, Adams Oshiomhole, while repeatedly taunting the PDP described Akpabio as an ‘uncommon defector.’

He also took a swipe at Senate President, Dr. Bukola Saraki, saying that he, Saraki lacked the quality to lead the Red Chamber and urged Akpabio to bring his wealth of experience to bear in the running of the party in the state as leader of the party.

Senate Majority Leader, Senator Ahmed Lawan, lauding the defection and speaking against the background of the recent defection of 14 senators from the APC to the PDP and other parties said Akpabio’s move had swallowed up the recent losses of the APC.

Also speaking at the rally, Tinubu blasted the PDP as a failure. His words:

“For 15 years, we gave the other party room to change Nigeria but they failed, they believe in sharing and looting.

“Those people believe in sharing, but we believe in investing in the people. We give priority to infrastructural development, economic development,” Tinubu said as he charged the audience to be patient with the administration.

Speaking at the rally, Akpabio said he did not leave the PDP for the APC to claim protection from prosecution in the hands of the EFCC as he affirmed that there was no record of financial misdeed on his part.

“I have never been charged to court. The EFCC did not find anything on me,” Akpabio said.

As the former governor was welcomed to the APC, loyalists of the incumbent governor held rallies across the Ikot-Ekpene Senatorial district to show solidarity with him and the PDP.

Senator Emmanuel Ibok Essien, former deputy chief whip of the Senate said Akpabio was on his own in defecting to the APC as he did not have the support of his people.

Ibok-Essien who managed Akpabio’s Senate campaign election in 2015 expressed dismay that the former Senate minority leader decided to defect without the courtesy of informing him and other political leaders of the senatorial district, maintaining that the people have withdrawn the endorsement and support earlier given to Akpabio.

“Udom Emmanuel will be returned in 2019, not only Udom Emmanuel but all the PDP candidates in Akwa Ibom. I can never leave the PDP. I am appealing to all of you to remain in PDP. Since we heard that Akpabio was going to defect, it has been a shameful thing to us.

“ But I am happy today because our people have been liberated from slavery. Out of the 54 appointments given to Ikot Ekpene Senatorial district, in this administration, Ikot Ekpene Local Government Area got only five while Essien Udim where Akpabio comes from got 34 appointments.”

Several others spoke at the occasion, including serving commissioners and party chieftains, all of who denounced Akpabio.

Earlier, Secretary to the State Government, Dr. Emmanuel Ekuwem had announced the dismissal of the two commissioners who subsequently defected at the rally where Akpabio was welcomed into the APC.

Meanwhile, the national chairman of the PDP, Prince Uche Secondus has condemned the defection, saying that Akpabio needs to be pitied.

“He deserves our pity because whatever would make somebody to choose bad instead of good is clearly one that should be prayed for, for salvation, especially given the fact that wolves are waiting for his arrival to devour him.

“How on earth can anybody who has his eyes wide open be seen walking into danger knowingly?,” he asked in a statement issued yesterday.

Also reacting, the chairman of the Board of Trustees, BoT of the PDP, Senator Walid Jibril said the party had donated Akpabio to the APC.

“The purported resignation of our minority Leader, Godswill Akpabio is also an   act of Democracy.

“Therefore, considering the recent action taken by Acting President Osinbajo, the PDP is happy to donate Senator Godwill Akpabio to APC through him with great pleasure, as we have many PDP Senators to do that job which has been upgraded to majority leader.

“On behalf of the BoT we wish Akpabio bye-bye and safe journey, advising him to learn from history especially from those that left us and are now returning in droves” he said.