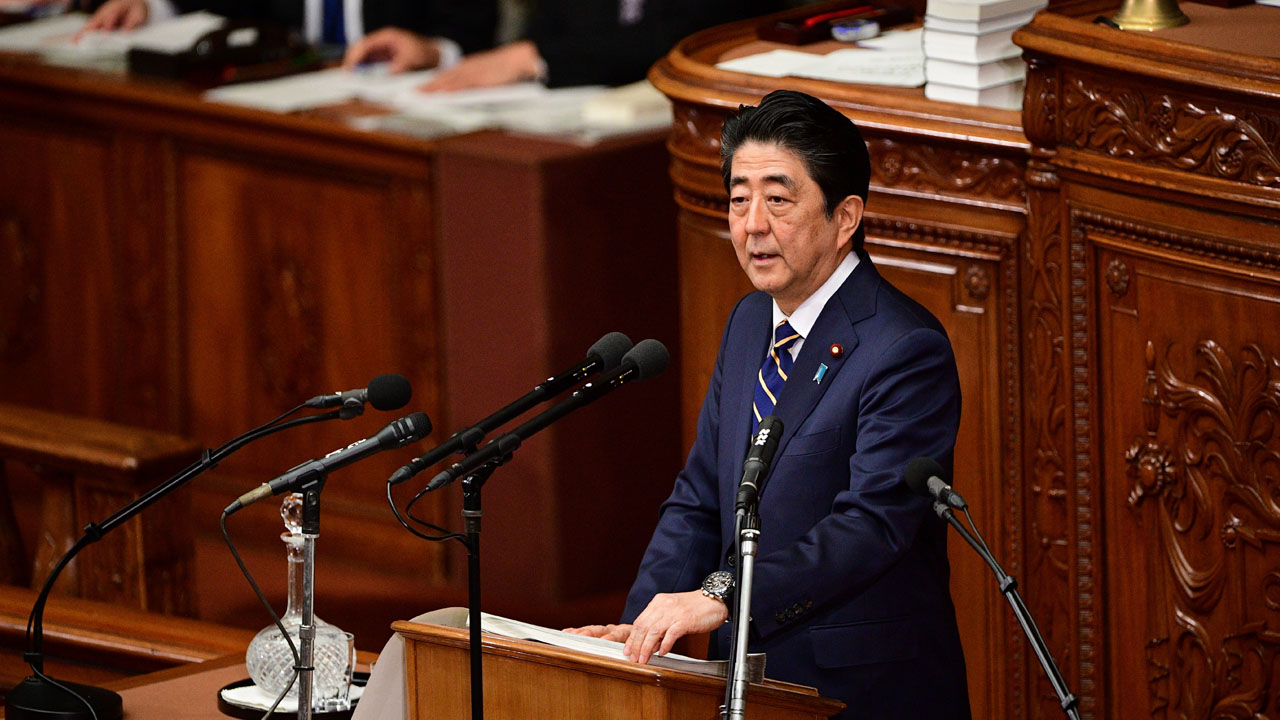 Japan’s Prime Minister Shinzo Abe delivers a policy speech at the start of the extraordinary Diet session in Tokyo on January 28, 2019. (Photo by Martin BUREAU / AFP)

In a major policy speech to mark the opening of parliament, Shinzo Abe also vowed to push Sino-Japan ties “to a new stage” and pledged a record budget to improve crumbling infrastructure in the world’s third-biggest economy.

“I will act resolutely, never failing to seize every opportunity to break the shell of mutual distrust, and I myself will directly face Chairman Kim Jong Un… to resolve North Korea’s nuclear and missile issues, as well as the abductions issue,” Abe said.

Abe gave no timeframe for a potential meeting with the North Korean leader but the comments came as Kim has ordered preparation for a second summit with US President Donald Trump, likely towards the end of next month.

“I will aim at diplomatic normalisation by settling the unfortunate past,” Abe said, using a Japanese diplomatic euphemism referring to harm caused by Japan during its brutal colonisation of the Korean peninsula before and during World War II.

The conciliatory message contrasted sharply from a year ago, when Abe used the same parliamentary address to set out a hardline approach, pledging to “compel North Korea to change its policies” and describing Pyongyang’s nuclear and missile programmes as an “unprecedentedly grave and urgent threat”.

Pyongyang released what it said were the five survivors in 2002, and said eight others it admitted kidnapping had all died.

North Korean authorities have given no public indication of any willingness to meet Abe, while Pyongyang’s state media regularly excoriate Japan over its past history and Abe for ramping up defence spending.

A commentary by the official KCNA news agency earlier this month called Japan a “heinous criminal state against humanity” and an “immoral and impudent country”.

‘Peace and prosperity’
On China, Abe said ties had “completely returned to a normal path” after he visited President Xi Jinping in Beijing last year. Xi is expected to make his first official visit to Japan in 2019.

“I will strongly pursue diplomacy with neighbours for a new era… in order to make northeast Asia truly a land of stable peace and prosperity,” he said.

Bilateral ties were harmed in 2012 when Tokyo “nationalised” disputed islands in the East China Sea also claimed by Beijing. Until recently, neither nation had made much effort to repair relations.

But Japan’s business community has long urged Abe to improve ties with China, Tokyo’s largest trade partner as well as the biggest source of foreign tourists, who are collectively becoming a key driver of the country’s chronically fragile economy.

Tokyo believes a successful Xi visit is key to a productive G20, which Japan hosts this year, and hopes the Chinese leader will attend the 2020 Olympic Games.

Abe was cautious about Russia, amid a territorial row over tiny islands to Japan’s north that has proved difficult to resolve despite frequent meetings with President Vladimir Putin.

Domestically, Abe vowed to press ahead with an upcoming consumption tax hike from the current eight percent to 10 percent from October.

He also pledged a whopping seven trillion yen ($64 billion) on infrastructure spending, as the nation’s many roads and bridges become dilapidated and Japan routinely faces serious natural disasters such as flooding and earthquakes.