Parents of the co-joined twins separated at the University of Abuja Teaching Hospital, Ferdinand and Courage Buzugbe, on Wednesday, said they once considered abandoning their children after they were born because of the family’s economic situation.

The couple, who are currently jobless and without a roof over their heads, stated this in separate interviews with Vanguard in Abuja.

Delta-born Ferdinand, 36, said he lost his job as an estate valuer shortly before his wife became pregnant with the Siamese twins in 2017.

According to him, though the family was without any means of livelihood during the pregnancy period, they were happy to be expecting a set of twins because their first child had died earlier that year at birth.

He said, however, that the family’s joy turned to sorrow when his wife was delivered of the co-joined twins in June this year.

“I lost my job almost the same period when my wife gave birth to our first child, a baby girl. She was dead at birth.

“That period was a defining moment for us but we picked courage and moved on with faith in God and in our destinies. Shortly afterwards, my wife conceived again.

“We first knew my wife was carrying a set of twin boys through a scan she undertook after eight months of pregnancy. We felt it was God’s way of recompensing our loss of the first child.

“So, I struggled to raise about N20,000 from relatives and friends in anticipation of my wife’s delivery. But, my troubles appeared to increase after she fell into an early but prolonged labour that almost took her life.

“Eventually, when she was delivered of the twins through a Caesarean Section, the birth was a roller coaster experience for us because the initial joy we felt in our hearts turned to sorrow after we saw them co-joined at the abdomen.

“I wept. I was confused. I felt the world was against me. I cried why me? I passed out at St. Mary’s Catholic Hospital in Gwagwalada where my wife put to bed.” Mr. Buzugbe said.

He further said that upon his regaining consciousness, the thought of how to abscond with his wife abandoning the children dominated his mind.

“I was almost losing my mind. I thought to myself ‘no job, house rent expired, mounting medical bills, and now these Siamese twins. How would they survived co-joined? But, the doctors assured me of the possibility of separating the babies when they are about five or six months old but that there were financial responsibilities to bear. At that point, I accept my fate,” he said.

Buzugbe added that the doctors later linked him with two NGOs, Aisha Children Foundation (ACF) and Global Initiative for Peace, Love and Care (GIPLC) which took up the responsibility for the welfare of the Siamese twins for the five months they waited before the successful separation.of the twins.

He also said that it was while the family waited for five-month period before the surgery that his erstwhile landlord kicked the family out of their along the Lugbe-Airport road; leaving them, to sleep in and around the hospital premises ever since.

First cries of my children was enough for me – Wife

For 31-year-old Mrs. Courage Buzugbe, the mother of the co-joined twins, in spite of the sadness she felt upon the realisation of the birth condition of her offspring, she was fulfilled to discover they were not still-born

“I was not really happy to find out they were co—joined but all I could ask was; ‘Did the children cry?’ In my previous birth experience, we never heard the cry of our daughter. When I was told they cried, I was consoled,”  She said. 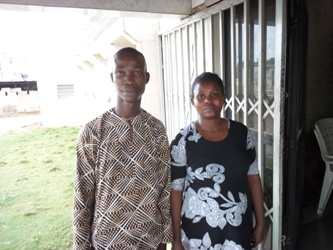 How Dogara came into the picture – Dr kwajafa

On his part, Dr. Nuhu Kwajafa of GIPLC, told Vanguard his NGO, last Thursday, merely posted a photograph of the co-joined twins on social media with a call for public support  to raise N1m for the needed surgery to separate the twins this Monday.

“About 10 minutes after the photograph went viral on Instagram, Rt. Hon Yakubu Dogara, sent a message saying ‘Consider it done’. He also followed that message up with a phone call.  To my surprise, the Speaker volunteered to pay the needed N1m. We wish to express our profound gratitude for his kind hearted and generous gesture towards the successful separation of the twins,” Kwajafa said.

Meanwhile, efforts to speak with the management of University of Abuja Teaching Hospital was not successful.

A senior management staff of the hospital, who asked not to be named, explained that the separated twins were being looked after at an intensive care facility;.

He added that until their condition stabilised and their survival was confirmed, it would be a violation of hospital policy to speak to the press on the matter.

However, the source assured that “as soon as these issues of survival and stability of the twins are confirmed, we would talk to the press and release details to the public,”