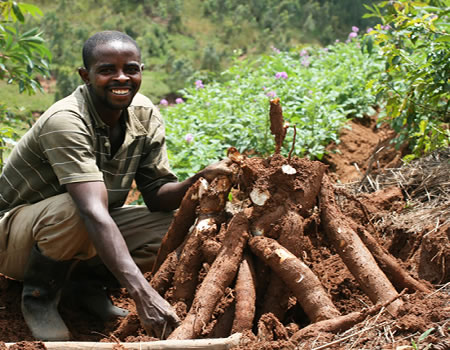 The objective of the training of trainers which took place recently in Abeokuta was to help farmers to minimise crop losses (cassava and maize) due to weeds infestation.

The three-day training, which was facilitated by IITA Digital Extension & Rural Advisory Services Specialist, Godwin Atser capitalised on successes/lessons learnt under the Cassava Weed Management Project of IITA which has merged with the African Cassava Agronomy Initiative (ACAI).

Value Chain Advisor of GIZ/SEDIN, Sunday Idahosa said weeds were a major challenge constraining the productivity of cassava, adding that in some instances, weeding takes from 50 – 80 per cent of labour budget for cassava production.

He noted that the training was a dream come true, stressing that it would create an open door for future collaboration between GIZ and IITA/ACAI.

“We are hoping that this Training of Trainers (ToT) would extend to about 1000 farmers from the step-down activities that will take place following the training,” Idahosa added.

The training was well received by participants. For Fatima Atanda, she said, “This training has improved my knowledge base as an agronomist, with access to rural farmers. As an N-power beneficiary, I can disseminate all I have been taught in the last three days.”

She described the IITA Herbicide Calculator which was given to participants free of charge as a great tool.

“The training has shown that the use of the calculator makes herbicide calibration a lot easier,” she said.

Another participant, Tolulope Aina, a cassava farmer and CEO of Tolulope Foods, a company that is into cassava value addition, said the materials given during the ToT were a great resource for training the farmers. “I can now teach the Six-steps to Cassava Weed Management,” she said.

Mrs Taiwo Ayansanwo, Program Manager for the Ogun State Agricultural Development Program (OGADEP), described the training on the Six Steps to Cassava Weed Management as a welcome development and called for more of such training in the state. She said that such regular training would build capacities and help in improving farmers’ knowledge on good farming practices such as record keeping, weed management and safe use of herbicides.

There was also a video demonstration of the Six Steps to Cassava Weed Management toolkit. Participants were also introduced to the IITA Herbicides Calculator mobile App which enables farmers to calibrate and know exactly the amount of herbicide to apply on any given field.