By Dapo Akinrefon
The Forum of Nigerian Leaders and Elders has picked holes in the outcome  of  the  February 23 presidential election, insisting that President Muhammadu Buhari’s victory is illegitimate. 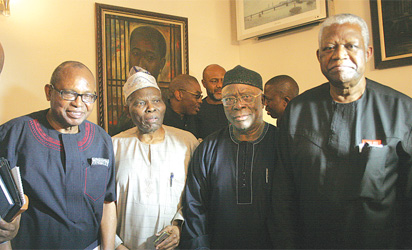 The ruling All Progressives Congress (APC) immediately fired back, saying the Forum’s position was irrelevant after Nigerians had spoken at the polls.

The Forum had, in the run-up to the general elections, endorsed the presidential candidate of the Peoples Democratic Party (PDP), Alhaji Atiku Abubakar, “on account of his understanding of the critical needs of the country at this time”.

In a communiqué issued at the end of a summit in Abuja on February 4, three weeks before the presidential and National Assembly elections, and read by the spokesman for Afenifere, Mr. Yinka Odumakin, the group emphasised that it adopted Atiku as consensus candidate for President “as he has demonstrated the deep understanding of the critical needs of the country at this time and possesses the capacity to proffer clear solutions in that respect.”

But presidential spokesperson, Garba Shehu, in a statement at that time, dismissed the position of the Forum,  saying that the PDP was only hiding in the “bunker of ethnicity” to avoid its inevitable defeat.

“The Forum commends the statesmanship and commitment to the democratic process of the PDP candidate, Alhaji Atiku Abubakar, GCON, Wazirin Adamawa, to exhaust the entire democratic process by challenging the results in the courts as provided for in the constitution. We see his decision as patriotic, responsible and ultimately the highest contribution to the democratic system. Some other person would by now be soaking  ‘baboons and dogs in blood”, the statement said.

It  observed  that the elections  revealed massive irregularities and outright abuse of the electoral laws, the rules and regulations of INEC as well as the failure of security forces to remain neutral and operate within the highest standards of their calling.

“The Peace Accord was ridiculed by deliberate and open abuse of organs of the state, the denial of rights of many citizens to vote and blatant abuse of all the commitments made by the administration. To decline to challenge obviously fictional figures, failures to respect key elements of the electoral process such as use of Smart Card Readers and preventing agents and observers access to all processes is to condone the massive setback which this election represents for the country”, the statement said.

“The outcome of the elections were clearly premeditated in the refusal of the President to sign the Electoral Act and the orchestrated suspension of Justice Walter Onoghen as the CJN shortly before the composition of Electoral Tribunals.

“The Forum calls on the judiciary to uphold the highest standards of integrity and commitment to its hallowed role by doing justice to the appeals that will come before it knowing that the eyes of the world would be on them .We are aware that attempts are being made to demoralize and intimidate the judiciary to remove a conducive context for litigations. We remind the judiciary that it is the last defence  of our democratic process.

“We recall that in endorsing the candidature of Atiku for the election ,we did anchor our support on identifying a candidate among many good candidates we interacted with who can retool Nigeria to move on the path of development as a true federal entity ,the pattern of voting in areas where there were semi- free elections showed an overwhelming endorsements of our position by popular votes. And the polls results have shown further a badly divided polity that needs a unifier and not a divisive person as a leader.

“We insist Nigerians must stand firm and ensure that they are governed by a legitimate leadership.”

Reacting to the Forum’s position, last night, the  APC, in a statement by the Chief Press Secretary to its National Chairman, Mr Simon Ebegbulem, said Buhari had the confidence of the people and it did not really matter what some factional leaders of a group said.

“We will not like to join issues with this Forum because President Muhammadu Buhari has won and there is no doubt that majority of Nigerians have spoken their minds at the ballot. This is time for fence mending and not time to respond to such issues. But we just want to make it clear that the election was free, fair and credible. And we are glad international observers have attested to it. You will also recall that a faction of the groups in this so-called Forum had earlier endorsed the President”, the statement said.

“Some of these people predicted doom before the election but God, in his infinite mercy, proved them wrong.

“President Buhari has the confidence of Nigerians and he will continue to enjoy the support of Nigerians for another four years and beyond”.