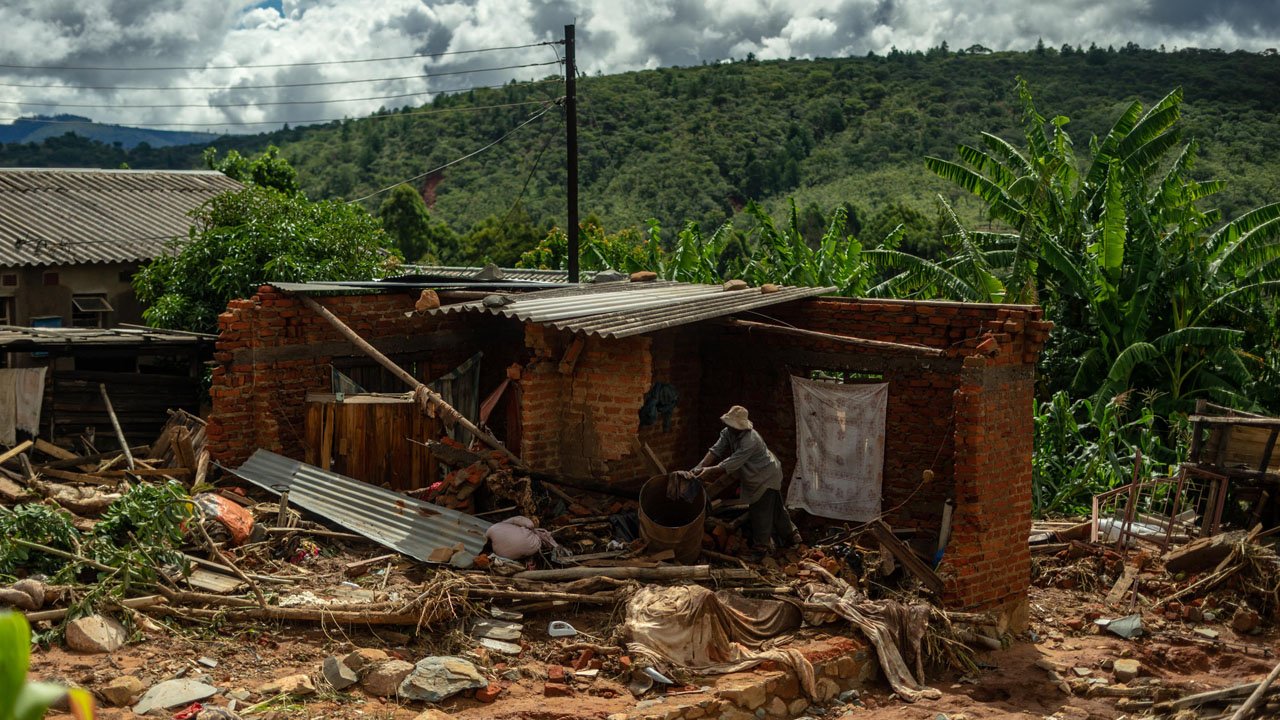 A man cleans up a destroyed house on March 19, 2019 in Chimanimani, as a hundred houses were damaged by the Cyclone Idai. – More than a thousand people are feared to have died in Mozambique alone while scores have been killed and more than 200 are missing in neighbouring Zimbabwe following the deadliest cyclone to hit southern Africa. Cyclone Idai tore into the centre of Mozambique on March 14 night before barreling on to neighbouring Zimbabwe, bringing flash floods and ferocious winds, and washing away roads and houses. (Photo by ZINYANGE AUNTONY / AFP)

Cyclone Idai smashed into Mozambique’s coast 10 days ago, unleashing hurricane-force wind and rain that flooded swathes of the poor country before battering eastern Zimbabwe — killing at least 705 people across the two nations.

While aid workers have been rushing to bring emergency aid to the hundreds of thousands of affected people, the head of the International Federation of Red Cross and Red Crescent Societies (IFRC) stressed the urgent need to focus on hygiene, sanitation and clean water.

“We are sitting on a ticking bomb,” Elhadj As Sy, IFRC Secretary-General told reporters in Geneva after returning from a weekend visit to Mozambique.

He pointed to the “high risk of water-borne diseases”, like cholera and typhus — as well as malaria, which is endemic in the region.

The United Nations has also warned that stagnant water in many areas, decomposing bodies and the lack of good sanitation in overcrowded shelters in Mozambique in particular could create breeding grounds for such diseases.

The government has already identified some suspected cases of cholera, still to be confirmed, Sy said.

But while a large-scale cholera outbreak following this kind of disaster would not be surprising, the worst could still be avoided, he said.

“That is the reason why I am raising the alarm. Many of these water-borne diseases are a great risk, but they are preventable,” he said.

‘Preparing for the worst’
The IFRC has deployed emergency response units to help improve hygiene, sanitation as well as clean water access, and Sy voiced optimism that this, joint with massive efforts by national authorities and other international players would pay off.

“We may not have this big outbreak,” he said, emphasising though that “all depends on the speed, the quality, the scale and the magnitude of the responses we bring.”

“We know how to prevent cholera, we know how to respond to cholera,” he said, adding that “we are already preparing … for the worst”.

More than two million people have been affected in Mozambique, Zimbabwe and Malawi where the storm started as a tropical depression causing flooding which killed 60 and displaced nearly a million people. Hundreds are still missing in Mozambique and Zimbabwe.

Sy said women and children had been disproportionately affected in the disaster.

“The worst thing is the children crying and looking for their parents… It is heartbreaking,” he said, adding that it remained unclear how many children may have been orphaned.

“But when I was on the ground…, we realised very, very quickly that this is not going to be anywhere near the scale and magnitude to make any difference,” Sy said.

The organisation had therefore tripled its appeal to 30 million francs, allowing it to reach some 200,000 people in need, he said.