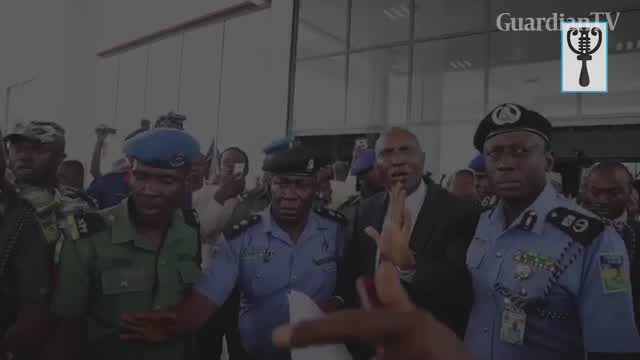 The Attorney-General of the Federation (AGF) Mr Abubakar Malami, (SAN) told the Federal High Court Abuja on Monday that the suspension of Sen. Ovie Omo-Agege was unconstitutional, illegal and unlawful.

Malami, who is the 3rd defendant in the ongoing suit brought by Omo-Agege challenging his suspension from the Senate, made his position known through his counsel, Mr Dayo Apata.

Apata, who doubles as the Solicitor-General of the Federation, in his submission, said that the role of the AGF was to defend and protect the constitution, adding that he had to react to any issue that had to do with the constitution.

“According to Section 4(8), 39, 40 of the Constitution and Articles of the African Charter on Human Rights, all the actions of the senate relating to the suspension of the plaintiff (Omo-Agege) are unconstitutional, illegal and unlawful.”

The solicitor-general urged the court to hold that the senate’s actions were unlawful.

Mr Mahmud Magaji (SAN), counsel to the Senate and the Senate President, in his submission, urged the court to dismiss the suit on the grounds that the senator had himself, participated in the suspension of other senators.

“The plaintiff is not an ordinary senator but a lawyer and a member of the Senate Committee on Ethics and Privileges.

“He has participated in several committee meetings leading to the suspension of other senators such as Ndume, so he who lives by the sword, should die by the sword.

“He who has participated in the suspension of his colleagues cannot now run to the court for protection.

“He swore to an oath to be bound by the rules of the senate, including the standing orders,” Magaji said.

Mr Alex Iziyon (SAN), counsel to Omo-Agege in his submission, prayed the court to consider what had been done by the senate as an affront to the dignity of the court.

Iziyon argued that the court had the powers to pull down what has been done by the senate.

He said this was on the grounds that while the matter was still pending in court, the senate went ahead and slammed the 90 legislative days suspension on his client.

Having listened to submissions from all the counsel, the judge, Justice Nnamdi Dimgba, adjourned the matter until May 10 to deliver judgment.

Mr Paul Erokoro (SAN), counsel to both senators, had urged the court to allow them to be joined as parties by virtue of the fact that they were chairman and vice chairman of the committee.

“They are necessary parties in this suit because it is the report their committee produced that the plaintiff seeks to impugned and set aside.

“Moreover, whatever decision the court takes will affect them and members of the committee because their personal conduct is being questioned,” Erokoro said.

Omo-Agege, who represents Delta Central Senatorial District, filed the suit to challenge his suspension from the senate.

He asked the court to among other reliefs, grant an order restraining the defendants, their servants, agents, privies or officers from interfering with his rights and privileges as a senator.