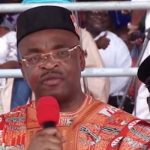 Akwa Ibom State House of Assembly has ratified the audited accounts of the state government which ended on December 31, 2016.

The ratification, which took place on Tuesday, followed the adoption of the report of the Public Accounts Committee of the House, as presented by the committee chairman, Mr Friday Iwok.

Submitting his report, Mr Iwok explained that the findings and recommendations in the audit report by the State Auditor-General were published in one volume.

“At the end of the painstaking exercise, the committee upheld and confirmed the state Auditor General’s recommendations in respect of 10 cases involving the sum of N259,435, which was fully recovered from the affected persons and remitted to government revenue accounts accordingly,” he told the House.

“The committee in its observation noted that Ministries, Departments and Agencies of government have embraced the arts of prompt retirement of imprest and proper records keeping, as recommended by the committee,” the lawmaker added.

He further advised the State Accountant General to always ensure that qualified and experienced accounting personnel are assigned to head the accounting departments, in order to minimise errors occasioned by inexperienced and unqualified staff.

In its resolution, the House commended the State Governor, Udom Emmanuel, for prudent management of state funds as appropriated by the legislative, and the zeal in ensuring that both the recurrent and capital expenditures of the state for the year were within the limits of the approved budget.

In his remarks, the Speaker of the House, Onofiok Luke, hailed the governor for his transparency in the management of state funds.

He said: “The legislature has ensured that through the instrumentality of its oversight responsibilities, Akwa Ibom people get nothing less than accountability from the government. Transparency and accountability were at the heart of the campaign by this administration when it sought the people’s mandate in 2015.”

According to the Speaker, almost three years down the road, there are clear pointers to the fact that this government has lived true to its promises.

Mr Luke noted further that on the part of the lawmakers, “The 6th Assembly, particularly, has leveraged every legislative machinery to promote probity and due process in the management of our resources.

“Accordingly, the consideration of the Auditor-General’s report by the Public Accounts Committee was a measure we adopted to ensure decency in the disbursement and use of public funds by Ministries, Departments and Agencies of state government, as stipulated by the Constitution of the Federal Republic of Nigeria.”

The Speaker also explained that the consideration of the House Committee on Public Account on Audited Account was aimed at ensuring prudence in the management of the state’s resources in line with Section 128 of the Constitution of the Federal Republic of Nigeria, 1999 (as amended).

He said the House is encouraged by the law to exercise its powers in a bid to ensure that the financial expenditure of MDAs are made public for assessment.

“Following a thorough work done by the Public Accounts Committee and the subsequent ratification of the report of the audited account of government for 2016 by this honourable House today, I want to thank His Excellency, the governor for the independence which he has availed this House to perform its constitutional responsibilities.

“The report of the Public Account Committee and the recommendations adopted today indicates how much we have committed ourselves as a House to ensuring accountability,” Luke added.

The Speaker was optimistic that Governor Emmanuel would assent to the Fiscal Responsibility Bill passed by the House, to further strengthen transparency and accountability in the state.

He also asked the Auditor-General to afford the House the opportunity to act more promptly on the 2017 audited report of the state by sending it in early enough.