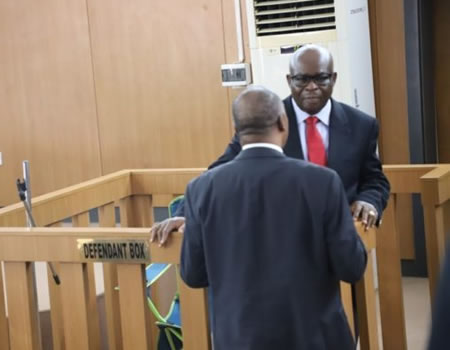 The Code of Conduct Tribunal  (CCT), sitting in Abuja, Friday,  dismissed the no case submission filed by the suspended Chief Justice of Nigeria (CJN), Justice Walter Onnoghen in the six-count charge preferred against him by the federal government.
The Federal Government, through the Code of Conduct Bureau (CCB), is prosecuting the suspended CJN on a six-count charge over alleged failure to declare his assets in line with the provisions of the law for public officers.
Delivering ruling on the no case submission yesterday, the chairman of the Tribunal, Danladi Umar held that the evidence adduced by the prosecution through its witness is weighty enough for the suspended CJN to open his defence if there is any.
Onnoghen had, through his team of lawyers, led by Chief  Adegboyega Awomolo (SAN) argued in the no case submission, that the prosecution failed to establish a prima facie case to prove the allegations preferred against him.
But, the prosecution counsel, Alhaji Aliu Umar (SAN) insisted that Onnoghen has a case to answer based on the testimonies of the three witnesses in the matter.
Onnoghen had asked the tribunal to dismiss and acquit him of the charge slammed against him by the federal government for lacking in merit.
The suspended CJN said the prosecution has not been able to establish a case against him on the grounds that the CCB did not substantially comply with its law in filing the charges against him.
According to Awomolo, CCB did not verify the form filled by Onnoghen as admitted by the second’s prosecution witness called by the prosecution
He argued that the assets declaration form, which Onnoghen is being accused of not filing properly was neither verified by the authorised persons nor the department saddled with the responsibilities to do so.
“That the defendant did not fill the assets declaration form, no investigation to show that it was done. Prosecution witness 2 said there is a register where all submitted forms are filed and a column to fill after investigating the form.
“The witness said neither the registrar, the director nor department officer investigated the defendant’s form”, he said and submitted further that the maker of exhibit one (petitioner) was not brought to the court to testify.
“The petition amount to hearsay and should be expunged from the record”, he said and cited section 84 of the Evidence Act that for an exhibit to succeed, the maker must present them, arguing further that exhibits 4 and 5 were presented by bank officials who were not the maker.
Delivering ruling, Umar held that the confessional statement of the defendant that he made a mistake by not mentioning his five accounts in Standard Chartered Bank was enough evidence to warrant that he enters his defence.
The CCT boss said he would not allow technicalities to arrive at a conclusion in the trial of Onnoghen and further held that the defence, rather than allowing the defendant to take punishment due to him for his confessional statement was out to prevent the tribunal from doing its job.
He stressed that the tribunal will not shy away from given punishment to anybody no matter his status in society, be it the president.
He said, “From the president to the shoe shiner on the street, we are one in the face of the law”.
He held that the exhibits and witnesses called by the prosecution were weighty enough to put the scale in the part of justice.
“We call on the defendant to enter his defence to clear his name because it has been detected so much”, he said and added that the no case submission is discountenanced and it is hereby refused and subsequently adjourned till Monday, April 1, 2019, for Onnoghen to enter his defence.
However, there was a mild drama shortly after Awomolo requested a short adjournment to enable his client to prepare effectively for his defence.
But the CCT chairman refused to grant the adjournment on the grounds that the trial must be conducted day to day in line with the provisions of the Administration of Criminal Justice Act ACJA, 2015.
All efforts to plead with the chairman to allow the adjournment so that the defendant can adequately prepare for his defence yielded no result as the chairman refused all entreaties leaving Onnoghen’s counsel, shouting for justice, justice.

At this point, tempers were flayed as lawyers from both sides engage each other on a shouting bout.
Meanwhile, the suspended CJN has filed a notice of appeal against the ruling of the tribunal on his no case submission.
In a Notice of Appeal, Onnoghen argued that the tribunal erred in law when they dismissed his no case submission without appreciating the position of the law that due process was not followed in the filing of charges against him.
The appellant claimed that the CCB is bound by the provisions of the Code of Conduct Standard Procedure, 2017 with respect to investigation and report of investigation.
In the notice of  Appeal, Onnoghen said the investigation has not been concluded as at January 10, when the charges were filed.
Onnoghen, therefore, prayed the court of Appeal to set aside the decision of the tribunal that he has a case to answer and to allow the appeal and discharge him from the charges against him.
Meanwhile, speaking with reporters outside the courtroom, Awomolo lamented the death of justice in Nigeria.
“We cannot fight corruption with the corrupt process. Righteous exhorts a nation while sin is a reproach. What we saw today is very regrettable. The chairman did not even allow two members of the panel to talk he just stood up and left.”