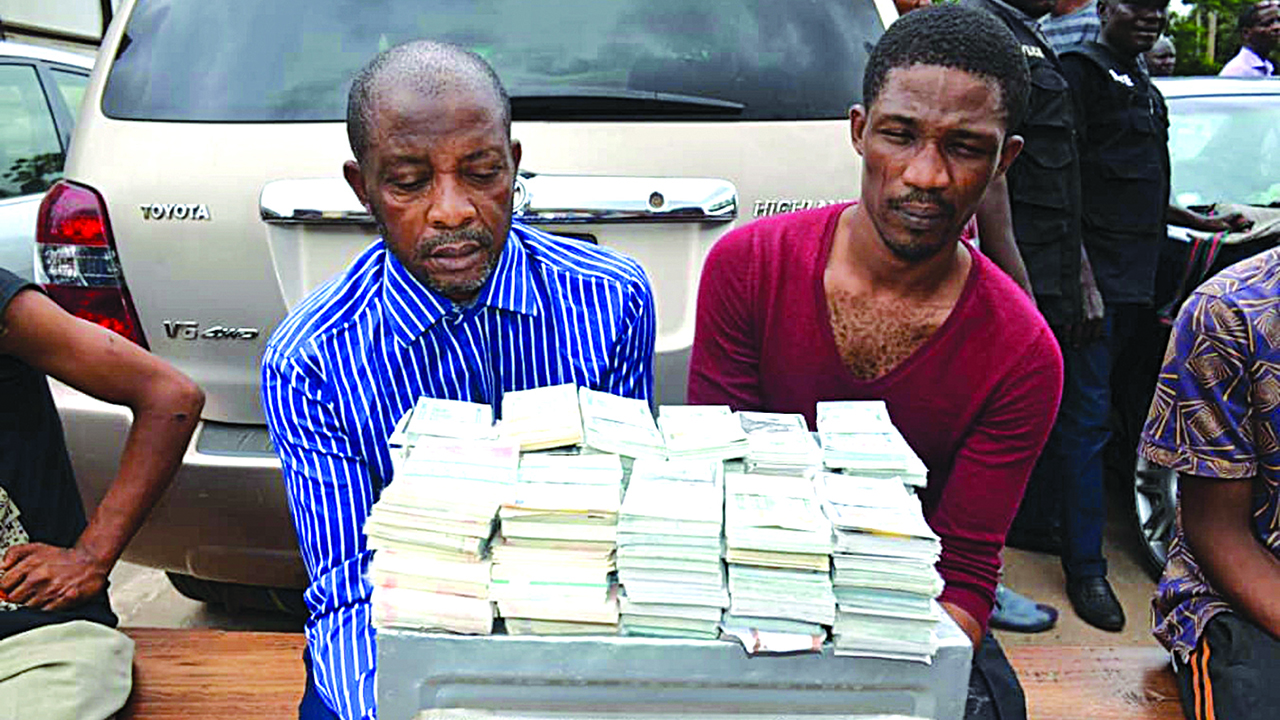 Two suspected fraudsters have been arrested while producing fake US Dollars with a view to defrauding unsuspecting members of the public.

The suspects, according to the police are also known as “wash wash” and they use the fake currencies for fraudulent activities within the Lagos metropolis.

The suspects, George Osagi, 51 and Makinde Kudus, 28 were arrested following complaint by members of the public.

One of the suspects, Osagie, said he joined the gang after a group swindled him.

He said the gang tricked him with the fake dollars and collected the sum of N300,000 from him on the pretense that they were going to buy chemicals to wash more Dollars.

He said: “I met the gang last year in a cab that was going to Ijesha.

I don’t know how they tricked me into it but I eventually followed them to a house where they showed me a briefcase containing various foreign currencies.

They succeeded in convincing me to part with the sum of N300,000.

The money was meant to purchase more chemicals to wash more money. I later realised that I had been defrauded.

To retrieve my money I was asked to join the gang.

“In the gang, my job is to act as a beneficiary in front of any would be victim.

This is to convince the victim that the deal is genuine and not fake. I get percentage in any successful deal.

Those who go about looking for victims are known as “Catchers”.

I was arrested in an hotel at Ilasa where we were staging a would be victim.”

The Commissioner of Police, Lagos State, Imohimi Edgal, who confirmed the incident said on July 28, the suspects were arrested based on credible information that was received from members of the public that there are some group of persons going round the metropolis, defrauding innocent citizens of their hard earned money by promising to double their money through magical means.

He said: “They were immediately searched and in the process, the following exhibits were recovered from them: two gallons of liquid labeled “Solen point”; a cash tank of US Dollars suspected to be fake; and Platinum Brokers International Incorporation documents.

“During interrogation, they confessed to have committed the crime and added that they are professional dupes.

That once they are able to bring out the greed in any person, he becomes an easy prey.”

Edgal said during interrogation it was discovered that the suspects had so far defrauded one Victoria Awoniyi of the sum of N5.7 million; Taiwo Kayode of N3 million and Adebisi Adebayo of N500,000.