You are here
Home > HEADLINES > ANALYSIS: Despite Obi, Buhari records highest votes ever in south-east

The elections are over. President Muhammadu Buhari has been declared the winner. Like us, we know you want to take a deep breath, have a good sleep, and stay away from the figures flying around every social media platform in the country.

But before we do that, or perhaps, while you do that, we have found some very interesting details jumping at us from the election results when compared to previous polling statistics.

TheCable sieves the wheat from the chaff and brings you our views — visual and simple — on some of the most influential political and economic stories in the country and beyond. 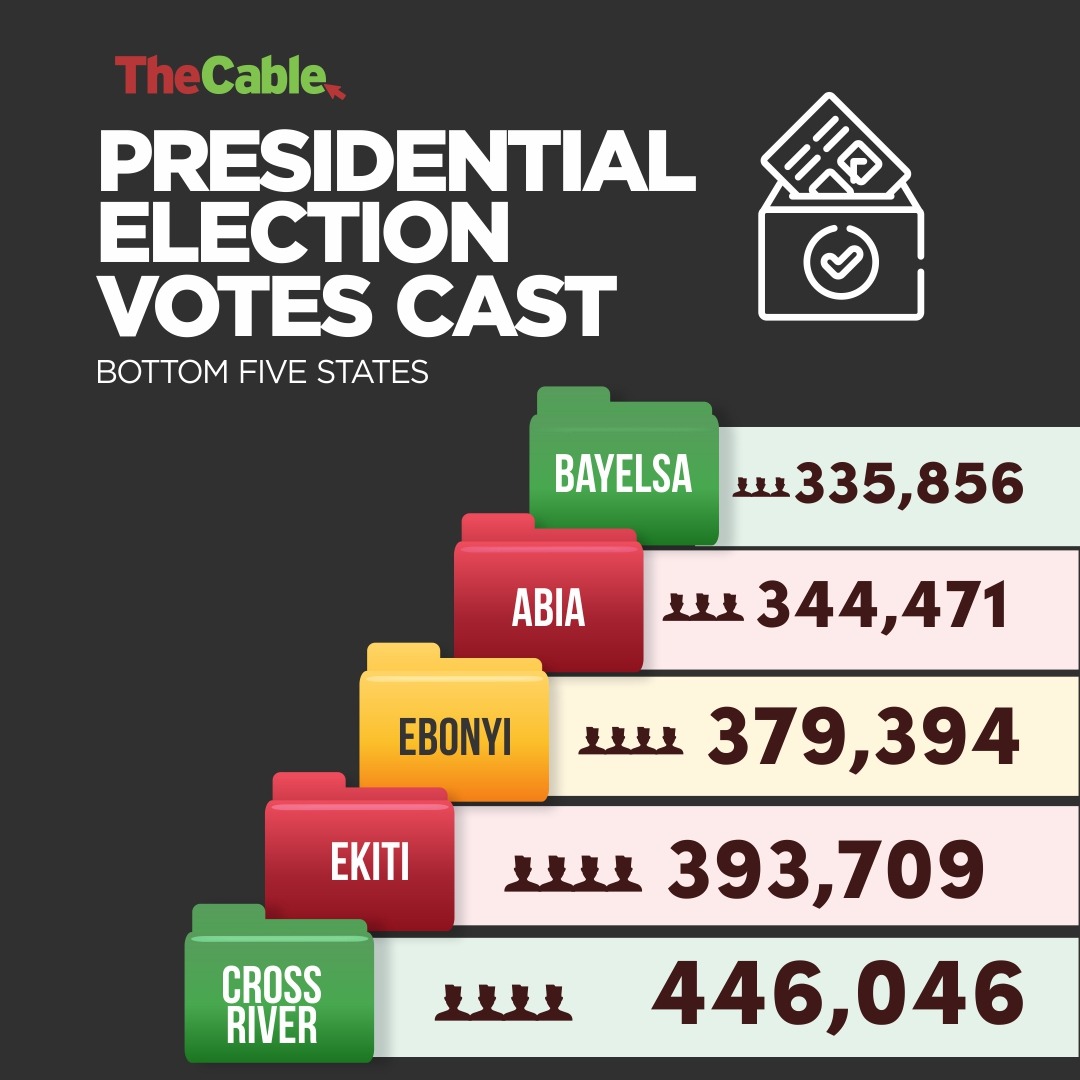 President Muhammadu Buhari has been popular in the north since he began running for the highest elective office in Nigeria back in 2003. For every election till date, Buhari has polled nothing less than six million votes, most of which were from the north. In fact, save the discredited 2007 election, Buhari has a constant 12 million votes, which are predominantly northern.

In 2015, his appeal spread to the south following an alliance with the Action Congress of Nigeria (ACN) which ended in the formation of the All Progressives Congress (APC). This ensured that Buhari got some three million votes from the region.

But in all his years of running for office, Buhari always failed woefully in the south-east geopolitical zone of the country — until 2019. In 2015, despite his southern appeal, Buhari polled only 198,248 votes in the region.

For 2019, he was expected to get even less following the opposition’s decision to tap Peter Obi, former south-eastern governor, as its vice-presidential candidate. Despite Obi, Buhari went on to poll 403,968 votes in the south-east — his highest ever!

He scored 25 percent or more in three states — this is the first time he would hit the threshold in any south-eastern state.

Some of the reasons advanced for this include the fact that he was friendly with many of the governors from the zone and had done projects many could identify with. His political appointees also worked hard for him.

Buhari, Enyioma I of Ebonyi and Ochioha Ndi Igbo I, has indeed become more popular in the south-east.

QUICK FACT: Buhari polled over million votes from the south-south, the highest he ever recorded from the zone. 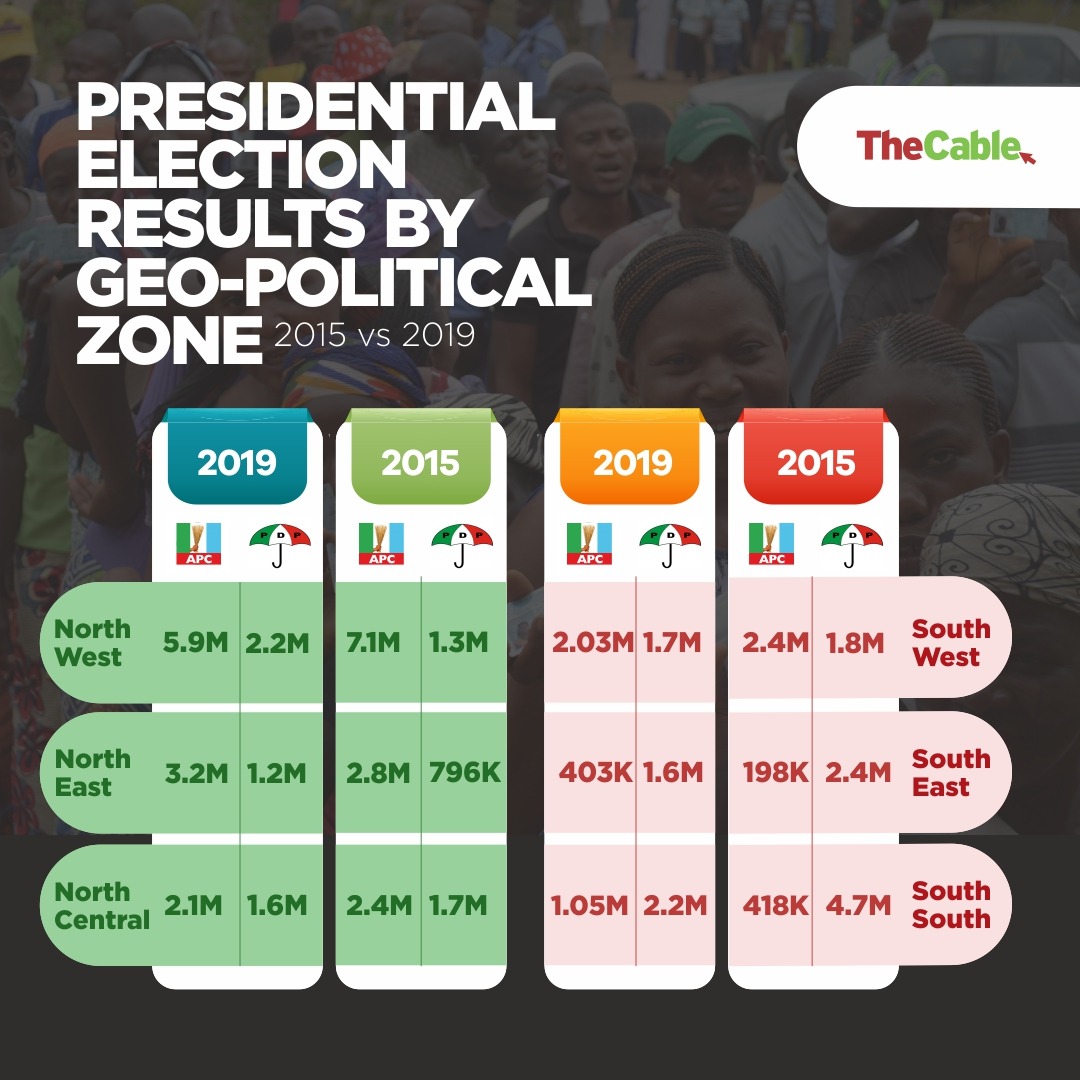 Sai Baba! The only man, tested and proven capable of pulling 12 million votes in northern Nigeria, seems to have become less popular in the region.

In 2015, Buhari polled 12,374,890 votes from the region — north-east, north-west, and north-central. For 2019, however, despite over five million increase in registered voters in the region, Buhari was only able to muster 11,352,365 votes from the region. This shows the president could not keep his 2015 followership, neither could he woo new voters to come his way.

It can also be argued that Buhari lost the votes because another northerner, Atiku Abubakar, was his core opposition. Whatever the case is, one thing is clear: not all those who voted for Buhari in 2015 gave him their thumb for the 2019 election.

STATES YOU MUST WIN TO LEAD NIGERIA 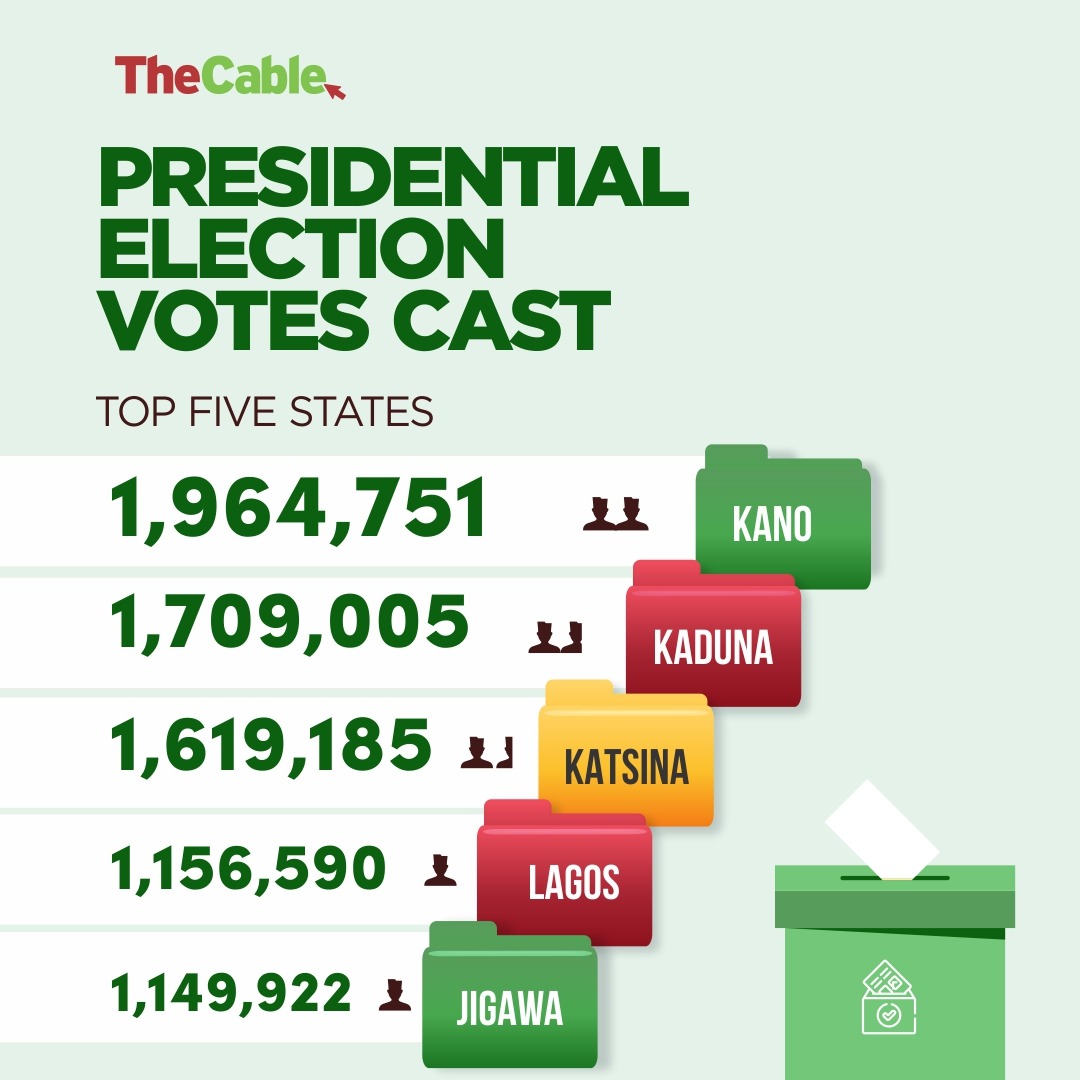 Did you say Kano and Lagos? Absolutely. You may want to add Kaduna and Katsina. But by the figures, Lagos has proven to be the most important state when it comes to voting in Nigeria. Everyone, except Yar’Adua, who has become Nigeria’s president in the fourth republic has had to win Lagos state.

Goodluck Jonathan became president without winning Kano, Kaduna and Katsina in 2011. He lost in 2015 when he failed to win Lagos, although victory in Lagos might not have amounted to his re-election, mathematically speaking. Call it a myth: win Lagos, win Nigeria.

The outlier for the 2019 election is Jigawa! Jigawa had the highest turnout in the election, with 71 percent of PVCs collected translating into real votes. Not just used as ID cards, as seen in many southern states.

QUICK FACT: Since 1999, Atiku is the only politician to have won Lagos, and still lose the presidential elections. He won Lagos in 2007. 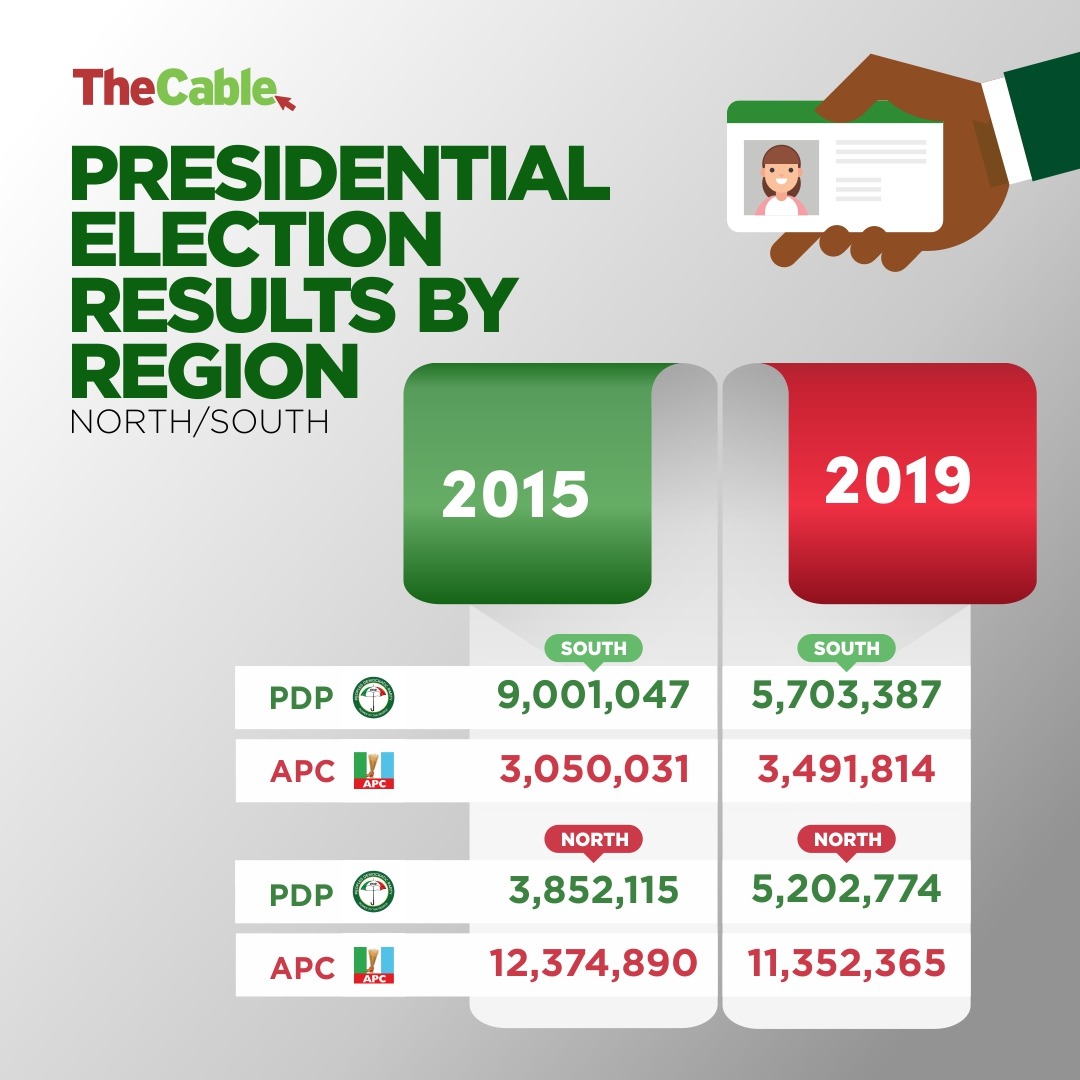 Earlier in the week, the north was trending for its role in Nigeria’s election. While some were throwing abusive words at southerners for not voting, many were blessing northerners for coming out to make Buhari president.

Constitutionally, you need both parts of the country to win a presidential election in Nigeria. But one part of the country has continually determined the way Nigerian elections pan out.

Some were raining curses on Lord Frederick Lugard, who merged northern and southern British protectorates to found Nigeria in 1914. But it is not Lugard who is responsible for the structure of present-day Nigeria, but our civilian and military leaders.

Pre-independence, the north had more seats in parliament than the south; Nigerian Peoples Congress (NPC) had 134 seats in the 1959 elections, while the National Council of Nigerian Citizens (NCNC), which was predominantly Igbo had 89 seats. The Action Group, by the Yoruba had just 73 seats. So, it’s always been north ahead of the south.

This would later become more entrenched through state creation by Yakubu Gowon, Murtala Muhammad and Ibrahim Babangida, who ensured the north continued to possess more states than the south. Perhaps, the northern landmass is twice the southern territory.

For the 2019 election, there were 10,193,875 votes cast in the southern region of the country, and 18,370,215 votes from the north. You cannot blame Lugard for southern apathy, but you can blame the military for giving more states to the north. But in the end, the population of voters will determine the elections not the number of states in a region.

QUICK FACT: There are only five states in south-east and seven in the north-west. 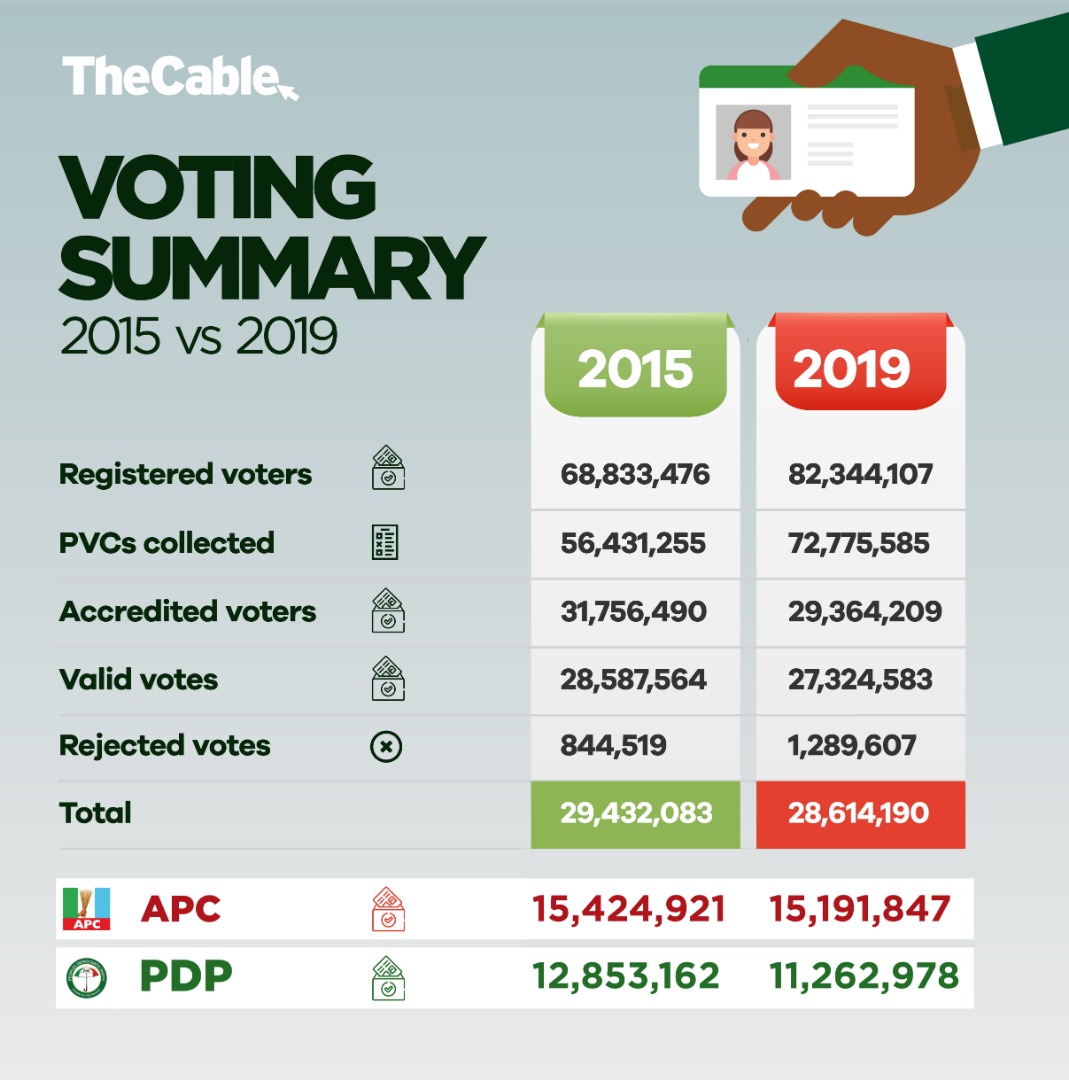 When Mahmood Yakubu, chairman of the Independent National Electoral Commission (INEC), said 72 million Nigerians had picked up their voter cards, out of the 82 million registered voters, Nigerians were elated. We expected a voting average of say 40 million to 50 million.

QUICK FACT: Of every 100 Nigerian who picked up their PVCs, only 35 voted in this election.

Is the Nigerian voter losing interest in politics altogether?