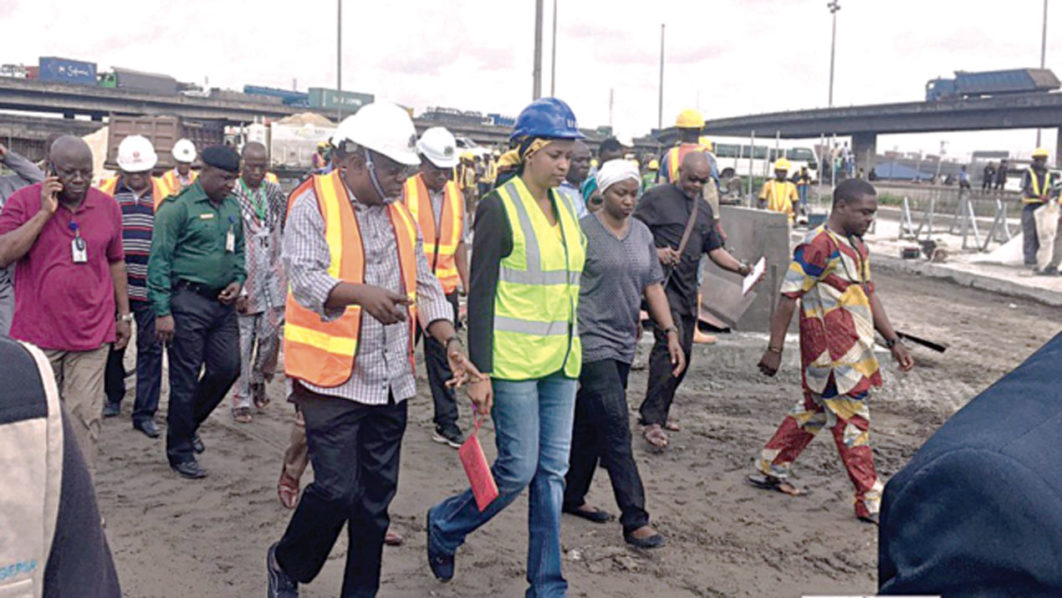 The News Agency of Nigeria (NAN) reports that the Project Director, Mr Bosun Kalejaiye and the Project Manager, Mr Tunde Jimoh, amde this known on Sunday in Lagos during an inspection of the road.

Kalejiaye told journalists that the outbound section had been completed, while the second part, inbound Apapa, had recorded 25 per cent progress, saying that the entire project was 75 per cent completed.

He said that the firm had deployed more personnel and equipment to recover the time lost during relocation of underground and surface utilities in the Right of Way (RoW) of the project.

“Our focus is to finish the project, good quality works by July.

“Our commitment is total. We have brought in additional equipment to speed up. That is why we are focused on finishing the concrete pavement by July,’’ he said.

Kalejaiye said that the issue of high vehicular traffic on the axis was being properly managed by the Traffic Consultant of the project, MIS Advisory.

“Presently, we are 75 per cent completed; the balance of 25 per cent would be completed this month.

“The configuration of the road is about 80cm. Imagine a road with a thickness like this.

“This is one of its kind here (Nigeria); considering the kind of high traffic we have here (Apapa).

“We have a sub-grade stabilised with hardcore. After the stabilisation with hardcore, we have impermeable layer which is 10cm of sand cement.

“Apart from that, we also have the sub-soil drainage that drains out the water underneath the sand cement. Afterwards, we have the stone base which is about 200mm well compacted.

“On top of this 200mm stone base, we are having our 250mm rigid pavement which is re-enforced with 10mm mesh,’’ he said.

Jimoh explained that beyond additional layers for durability, the road surface would be completed with an asphalt overlay of 50mm.

Mr Patrick Adenusi of the MIS Advisory Services, however, lamented smoke and dust pollution, reckless driving, and assault on his team by overzealous law enforcement agents as the team managed traffic around the construction area.

Adenusi however, commended heads of law enforcement units who had punished erring officers to stem the tide of assault on traffic consultants on site.

“It has been hectic, tough, rough, risky and dangerous,’’ he said.

In a related development, the Corporate Communications Department of the Dangote Group noted that the 44km Obajana-Kabba concrete road in Kogi, which links the North and South, would be delivered in December.

“Nigeria’s longest concrete road project will be delivered by December.

Chiejina quoted Kalejaiye to have said that the road project was part of the Corporate Social Responsibility (CRS) of the Dangote Cement Plc.

“Mr Kalejaiye assured newsmen on tour of the project at the weekend (Saturday) that there is nothing to worry. We will deliver the 43km rigid pavement by December,’’ he said.

According to him, the Project Manager, Mr Akhimienho Emmanuel, said that the road was expected to last more than 50 years.

Chiejina noted that traditional and community leaders praised the President of the Dangote Group, Alhaji Aliko Dangote, for bringing “this massive road project to their land’’.

He said that the Bajana of Obajana Land, King Idowu Senibi; the Traditional Head of Akpata Land, Frederick Durojaiye Balogun; and the King of Okebunku Land in Kabba Bunu Local Government, Timothy Omonile; all praised the project that brought relevance to their kingdoms,’’

Chiejina noted the excitement of road users on the axis, who said that the construction had brought succor, removed hardship faced in the area and improved commercial activities.

He said that some road users called for universal adoption of concrete roads construction in the country to deal with road collapses and failures across the nation.

Chiejina recalled that as part of its CRS, the Dangote Group had earlier commissioned the 26 km Itori-Ibese Concrete Road, where it received accolades from the Minister of Power, Works and Housing, Mr Babatunde Fashola.