You are here
Home > All Progressives Congress > APC can rig only isolated elections, says Atiku group 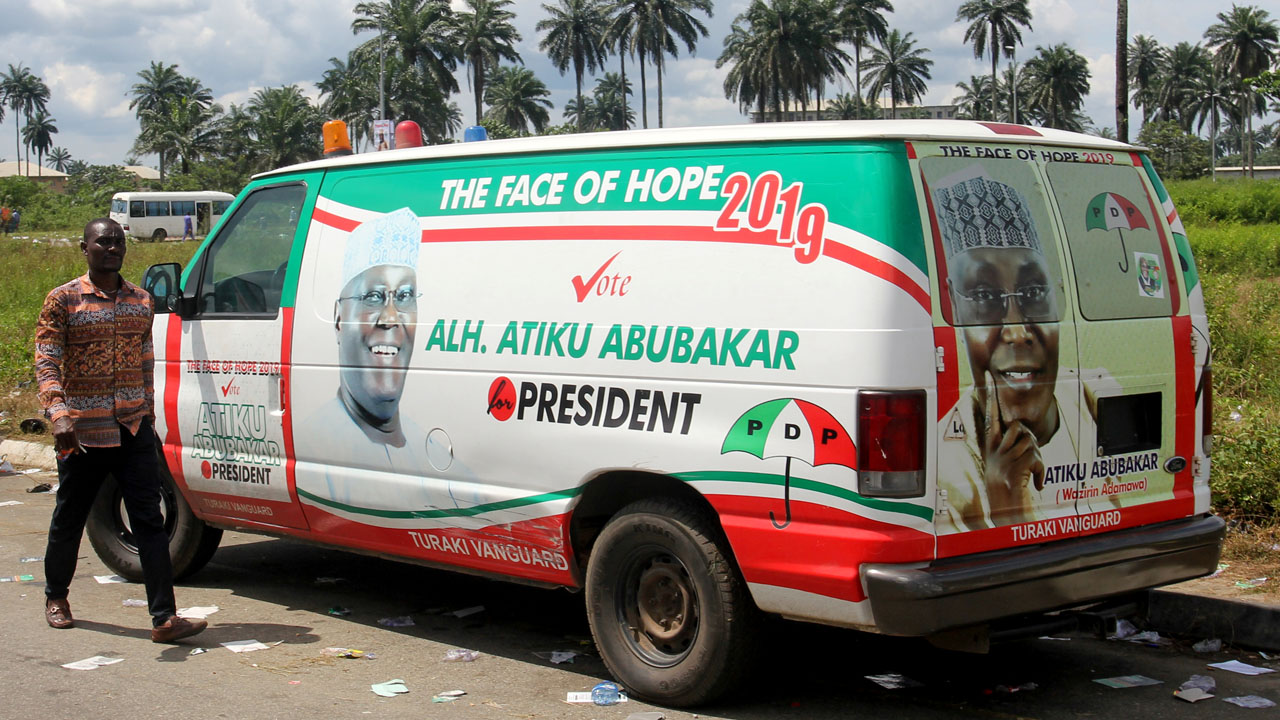 [FILE PHOTO] A man walks past a van decorated with pictures of Atiku Abubakar, a former vice president, in the southern city of Port Harcourt in the Niger Delta, Nigeria October 7, 2018. REUTERS/Tife Owolabi

A group, Atiku Volunteer Network (AVN), has said the All Progressives Congress (APC) succeeded in allegedly rigging out the Peoples Democratic Party (PDP) in Osun and Ekiti states as well as Kogi State by-election because the polls were isolated.

The National Coordinator of AVN, Okpanachi Jacobs, who spoke to The Guardian in Lokoja during the inauguration of the group’s office in the town at the weekend, said the office would also serve the purpose of an archive where people can get information on the PDP presidential candidate.

According to him, the APC has degenerated to such a level that democracy is now being dreaded over fear of rigging and intimidation during elections.

“A time will come when it will be the decision of Nigeria. It happened in Osun, Ekiti, Kogi and others because the elections were staggered, they were not general elections. However, during the general election, everybody would be on the field on the same day and same time, and it would be difficult to rig.”

On Atiku’s chances, Jacobs said it was very obvious that they were getting brighter than before.

“The chances are very high because the Atiku’s project, as it is, is a Nigerian project. If you look at it from every angle, you will see that Nigerians have trust in the change, but unfortunately they now have a different thing from what they voted in 2015.

“Nigerians are longing for change, the actual change. I mean Atiku as a formidable candidate because he has been hammering on some issues which are the major problems of Nigeria: restructuring and unemployment.

“As things stand now, unemployment is nothing to write home about, it keeps increasing and I hope you’re aware that the current human development index has shown that Nigeria is ranked among countries like Malawi, Chad and Niger, those that were looking up to us as a big brothers in those days,” he said.

Also at the weekend, THE YES Atiku Movement, one of the support groups for the PDP presidential, urged Nigerians to vote out President Muhammadu Buhari.

The group accused the Buhari-led administration of high handedness and being clueless, a situation it said was not only worrisome but capable of setting the country ablaze if not voted out of power next year.

At the kick off of the Atiku campaign for the 2019 election in Lagos, the Deputy State Coordinator of the movement, Mr. Babatunde Idowu, said Nigeria had become more insecure now than it was under erstwhile President Goodluck Jonathan.