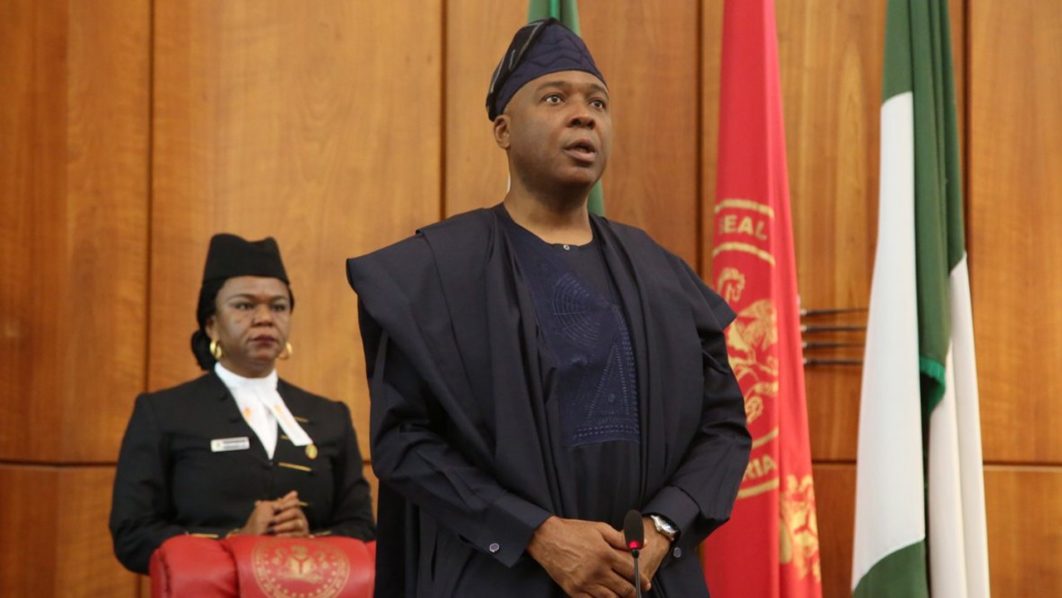 The plot to impeach Senate President Bukola Saraki thickened yesterday as federal lawmakers on the platform of the All Progressives Congress (APC) resolved to forcibly reconvene the National Assembly and carry out the plan.

During a meeting with APC national chairman, Adams Oshiomhole, at the Abuja Sheraton Hotel and Towers, the legislators from both chambers of the assembly vowed they would deploy their numerical strength to achieve the goal ‘‘in the interest of the country.’’

Oshiomhole, who thanked the lawmakers for keeping faith with the ideals of the party, stressed that with APC’s 196 of the 360-strong House of Representatives and 56 of 109 senators, the coast was clear to take binding decisions.

He faulted claims that the President Muhammadu Buhari-led administration was behind the siege by security operatives on the assembly complex last week and charged the APC senators to proceed notwithstanding arguments by some legal minds.

He also dismissed reports that he presided over a meeting of senators at his residence last Monday night.

“Do whatever needs to be done to prevent a government shutdown.

Democracy teaches us that minority has the right to have their say but majority must have their way,” Oshiomhole said.

“We take flights to Washington and other places to understudy the American presidential system.

Once you lose majority, without further ado, you step down.

Whether it is convenient for Saraki or not, the truth is whether by morality or by law or by convention, he can only avoid impeachment by toeing the path of honour.

Step down, so that APC can take over the leadership of the House.

“Saraki will be lawfully and democratically impeached.

Those lawyers, who have chosen to sit as judges, when he is impeached, will be free to go anywhere and canvass the legality or the illegality of the action.

It is not in their place to pronounce with finality, as if they constitute the judicial arm of government.

“As the governing party, I reassure the Nigerian people that we are committed to leading by example.

And that means absolute submission and obedience to the letters and spirit of the Nigerian constitution and everything we will do, we will ensure that it is done according to law including the impeachment of Saraki.

There is no hiding place for him. I insist that his time is up.”

Senate Leader Ahmed Lawan hinted that the chamber could reconvene today or tomorrow.

He faulted reports that some members were bribed with millions of naira to execute the impeachment and warned that the nation could be plunged into constitutional crises if Buhari’s request of money for the 2019 general elections was not approved urgently.

Speaker of the House of Representatives Yakubu Dogara was absent.

His deputy, Sulaimon Yusuff Lasun, expressed disappointment over the last minute decision to halt a reconvening of the assembly.

House Leader Femi Gbajabiamila said Finance Minister Kemi Adeosun briefed him that that the implementation of the capital component of the budget risks being aborted by the end of August, if Buhari’s request was not approved.

“We have to find a way to reconvene the House.

We are heading towards a constitutional crisis and inevitable government shutdown because we have to fund the election and the budget,” he said.

In a statement, the APC also alleged that the opposition Peoples Democratic Party (PDP) was planning to hire thugs to attack its own lawmakers.

The presidency, meanwhile, clarified yesterday that the 2018 Electoral Bill passed by the national assembly July 24 and forwarded to Buhari for assent on August 3 was pending.

The clarification came against the backdrop of reports that Buhari had again vetoed the bill.

The presidency also debunked rumours that Buhari was under pressure to jettison his bid for a second term.

“President Buhari is not a flippant or fr­ivolous individual.

He gave deep thought­ to the prospect before announcing his ­bid for a second term in office,” said Special Adviser on Media and Publicity Femi Adesina.