ABUJA – National Chairman of the All Progressives Congress, APC, Comrade Adams Oshiomhole, yesterday, challenged those who lost out in the recent party primaries to emulate the comportment of President Muhammadu Buhari who lost three presidential polls before the 2015 success.

His admonition was immediately rebuffed by Governor Rochas Okorocha of Imo State who pooh-poohed Oshiomhole’s accusation of building a family dynasty. 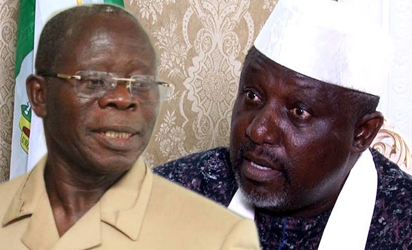 He said whereas he was the only Okorocha in government or party of reckoning, the governor listed four persons he said were immediate relatives of Oshiomhole, serving in the Edo State government or with party tickets.

The governor, it was learned, has asked them to wait for a meeting of the National Executive Committee, NEC, of the APC being contemplated for this week before a final decision.

Associates of the two governors, had positioned themselves in alternative political platforms that could be unveiled this week.

Speaking to journalists in Benin City, Edo State, shortly after a church service to mark the second anniversary of the Godwin Obaseki administration, Oshiomhole also denied recent reports that he visited Asiwaju Bola Tinubu in Europe.

“I think the people should just accept that there will always be a winner, that you didn’t win today does not mean you will not win tomorrow and there is no better example than the fact that our President, Muhammdau Buhari, lost three times, but he did not give up; in the fourth attempt, he won.

“There is a lot to learn from that, it is a long distance race, and only those who have capacity for long distance will venture into the business of politics, Oshiomhole said.”

On his alleged visit to Tinubu in London, Oshiomhole said: “What am I going to do in London?  The truth is that when you are a leader and, as they say, the tree that bears fruit will always attract stones from those who want to pluck and those who are just hungry.

‘’Why will I go to London to see Tinubu when I can see him in Bourdillon? And what are the issues between him and me that I am going to resolve with him? The leader of the party, who is the President of Nigeria, I have access to him anytime, so I don’t need to go to London, through the Queen, to reach my own leader in Lagos, it doesn’t make sense.”

Oshiomhole’s admonition was, however, rebuffed by Governor Okorocha who challenged the national chairman’s claims of probity in the discharge of his duties.

He particularly challenged Oshiomhole’s assertion at a media session, last weekend, that the party stopped Uche Nwosu’s approval as governorship candidate in order not to create an Okorocha dynasty through his son-in-law.

In a statement articulated by his Chief Press Secretary, Mr. Sam Onwuemeodo, the Imo State governor listed four persons he identified as Oshiomhole’s relatives in the Edo State government or with a ticket of the APC.

He said:  “To say the least, Adams Oshiomhole is the “father of family dynasty or nepotism or “familiocracy.” Uche Nwosu is from Nkwerre Local Government, while Rochas Okorocha is from Ideato South LGA.

‘’They have no relationship aside from the in-law issue. The only relation of Governor Okorocha who is in his government is Ogechi Ololo from Owerri North. She does not answer Ogechi Okorocha. There is no other direct or indirect relation of Okorocha in his government. So, as it stands now, Rochas is the only Okorocha running an election.

“Yakubu Oshiomhole is the Secretary to the Local Government Commission; Dr. Cyril Adams Oshiomhole is vying for the House of Representatives for Etsako Federal Constituency.

“With all these, between Rochas Okorocha, whose only relation in government is Ogechi Ololo from Owerri North and Adams Oshiomhole who has the Oshiomholes in government or contesting positions, who should be accused of building a dynasty or running a “familiocracy”?

The Imo State governor also took offence at the conduct of Alhaji Ahmed Gulak, the chairman of the panel first sent by Oshiomhole to conduct Imo State primaries, declaring the former presidential adviser and Governor Oshiomhole of having formed an unholy alliance to derail Imo APC nomination process.

Noting that Oshiomhole disbanded the Gulak committee and appointed a replacement panel,

He said:  “Alhaji Gulak didn’t wait to conduct the primaries. He fled Owerri. And he told the world that he fled Owerri by 4:30 a.m. because there was a kidnap attempt on his person. The Secretary of the Committee, Henry Idahagbon from Edo State with seven other members who stayed behind, went ahead with the primaries and Uche Nwosu won the governorship primary.

“However, Comrade Oshiomhole told Nigerians that he had disbanded the Gulak committee and discarded all that came out of that committee and promised to set up a new one. In line with his promise, he set up another 13-member committee, led by Brigadier-General Ibrahim Agbabiaka.

“On October 6, 2018, the Agbabiaka Committee conducted the primaries and Uche Nwosu won that of the governorship. The Prof. Osunbor Appeal Panel also looked at the whole scenario and also declared Uche Nwosu candidate of the party. These are our narratives. Let Adams Oshiomhole or Gulak contradict us.

“A month after his first account of kidnap attempt, Alhaji Gulak began to talk about two million dollars bribe and other petty stories. It took him a whole month to remember the bribe angle. He didn’t talk about the kidnap attempt again.”

Hope Uzodinma’s name was published as the APC candidate at 7.52 p.m. on Friday, 10 hours after the publication of the names of the other party candidates.

A source told Vanguard: “Immediately, the court struck out the order by the Okorocha faction stopping the name of Senator Uzodimma, the judgment was taken to the National headquarters of INEC, and an order was given that the name of Hope should be pasted immediately.

“When the order came to INEC in Owerri, the administrative head was not on seat but the legal adviser received the order from the National headquarters, and he went on.

But Nwosu was insistent that he stood on good legal grounds, saying “my candidacy is not in contention as there are reports from relevant agencies affirming the October 6 primary election which I won, including that of the Police, DSS, and INEC.

‘’So I am not worried about what is happening now because I know that it will only last for a while and my candidacy will be restored. I have faith in the court to dispense justice.

“I am confident that all the irregularities perpetrated by Oshiomhole will be reversed and the will of the members of our great party will prevail.

“I want you to remember that the Gulak Committee was subsequently disbanded and a new Committee, led by Ibrahim Agbabiaka, a retired Army General, was constituted to conduct a fresh governorship primary, which I, Nwosu, won.

Meanwhile, Governor Amosun was at the weekend pondering his options upon pressure from some supporters to leave the party, following the decision of the party to drop all 26 of his associates in the list of candidates for the State House of Assembly. That action was besides the positioning of Dapo Abiodun as the party’s governorship candidate for Ogun State.

Amosun’s difficulty is compounded by his personal relationship with President Buhari and his appointment as the APC’s Ogun Central Senatorial candidate.

Vanguard gathered that Amosun’s loyalists were putting serious pressure on their leader to join them in the journey to the new party.

The 26 associates, who were proposed by Amosun for House of Assembly tickets, Vanguard gathered, are among those championing the agitation for the outgoing governor’s defection.

One option being contemplated was for the governor to remain in the APC, while his associates would find shelter elsewhere.

The governor, it was gathered, was as at yesterday reassuring his associates of the prospects of recovery, especially with agitation for a NEC meeting this week.

The state executive of the party is also said to be in the dilemma of how to relate with the official governorship candidate of the party, Dapo Abiodun.

A reliable source told Vanguard that some members of the executive might stay put in the party, even if Amosun urges a switch as they seek to retain their influence in the state.

Meanwhile, Governor Amosun has been blamed for the circumstances facing him and his associates and is being urged to reconcile with former Governor Segun Osoba and Asiwaju Tinubu.

A former  member  of the House of Representatives, Abiodun Abudu-Balogun who represented Ijebu North, Ijebu East, and Ogun Waterside Federal Constituency, while speaking on behalf of supporters of Osoba in an interview said: “On the day of congresses, he (Amosun) came with a prepared list for party positions, and we were just told to vote and affirm, and since we had made up our minds that we don’t want crisis again within the party in the state, we just allowed the sleeping dog to lie.

“For the party primaries, Mr. Governor wrote 40 names for all the 40 offices in a state that is as sophisticated as Ogun State calling it consensus arrangement. Who reached the consensus? Where was it reached?

“I don’t know because I was an aspirant for House of Representatives for Ijebu North, Ijebu East, and Ogun Waterside Federal Constituency. Nobody reached any consensus with me.

“The governor as far as I’m concerned, is the cause of the crisis arising from the primaries. He wrote 40 names and did not carry anybody along and failed to consult anyone, even the leader of the party in the state, at least the national leader, Chief Olusegun Osoba.

‘’If the governor is the leader of the party in the state, by APC arrangement, we have a national leader in the state. How would my governor be promoting candidates’ names, not even courtesy of going to meet Osoba, to reconcile with him as regards the primaries?

Mutterings over Egba’s defection to PDP persist in Bayelsa

‘’He never did that. He was all alone nominating people for 40 elective positions. Where is that one done in a political party?

“All other aspirants feel that the governor was trying to short-change them, more so that we have agreed at our stakeholders’ meeting as directed by the national leadership of the party that we should go for direct primaries.”