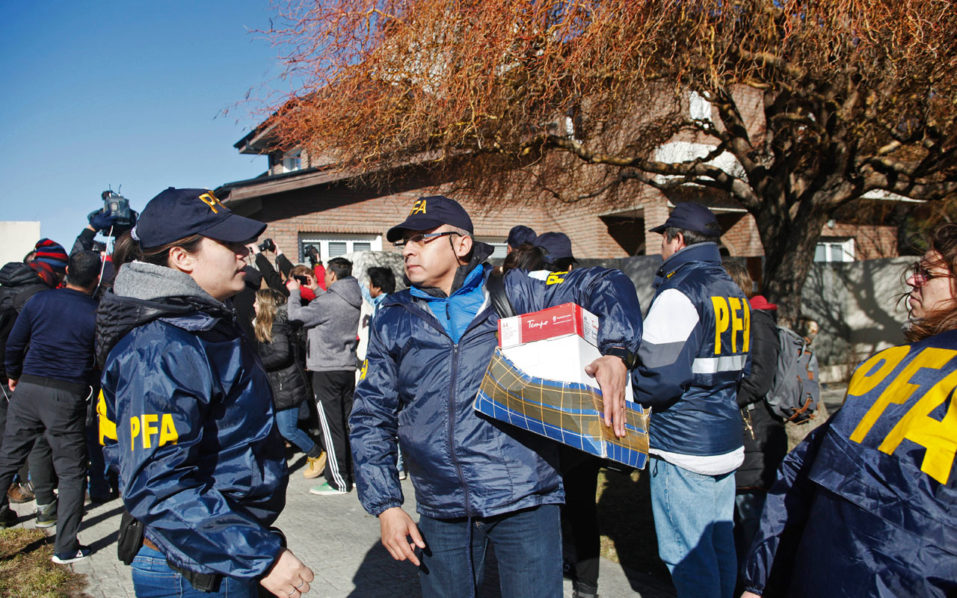 The Argentine Federal Police (PFA) takes part in a raid at the house of former Argentine President and current senator Cristina Fernandez de Kirchner in Rio Gallegos, Santa Cruz Province, in southern Argentina, as part of the so-called corruption notebooks case, on August 23, 2018. The move came after judge Claudio Bonadio successfully petitioned the Senate on Wednesday to partially lift Kirchner’s parliamentary immunity so her three residences could be searched for evidence of multi-million dollar bribes paid by businessmen in exchange for public works contracts during her administration. As a senator, Kirchner enjoys congressional immunity from imprisonment, though not prosecution. / AFP PHOTO / Walter Diaz

Police accompanied by sniffer dogs searched the homes of Argentina’s former president Cristina Kirchner on Thursday as the investigation intensified into the so-called “notebooks” corruption scandal that has rocked the country.

The move came one day after judge Claudio Bonadio, who is leading the investigation into the multi-million-dollar bribery case, successfully petitioned the Senate to partially lift Kirchner’s congressional immunity to accommodate the searches.

Police are hunting for evidence that the leftist former leader (2007-2015) presided over a kickbacks scheme in which she and others in her administration accepted millions of dollars from businessmen in exchange for public works contracts.

As a senator, Kirchner enjoys congressional immunity from imprisonment, but not from prosecution.

Later in the afternoon, another search warrant was executed at Kirchner’s vast country getaway in Rio Gallegos in the southern Patagonia region.

Simultaneously, police raided a convent on the outskirts of Buenos Aires where two years ago, another Kirchner administration official, Jose Lopez, was caught red-handed trying to hide a bag containing $8 million in cash.

Local media said the search of Kirchner’s third home in El Calafate, also in Patagonia, had not yet begun.

Kirchner’s lawyer, Carlos Beraldi, was left fuming after he was ejected from the fifth floor Buenos Aires apartment on Bonadio’s orders during the search.

“This is a farce! It’s a clear violation of the rule of law,” said Beraldi, vowing to make a criminal complaint against the judge.

On Wednesday, Kirchner had denounced in a fiery and defiant speech to the Senate what she called “political persecution” but the 65-year-old, like all the other 66 senators present, approved the petition.

She had told lawmakers in a letter that she was willing to allow searches of her three homes on condition that investigators did not allow any filming or photography, though she complained that she was “going to be the first elected senator to be searched.”

But she opted to avoid the search circus Thursday, spending the night before at her daughter Florencia’s home, according to another lawyer, Gregorio Dalbon.

Driver’s meticulous records
More than a dozen elite businessmen and former government officials were arrested after La Nacion newspaper reported on August 1 that millions in bribes were delivered by a ministerial chauffeur to Kirchner’s residences, during both her presidency and that of her late husband Nestor.

The driver’s meticulous records of the alleged cash deliveries — the “notebooks” — form the basis of Bonadio’s investigation.

According to driver Oscar Centeno’s bombshell evidence, the Kirchner residence in Buenos Aires was the venue for the handover of millions of dollars in cash.

Prosecutor Carlos Stornelli has said a total of $160 million in bribes was handed over during a 10-year period from 2005-2015.

Earlier this month, Amado Boudou, a former vice president under Kirchner, was sentenced to almost six years in prison after he was found guilty of “passive bribery” and conduct “incompatible” with his duties as a public servant.

Kirchner is being investigated in five other cases, ranging from alleged foreign exchange manipulation to the signing of a memorandum with Tehran that Bonadio argues effectively protected Iranian suspects in the deadly 1994 bombing of an Argentine Jewish center.

She claims her political opponents are trying to derail her possible run for the presidency next year.

‘Cover up’
Still one of Argentina’s most popular politicians, Kirchner said last week she was the victim of a right-wing effort across Latin America to discredit the work of previous leftist governments.

Ana Almiron of Kirchner’s Front for Victory party questioned “the purpose and the need for the search.”

“They are trying to cover up the truth of what’s happening in Argentina,” she said, alluding to an economic crisis that has forced President Mauricio Macri to agree to a $50 billion loan from the International Monetary Fund.

Eduardo Costa, from Macri’s center-right Cambiemos coalition, said it was time “to repair the damage that corruption and officials do to the Argentine people.”