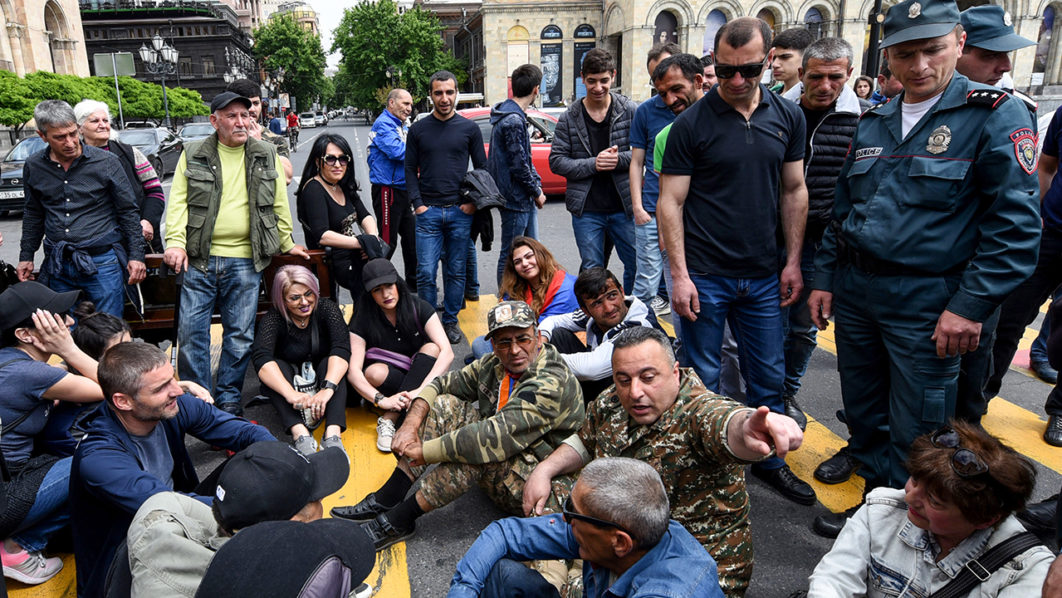 Supporters of Armenia’s protest leader Nikol Pashinyan took to the streets Sunday, hoping that a massive show of force will propel the opposition leader to power in a key election in two days.

“We are witnessing a decisive moment,” said Arut Khachatryan, a 17-year-old high school pupil, adding that the ruling Republican Party should quit politics.

Vartan Madatyan, a 34-year-old accountant, added: “We will continue protests until the people’s candidate comes to power.”

“I hope that the Republicans will have enough common sense not to cling to power, and vote for Nikol.”

Ex-Soviet Armenia has been in the grip of a severe political crisis for the past two weeks, with the country’s veteran leader Serzh Sarkisian stepping down after a decade in power in the face of major protests.

Opposition lawmaker Pashinyan, 42, has thrown down the gauntlet, saying his colleagues in parliament should elect him to succeed Sarkisian as prime minister in Tuesday’s vote.

– Crunch time –
On Saturday, after days of frantic negotiations, two major parties said they would back Pashinyan, but he was still six votes short of the 53 he needs from the 105-seat legislature.

He needs the backing of some members of the ruling Republican Party, which has 58 seats.

The party has said it will wait until all candidates are nominated by Monday and then decide who to back.

Pashinyan — who is the leader of the small Civil Contract party — has been the only candidate nominated for the country’s top job so far.

Eduard Sharmazanov, vice speaker of parliament and the ruling party’s spokesman, has said he personally doubted that Pashinyan was a suitable candidate.

In a bid to break the deadlock and drum up support, Pashinyan also called on his supporters to stage a major rally on Sunday evening.

“Our fantastic rallies and meetings across the country have affected the situation in a powerful way,” he told supporters in a video address.

“Everything will be fine, we just need to consolidate our victory.”

The Prosperous Armenia Party, which holds 31 seats, threw its weight behind Pashinyan on Saturday.

A smaller party, the Armenian Revolutionary Federation, quit the ruling coalition and said it would also back the opposition leader.

– ‘Rats from a sinking ship’ –
Some analysts said they expected a number of Republican Party lawmakers to defect and give their votes to the protest leader, sealing his victory.

“I am sure that at least six people from the Republican Party — — like rats from a sinking ship — would vote for Pashinyan,” said analyst Ervand Bozoyan.

Observers have expressed fears that the turmoil could destabilise the Moscow-allied nation which has been locked in a territorial dispute with Azerbaijan for decades.

Moscow has urged compromise and Russian President Vladimir Putin earlier this week spoke by phone with the interim head of government, stressing the importance of the upcoming election.

As supporters took to the streets Sunday, Pashinyan met with a number of Russian lawmakers, telling them his premiership would not threaten the South Caucasus country’s close ties with Moscow.

One of the Kremlin’s closest allies, Armenia hosts a Russian military base and is dependent on investments and aid from Moscow.

The United States on Saturday urged “good faith” in negotiations, with a State Department statement calling for “a resolution that reflects the interests of all Armenians.”

On Friday and Saturday, Pashinyan received a hero’s welcome in a number of towns and villages outside the capital as he drove around the landlocked country with his supporters in a convoy.

Sarkisian, who became prime minister on April 17 after serving a decade as president in what was seen by opponents as a power grab, resigned on Monday after 10 days of protests.

The opposition has accused him of having failed as president to tackle poverty, corruption and the influence of oligarchs in the country of 2.9 million people.