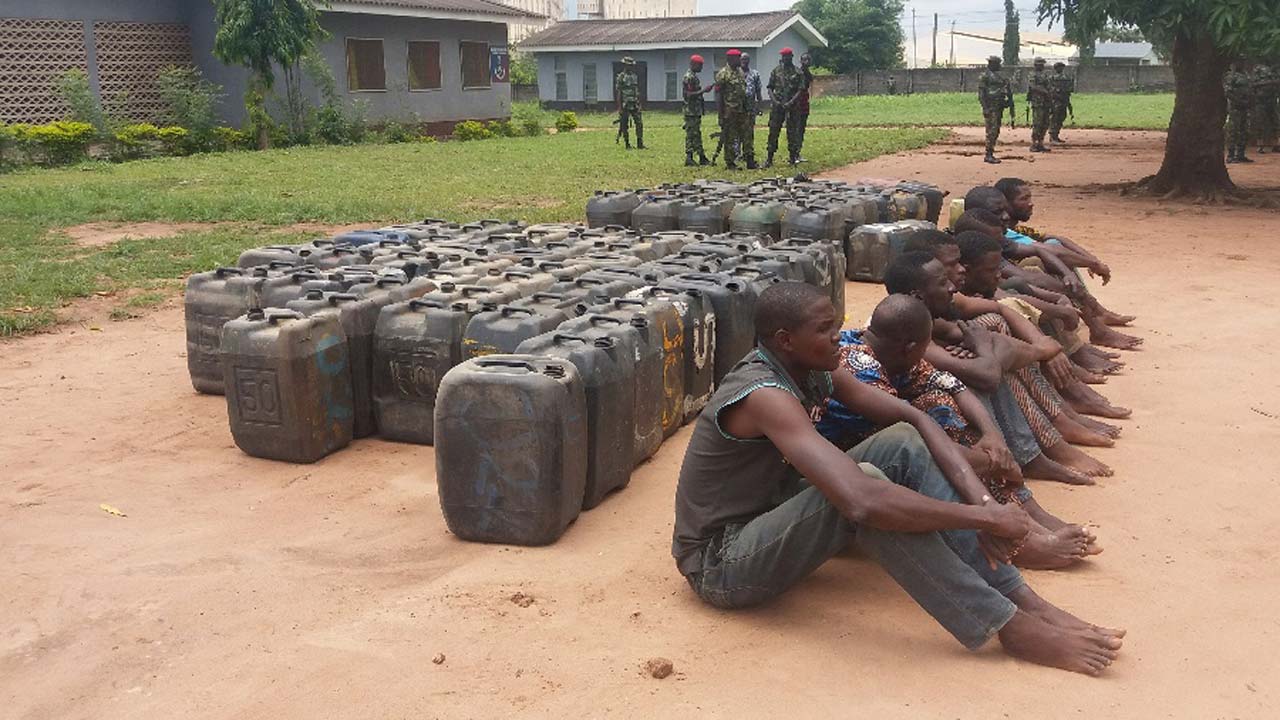 The Nigerian Army said on Saturday that it arrested 23 suspected cultists, who were conducting physical training for new recruits, initiation, robbery and kidnapping.The army also said that it arrested 15 other persons suspected to be pipeline vandals and recovered 31 jerry cans of refined petroleum products in the process.

Maj.-Gen. Enobong Udoh, the General Officer Commanding (GOC), 81 Division of the Nigerian Army, made this known at a news conference at the 174 Battalion, Ikorodu area of Lagos.

Udoh was represented by the Brigade Commander, Brig.-Gen. Moundhey Ali.The GOC, who said the suspects were arrested at different times and locations, explained that the arrests were a result of intensive surveillance and intelligence report.

“In continuation of the crackdown on criminal elements and cultists in and around Lagos and Ogun states, the troops of 81 Division arrested 23 suspected cultists in Ikorodu area on April 16.

“Over 50 suspected cultists from “Eiye” confraternity were conducting physical training for new recruits, initiation and planning for robbery and kidnap activities.

“Their arrest was preceded by a shootout between the troops of 174 Battalion Ikorodu and the cultists after which, 23 of the suspected cultists were arrested while others escaped,’’ he said.

The GOC said that two of the suspects sustained gunshot wounds, adding that one of the suspected newly-recruited cultists died as a result of injuries inflicted on him during the cult initiation.

“However, one of our gallant soldiers, while combatting the cultists sustained a gunshot wound on his left leg during the encounter and was immediately evacuated.

“The soldier and the 2 wounded cultists are receiving treatment at the Battalion’s Medical Reception Station.

“Also recovered from them are one parcel containing substance suspected to be Indian hemp. Others are two ATM cards, eight identity cards, nine passport photographs, packets of condom, rings and a variety of charms,’’ he said.

The GOC further said that the troops of the 81 Division also raided some suspected pipeline vandals at Ilara and Imagbon areas of Ikorodu to stop them from vandalising the country’s pipelines.

“The suspected vandals, armed with AK-47 rifles, fired sporadically and fled on sighting the troops.

“During the operation, sabotaged portions of the Nigerian National Petroleum Corporation (NNPC) pipelines were observed in Imoro Creek in Imagbon.

“Items recovered from them include: one wooden boat, 40 empty jerry cans each weighing 50 litres and a 1,000-metre-long hose, ostensibly used in siphoning products by the suspected vandals.

“The recovered items were destroyed and no arrest was made,’’ Udoh said.

The GOC also said that seven impersonators were arrested alongside eight suspected vandals on April 17 in Lagos and Ogun states.

“While on anti-bunkering patrol along Imoro Creek in Ikorodu, troops discovered sabotaged points along the NNPC Pipeline including a loading area in the Creek for siphoned products where eight suspected vandals were arrested.

“Another set of 1,320 empty Jerry cans were also discovered and destroyed.

“In addition, seven suspected impostors were arrested by troops while on operation CHECKMATE,’’ he said.

Udoh expressed appreciation to the general public and particularly the people of Lagos and Ogun states for their continuous cooperation.

He urged them to always give timely information that would help the Division in its operations.

He pledged not to relent until the Area of Responsibility of the division was completely rid of all forms of cultism, vandalism and other violent criminal activities and elements.

“The suspects are undergoing preliminary investigation after which they will be handed over to the appropriate security agencies for further investigations and prosecution,’’ he said.