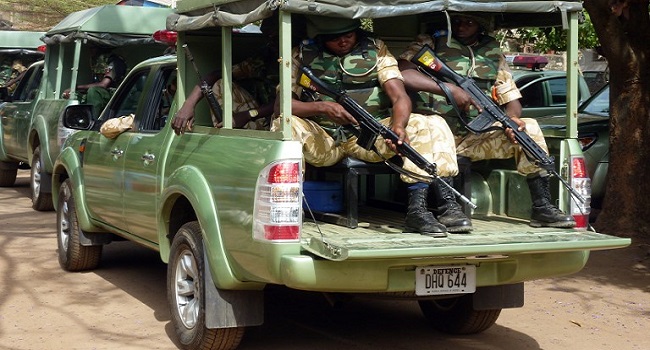 Officials of the Independent National Electoral Commission (INEC) have accused officers of the Nigeria Army of interfering with and disrupting collation of results in Rivers State.

Narrating his ordeal at the Rivers East Senatorial district collation centre in Port Harcourt yesterday, he said before the results were snatched, soldiers threatened the collation officials by shooting sporadically into the air.

At the end of polls, there were heavy gunshots. Electoral officials could not collate form EC 8a at the polling units. They opted to come to INEC office in Okrika for solace and to continue filling form EC 8a.

“During collation for ward level, a team of soldiers led by one Captain Inuwa ordered the suspension of collation. He ordered his men to take away all materials, including results being collated by the collation officials.

“The materials were carted away with nothing left for me to present as evidence for the election. As I speak, I have no record or results to present for collation in this centre,” he added.

Another Electoral Officer at Ikwerre Local Government Area, Mrs. Mary Imawuya, also disclosed that there was no collation of Saturday’s elections in the council because soldiers invaded INEC’s Office at Isiokpo.

She said: “Between 7pm and 8pm on Saturday, February 23, 2019, the military invaded INEC Office at Isiokpo and walked out every ad-hoc staff who were there to present their results to the Collation Officers. The evidence is still there. We took recordings.

“At the end of the day, there was no collation. The results of the Collation Officers, issued to them, was retrieved by me and returned to the INEC State Office,” she stated.

She explained that the military personnel did not allow the ad-hoc staff to carry out collation in their wards hence permission was sought from INEC for collation to be put on hold at INEC’s Office in Isiokpo.

The same experience played out at the Emohua Local Government Area, where the Electoral Officer, Kenneth Etah, blamed massive shootings for disruption of collation at the council.

“As I speak, I do not have any results to present for Emohua area because collation did not take place. This was due to sporadic shootings that disrupted the process.

“There was pandemonium and everything was scattered. After one hour of shootings, security officials evacuated us to the council hall.