Nigeria’s Aruna Quadri and female compatriot Offiong Edem are into the semi finals of the 2018 ITTF-Africa Top 16 Cup,  being decided in Nairobi. 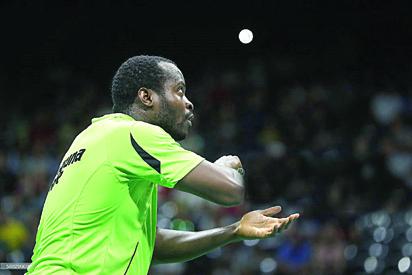 Both the semi-finals and finals will be played today.

In the Men’s Singles event Egypt is very much in evidence; in the penultimate round Omar Assar, the top seed, faces Congo Brazzaville’s Saheed Idowu, Ahmed Ali Saleh, the no.3 seed, opposes Nigeria’s Quadri Aruna.

Listed at no.16 on the current Men’s World Rankings, Omar Assar starts as the clear favourite against Saheed Idowu, named at no.311 but the two have never met in recent times on the international stage and it would appear Omar Assar has some concerns.

“I’m very happy to reach the semi-finals. I’m also very happy for each win because here the conditions are not normal. Some players are playing well because they are used to playing in high altitude but the players who play at normal altitude cannot even put two or three balls on the table. So this makes it a little bit interesting. I really don’t know, it’s very interesting that the organizers came here to play, the altitude is really very unique.” Omar Assar

A first meeting for Omar Assar and Saheed Idowu; not for Quadri Aruna and Ahmed Ali Saleh; they are no strangers. Notably, in world ranking events, Ahmed Ali Saleh won the five encounters starting with the success at the 2010 African Championships in Yaoundé.

However, the most recent two engagements have gone the way of Quadri Aruna; he succeeded at the 2015 African Games in Congo Brazzaville and at the 2016 African Championships in Agadir.

Meanwhile, when past results are taken into account both Dina Meshref and Sarah Hanffou start as favourites. At the African Games in 2011 in Maputo, Dina Meshref lost to Offiong Edem but one must remember she was only 16 years when she experienced the defeat. Ever since that date, eight meetings in succession, Dina Meshref has won on each occasion.

It is not too dissimilar a situation for Sarah Hanffou; three contests against Lynda Loghraibi; she has won all three, the most recent being the 2016 Olympic Qualification tournament in Khartoum.