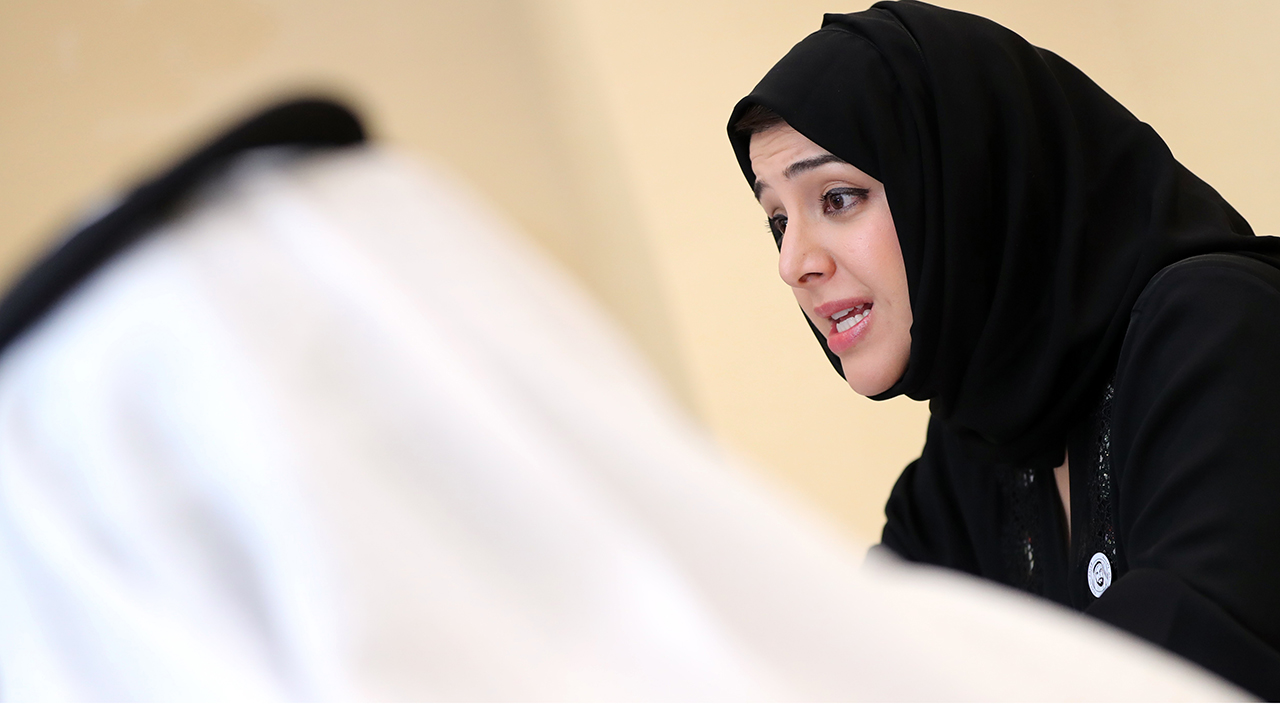 Reem al-Hashemi, UAE State Minister for International Cooperation, speaks during a press briefing in the capital Abu Dhabi on June 26, 2018, about the humanitarian stuation in Hodeida. / AFP PHOTO / KARIM SAHIB

The United Arab Emirates on Sunday announced it had halted the offensive it is backing against Huthi rebels in Yemen’s port city of Hodeida, to give a chance to UN diplomatic efforts.

In a series of tweets, UAE Minister of State for Foreign Affairs Anwar Gargash said the pause was aimed at pursuing negotiations for an unconditional rebel withdrawal from the port but warned that full military action could resume.

The weeks-long offensive on Hodeida — Yemen’s main port — has raised fears of further suffering and deprivation in a country already deeply shaken by years of war between the Iran-backed Huthis and President Abedrabbo Mansour Hadi’s Gulf-backed government.

Pointing to a renewed push for a negotiated settlement by UN envoy Martin Griffiths, Gargash said: “We have paused our campaign to allow enough time for this option to be fully explored. We hope he will succeed.”

He said the pause had been in effect since June 23 and while there was continued “pressure on the parameter”, pro-government forces were awaiting the results of an upcoming visit by Griffiths to the rebel-held capital Sanaa.

Griffiths met with Hadi in the southern city of Aden on Wednesday and is reported to be pushing for the Huthis to cede control of Hodeida to the United Nations.

Hadi demanded a full rebel withdrawal from the city, which has been the target of a weeks-long military offensive by the Yemeni government and its regional allies, led by the UAE on the ground.

The rebels have said they may be willing to share control of Hodeida’s port with the United Nations but say their forces must remain in the docks and the rest of the Red Sea city.

– ‘Forcing concessions’ –
The Huthis have controlled Hodeida and its port since 2014, when they drove the Hadi government out of the capital and seized large swathes of northern Yemen.

On June 13, the UAE and its allies, including Saudi Arabia, launched a massive military operation — dubbed “Golden Victory” — to drive the rebels out of the port.

Pro-government forces managed to seize control of Hodeida’s airport in mid-June after days of heavy fighting but did not immediately push forward into the city, home to some 600,000 people and about 150 kilometres (90 miles) west of Sanaa.

Gargash said the operation has succeeded in “forcing the Huthis to make concessions” but said it remained to be seen “whether the Huthis are engaging seriously with this process or using it as a tactic to buy time”.

“Failing these patient efforts we believe that continued military pressure will ultimately bring the liberation of Hodeida and force the Huthis to engage seriously in negotiations.”

Some 70 percent of imports to Yemen, where eight million people face imminent famine, flow through the port of Hodeida.

Nearly 10,000 people have died in the Yemen war since 2015, when Saudi Arabia and its allies joined the government’s fight against the Huthis.

More than 30,000 residents of Hodeida and the province of the same name had fled their homes since the start of the offensive.