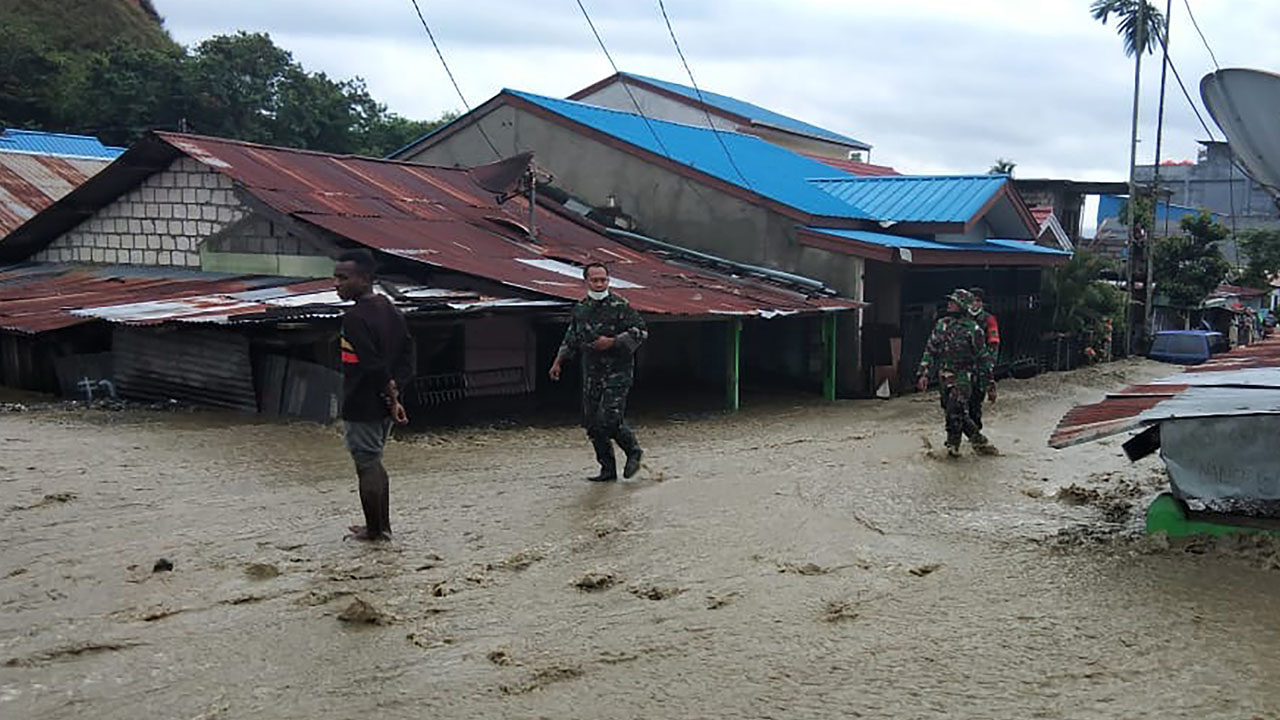 This handout picture taken and released by Indonesia Military on March 18, 2019 shows soldiers looking for survivors in a flooded area in Sentani. – Flash floods in Indonesia’s eastern Papua province have killed at least 77 people, the disaster agency said on March 18 as it raised the death toll from 58. (Photo by Handout / INDONESIA MILITARY / AFP) /

A baby trapped under rubble after flash flooding destroyed his home in Indonesia has been reunited with his father after the disaster killed the rest of their family, officials said Monday, as the death toll hit 77.

The five-month old was plucked Sunday from debris inside a house where his mother and siblings were found dead in the hard-hit northeastern town of Sentani.

The tot has since been returned to his surviving father.

“We took the baby to the hospital and had him treated,” Papua military spokesman Muhammad Aidi told AFP.

“He was in stable condition and has been released. The father was distressed but happy to be reunited with his baby.”

Scores have been injured in the disaster, triggered by torrential rain and landslides on Saturday.

Rescuers battled mud, rocks and fallen trees in the hunt for survivors, as medical personnel treated the wounded in makeshift tents.

The military said 5,700 people have been evacuated from the hard-hit area.

“We have over 1,000 personnel searching for more victims,” Aidi said.

Indonesia has issued a 14-day state of emergency in response to the floods.

Papua shares a border with independent Papua New Guinea on an island just north of Australia.

Meanwhile, three people were killed — including two Malaysian tourists — and some 182 were injured after an earthquake Sunday triggered a landslide on the Indonesian tourist island of Lombok, next to Bali.

The 5.5-magnitude quake is thought to have caused the landslide at the Tiu Kelep waterfall in the north of the island.

Lombok was rocked by several earthquakes last summer, killing more than 500 people and leaving over 150,000 homeless.

Last September, the country was hit by an earthquake and tsunami in Palu on Sulawesi island which killed around 2,200 people.