You are here
Home > asia > Back at UN, Trump eyes new North Korea summit ‘quite soon’ 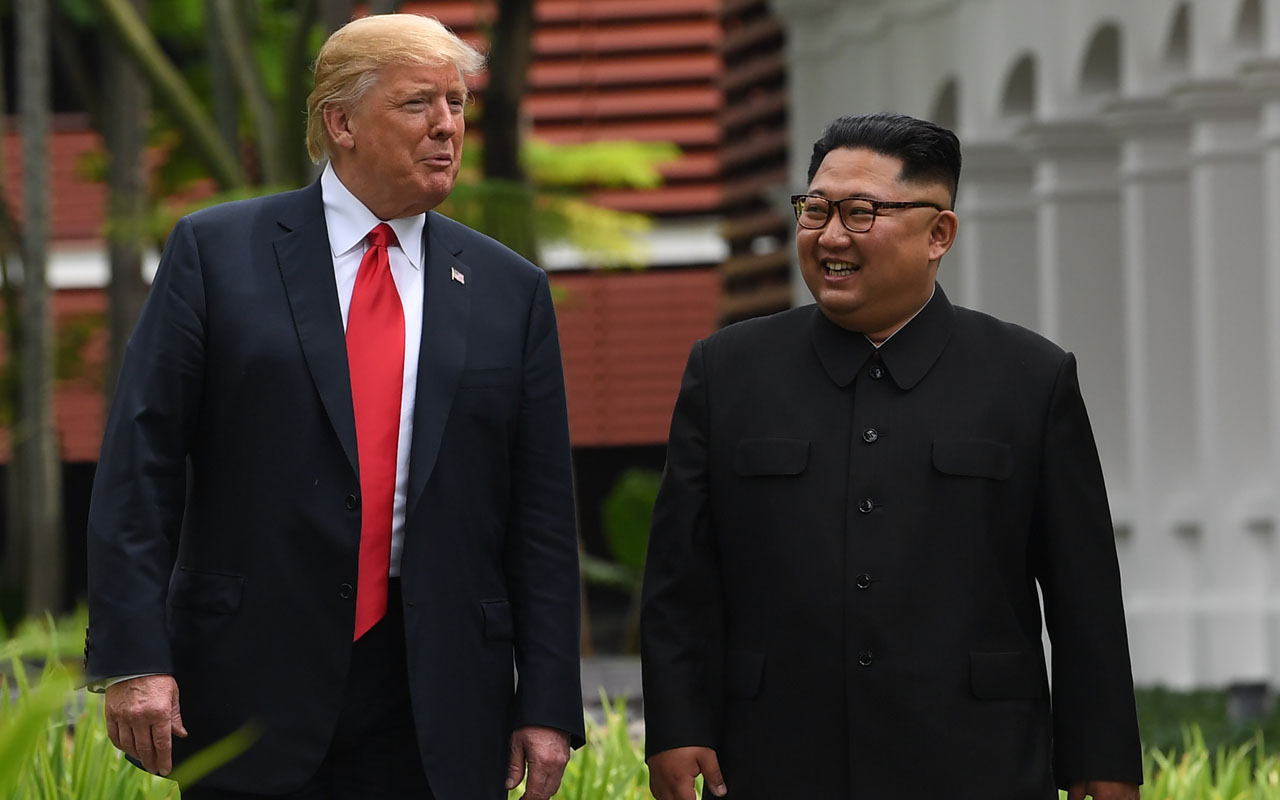 (FILES) In this file photo taken on June 11, 2018 North Korea’s leader Kim Jong Un (R) walks with US President Donald Trump (L) during a break in talks at their historic US-North Korea summit, at the Capella Hotel on Sentosa island in Singapore. President Donald Trump on September 19, 2018 said US relations with North Korea are making “tremendous progress” from the days before his presidency when the two countries appeared close to “going to war.” Trump said a recent letter from North Korean leader Kim Jong Un confirmed the positive track, which he said has seen the hardline communist country promise to halt its nuclear missile test program and mount a combined bid with South Korea for the 2032 Olympic Games. / AFP PHOTO / SAUL LOEB

President Donald Trump said Monday he expects a second summit with Kim Jong Un to take place “quite soon” as he returned to the United Nations to trumpet a turnaround in ties with the North Korean leader.

Trump used his debut address to the UN General Assembly last year to threaten to “totally destroy” North Korea and belittled Kim as “rocket man”, prompting Kim to respond by calling the US president “mentally deranged”.

But speaking as he arrived at UN headquarters in New York for this year’s gathering, Trump hailed “tremendous progress” to halt Pyongyang’s nuclear and ballistic missile tests and said that a year later it was a “much different time.”

“It looks like we’ll have a second summit quite soon,” he told reporters.

“As you know Kim Jong Un wrote a letter — a beautiful letter — asking for a second meeting and we will be doing that,” added Trump who met with Kim in Singapore in June.

While relations with Kim have improved dramatically, leaders attending the annual assembly will hear how another of Trump’s adversaries, Iran’s Hassan Rouhani, remains beyond the pale for the American president.

In addition to his address to the General Assembly on Tuesday, Trump has a series of bilateral meetings with allies such as French President Emmanuel Macron, Britain’s Theresa May and Japan’s Shinzo Abe, whom he met with late Sunday.

One of the most closely-watched will be Monday’s meeting with South Korean counterpart Moon Jae-in, who will brief him on last week’s inter-Korean summit with Kim in Pyongyang.

US Secretary of State Mike Pompeo — who has visited Pyongyang three times — will preside over a Security Council meeting Thursday where he will brief members on how the administration can persuade the North to turn its back on nuclear weapons.

He will also defend the Trump administration’s use of sanctions to force change, which has seen Chinese and Russian companies punished for doing business in North Korea.

Skepticism remains about whether Kim has taken any concrete steps, but that seems unlikely to deter Trump from pushing toward a follow-up to the Singapore summit in June.

Big drug problem
Kicking off his meetings, Trump addressed “the world drug problem and a big problem it is” at an event that saw 130 countries pledge to step up action to fight the illegal drug trade and combat addiction.

In his 41-minute speech at the General Assembly in 2017, the US president made clear he wanted to turn the clock back on the last half-century’s growth of global rules and institutions to return to the primacy of the nation-state.

The UN’s number one financial backer, the United States has moved under Trump to cut funding to the world body, notably to peacekeeping missions that are key to the UN’s goal of promoting peace and security.

“The United Nations has tremendous potential and that potential is being met, slowly but surely,” Trump told the meeting attended by UN chief Antonio Guterres.

While Trump will dial down the rhetoric against Kim, there seems to be little prospect of him doing likewise with Rouhani.

The US annoyed many of its allies in Europe by pulling out of a deal they jointly negotiated in 2015 that lifted sanctions against Tehran in exchange for restrictions on its nuclear program.

US allies in the Middle East, notably Saudi Arabia, have, however, been delighted by Trump’s stance.

On Wednesday, Trump will for the first time chair a Security Council meeting on non-proliferation that will focus heavily on Iran, likely triggering a clash with other big powers.

The White House has not completely closed the door on a Rouhani-Trump meeting, but in a weekend op-ed in The Washington Post, Rouhani charged that Trump’s offer of talks was not “genuine” and came with a list of “openly insulting preconditions.”