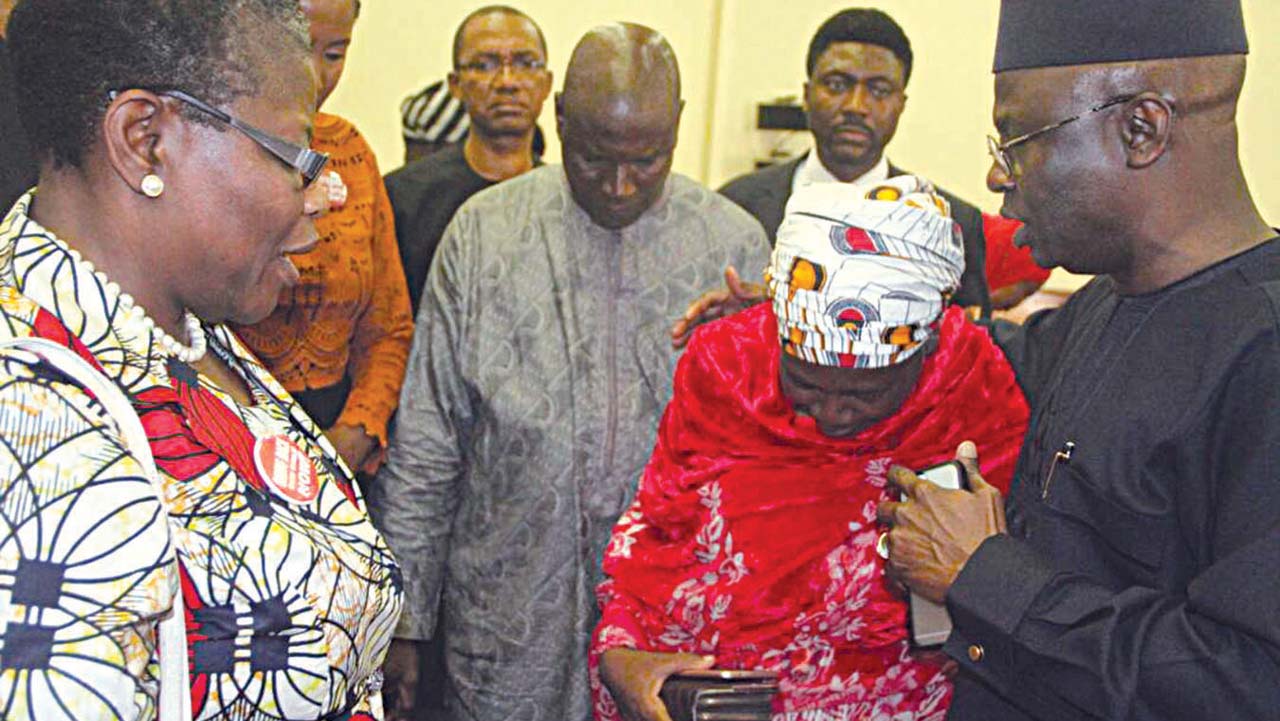 Co-convener, Bring Back Our Girls (BBOG), Obi-Ezekwesili (left); Pastor Tunde Bakare, pray for one of the mothers of the yet to be released Chibok girls, Esther Yakubu, during the Chibok Girls’ Anniversary Lecture in Abuja …yesterday. PHOTO LUCY LADIDI ELUKPO

The message was clear. Rather than scale down agitations, the Federal Government must face unrelenting pressure until the Chibok girls and Dapchi girl Leah Sharibu, are released.

The event was the Second Annual Chibok Girls Lecture held, yesterday, in Abuja, themed, ‘Towards A Just And Good Society: Renewing Our Commitment To The Girl Child In Nigeria’, and designed to coincide with the day, four years ago, when Boko Haram stormed a school in Chibok town, Borno State, abducting hundreds of schoolgirls.

Speaker, Tunde Bakare, activist and former presidential running mate of General Muhammadu Buhari in 2011, indicted the Federal Government for not doing enough to free the girls.

“If any of the Dapchi or Chibok girls were their daughter’s, would they not have done more than they have to ensure their freedom? You can then conclude that we have a government that does not represent our interests as it ought to,” he said, stressing: “If they feel what we feel, they will empathise much more with us and go the extra mile in ensuring that everyone connected to their captivity today is brought to book.”

Referring to both abductions, Bakare wondered how the Federal Government could watch the country ‘beaten twice’ by terrorists and not be ‘shy’. “Whether it is Jonathan’s administration or Buhari’s administration, any government that does not prioritise the security and welfare of the people is already a failed government to start with,” he said.

Former Minister of Education and co-convener of the BringBackOurGirls (BBOG) group, Oby Ezekwesili, blamed the abductions on government’s inability to protect the weak and vulnerable of society, promising to sue the Federal Government if it fails to bring back Leah.

“We heard the assurance that the President gave that Leah Sharibu will be brought back. We are giving a couple of weeks to seeing what that means. If that does not happen, then we will have to take our matter forward, because our lawyers have written that there was criminal negligence and there are questions that needed to be answered. If Leah Sharibu does not come back home, as the government said, then we will have to go to court.”

In a statement signed by Sponsorship Communications Advisor, Oluwakemi Akinremi-Segun, ActionAid said it continues to stand in solidarity with the families, friends and community of the Chibok girls.

Country Director, Ene Obi, commended moves by the Federal Government and the military on the release of the girls, regretting that the Dapchi abduction has further revealed the vulnerability of the Nigerian girl-child in conflict and non-conflict zones. Government must make schools safe and boost girls’ enrolment, retention and protection from all forms of violence, she said.

An investigative journalist, Ahmad Salkida, however, has alleged that only 15 out of the 113 Chibok girls remain alive.

In a series of tweets, yesterday, Salkida, who was declared wanted by the Nigerian Army in 2016 over alleged links with Boko Haram, arrested, and released without charge, said: “My painstaking investigations on the #Chibokschoolgirls revealed that just a handful of the 113 #ChibokGirls are alive. Many of the girls have died as a result of cross fires and bombardments by the security forces that no doubt were intent on rescuing them.

“My investigations also revealed that they (the girls) are no longer under the control of #AbubakarShekau. According to sources, they are now ‘married’ and only their ‘husbands’ can decide their fates.

“If they are divorced or the men are killed, that is when Shekau’s decision takes precedence. And in this instance, since the girls have been indoctrinated, their leader has no right to negotiate their release, no matter the ransom offered, reliable multiple sources said.”

Salkida said: “The fact remains that under the present circumstances, there is no room for peaceful settlement…The way out for these girls is a military rescue or negotiation with individual captors to release their ‘wives’ in return for some kind of deal. But this will mean death to these fighters because the terror group now sees the girls as part of their own and must be protected.”

He also criticised the Federal Government’s handling of the matter, saying: “How come there is little or no information about the girls, and both the parents and campaigners are in the dark? It’s because government resists independent reporting of the crisis. Most of the reports are choreographed and Nigerians are also not ready to hear the truth or stand by it.”

He expressed “heartfelt condolences to the parents of the near 100 (girls) that have perished or have not returned home and are apparently not with their captors,” adding: “You must always remember that your daughters were stronger than the rest of us that couldn’t do more to avert this catastrophe.”