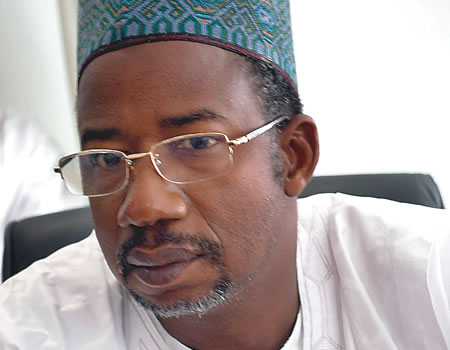 Bauchi State governor-elect, Senator Bala Abdulkadir Muhammad has pledged to run an all-inclusive and participatory government as soon as he takes the oath of office on May 29th 20019.
Bala Muhammad made the pledge at a special Broadcast shortly after he was declared the winner of the Governorship Election in the state in late Monday night, at the end of a keenly contested gubernatorial election with the incumbent Governor, Mohammed Abdullahi Abubakar.
The Governor-elect assures that he will ensure efficient and transparent government, as he would engage all the stakeholders in the state in the running of the act of governance so as to hold his administration accountable.
He further said that in order to find lasting solutions to some of the challenges militating against the progress and development of the state, he would launch pro-business, pro-market agriculture and economic revolution in addition to restoring the glory of all educational institutions owned by the state.

ALSO READ:Bauchi will never bend its back again for an oppressor to ride ― Dogara

According to him, “the incoming government is determined to give citizens of the state a better prospect and greater opportunity by reducing poverty and empowering them in the areas of Agriculture, Education, Urban and Rural Infrastructure among others”.
The governor-elect who challenged the outgoing administration for not fulfilling its electoral promises pledged not to leave the state in the hands of those who lack vision, motivation and the capacity to drive the change required.
Bala Muhammad, therefore, thanked members of his party, the Peoples Democratic Party (PDP), religious and community leaders as well as the media for their support towards his victory, and remarked that he would soon engage with the officials of the outgoing administration for a successful transitional exercise.
It will be recalled that, Senator Bala Muhammad won the gubernatorial election with a total of  515,113 votes to defeat the APC candidate, incumbent Governor, Muhammad Abdullahi Abubakar who polled a total of 500,625 votes while the PRP candidate, Professor Ali Pate polled 46326 votes to emerge a distant third.
The returning officer for the state governorship election was Professor Kyari Muhammad who declared the PDP candidate as the winner for scoring the highest number of votes cast and fulfilling the requirements of the laws.