You are here
Home > Benue > Benue charged ! ‘We’re all ready to die in defence of our place’

Its been free flow of blood in Benue since the beginning of the year. No thanks to suspected herdsmen who in the last four months have continued to bare their fangs on communities in the state, leaving many dead, scores injured and several communities razed.

The pogrom which started on the first day of the year has persisted and the Federal government seemed to have lost every sense of responsibility to have the killings checked or to take decisive action as it did with the IPOB agitators in the south east.

Perhaps what would have led to a major crisis in the country after the January 1 killing of closed to 80 persons was an attempted reprisal by youths of Benue when the remains of those killed in the two local government areas arrived Makurdi town.

It took the intervention of Governor Samuel Ortom, who also escaped being lynched by the angry youths in Makurdi, for the youths to sheath the sword after persistent pleas from the bewildered Governor.

Since then, the killings have continued unabated despite the 45 day military spike operation in the state code named Exercise Cat Race.

The killings eventually spread to Gwer West local government where close to 40 persons were killed by the marauders, prompting the Governor to urge the people of the state to defend themselves against the rampaging herdsmen even with stones and sticks.

The mass murder again sparked angry reactions from Benue youths, who took to the streets to protest the near neglect and insensitivity of the federal government to the ongoing bloodbath in the state.

The angry youths showed greater determinations to take their destiny in their own hands by embarking on reprisals on anyone identified as a northerner within the state or on passing through the popular Wurukum roundabout where every vehicle traveling from the north to the south and eastern parts of the country navigates through.

They made bonfire, chanting war songs, an indication that the youths of the state were prepared to embark on full reprisals to compel the seeming indifferent federal government to wake up to its responsibilities of protecting the lives and property of all Nigerians irrespective of tribe or creed.

The development, this week, forced all schools, banks and business outlets in the state capital to close shop for fear of a full blown crisis that could snowball into major bloodbath of imaginable proportion in the state.

On the said day terror overtook the entire state capital and adjourning communities. Everyone ran for safety, parents besieged schools to take their wards back home especially after the remains of the dead Priests arrived the Bishop Murray Hospital morgue in Makurdi.

It was a war like situation in the town and again the situation was saved by Governor Ortom who was on his annual leave and outside the state but in constant touch with the acting Governor and heads of security agencies in the state.

Speaking to Saturday Vanguard on why youths of Benue may resort to taking up arms if the killings in the state continued, one of the protesting youths, Michael Mbaar said if the federal government would not stop the Benue pogrom, youths of the state might resort to the killing of anyone found to be of Northern extraction resident in the state or transiting through the state. 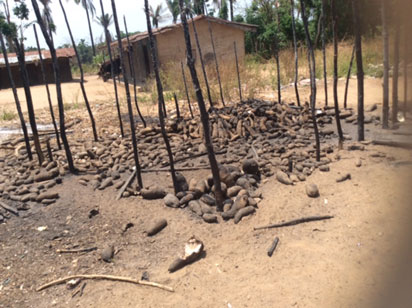 “If the federal government controlled by Fulanis think they can watch while their people kill our children and women we will take the laws into our hand and resort to killing any Northerner we see in Benue even if they are transiting.

“We are sounding this warning because we will no more hesitate to resort to an eye for an eye. And you know what that means, they are gradually leading our beloved Nigeria into another Rwanda.

“God and indeed the entire country know that we have been patient with this government but we can no more sit and watch these heartless herdsmen kill our people including pregnant women and children in cold blood.

“We are now prepared to all die in the course of defending our state, children and wives.

“This conspiracy of silence against Benue must be stopped.”

Regrettably, despite the outcry and condemnation that trailed the killing of two Catholic Priests and 17 worshippers at Mbalon Catholic Church in Gwer East Local government area of the state, herdsmen early Thursday, invaded the Africa Church, Mbamondo Ukemberagya Logo local government area of the state, killing seven persons who were taking refuge in the church after being displaced by the raging herdsmen crisis in the area.

At the moment the entire state is charged with fear written on all faces as everyone is obviously scared of the dimension the latest killing may take in terms of reprisals.

Bothered by the unfolding development Governor Samuel Ortom who hurriedly cut short his annual leave to take full charge of the state, implored the people to be resolute and once again restated his call on the people of the state to defend themselves and their land from the marauders.

The Governor who was also summoned by the Benue state House of Assembly to brief members on actions taking by the State Security Council to halt the incessant killings in the state by Militant herdsmen, in a statement through his Media Adviser. Tahav Agerzua, urged President Muhammadu Buhari to order the arrest of the perpetrators of what he described as an ongoing pogrom in the state as well as leaders of Miyetti Allah Kautal Hore for allegedly sponsoring the ongoing killings in the state.

He vowed that “no amount of killings would make the state review the Open Grazing Prohibition and Ranches Establishment Law because it was the product of the entire people which is the only solution to the incessant farmers and herders crisis.”

Part of the statement read “I am saddened by this unabating carnage. The people of Benue State are accommodating and law-abiding but it seems this gesture has been misconstrued to be cowardice.

“Our people are known for their bravery. We are not cowards. Something must be done to stop this carnage. Enough is enough.”

On his part, the Chancellor of the Makurdi Catholic Dioceses, Rev. Fr. Jude Ortese who announced that the victims of the Mbalon Catholic Church massacre would be accorded mass burial described the attack and killings in the church as a direct war on the church which should be stemmed to check its spill over effect.