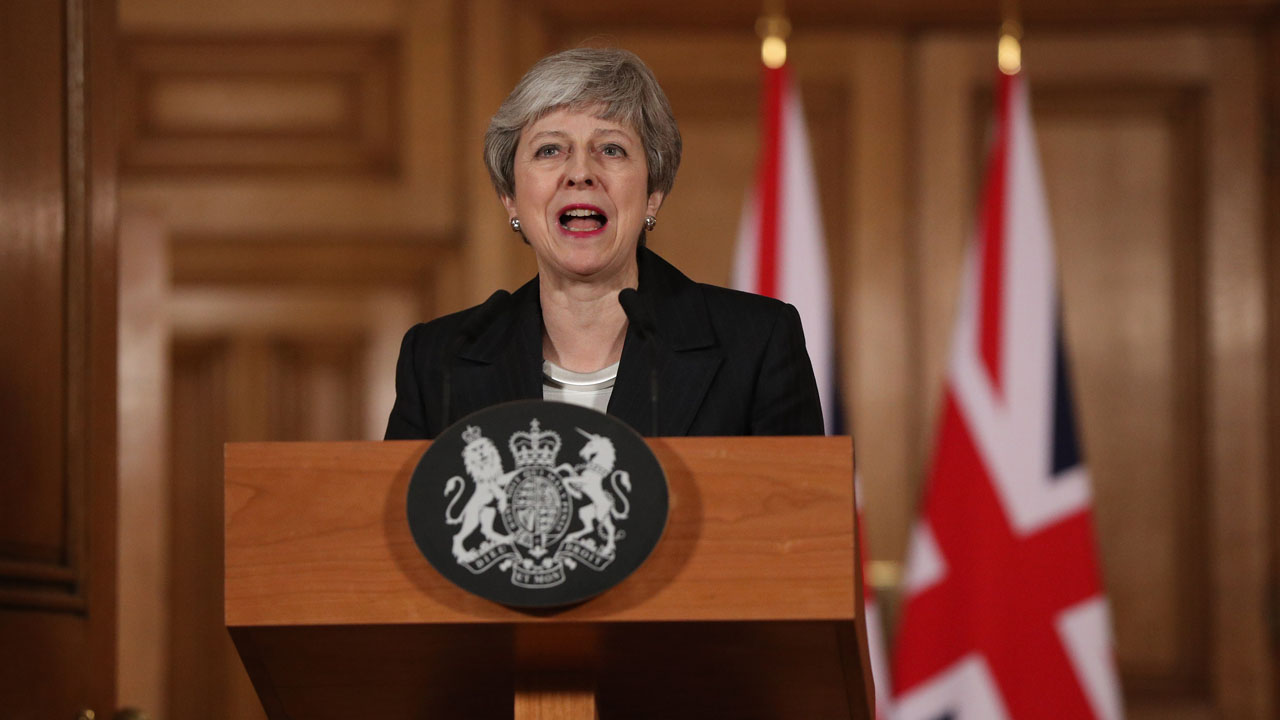 Britain’s Prime Minister Theresa May makes a statement inside 10 Downing Street in London on March 20, 2019, following her request to EU leaders to extend Brexit until June 30. – Prime Minister Theresa May said on Wednesday she remained “determined” to deliver Brexit, hours after formally requesting European Union leaders grant a three-month delay to Britain’s departure from the bloc. (Photo by Jonathan Brady / POOL / AFP)

A dogged but isolated Prime Minister Theresa May was headed back to Brussels on Thursday to beg for more time to deliver her Brexit plan, in defiance of the MPs who twice rejected the withdrawal deal.

May’s fellow European Union leaders, meeting for their spring summit, say they will tell her that Britain can postpone Brexit until May 22, but only if she can win over British lawmakers next week.

If the withdrawal agreement is rejected again, an emergency summit could be called next week to agree a longer extension until at least the end of the year — otherwise Britain’s four-decade-year-old European adventure comes to an abrupt end on March 29.

Time is tight, but there will be no decision on an extension in Brussels on Thursday, and May seemed to have done no favours to her efforts to persuade more MPs to back the withdrawal agreement on the eve of the summit, when she blamed them for the impasse.

“All MPs have been willing to say is what they do not want,” she said, in a televised address that sought to reach over the heads of parliament to the British people and infuriated lawmakers on both sides of the House of Commons.

“I passionately hope MPs will find a way to back the deal I’ve negotiated with the EU, a deal that delivers on the result of the referendum and is the very best deal negotiable,” she said.

The deal could be brought back to parliament as early as Tuesday.

May wrote to EU Council president and summit host Donald Tusk on Wednesday to ask for a three-month delay of Brexit until June 30, but EU diplomats insisted that Britain would either have to leave before the May 23 European election or take part in the vote and stay in the bloc until at least the end of the year.

May, however, has insisted that she will not oversee a long delay, which would increase pressure at home for a general election or for a second Brexit referendum that might reverse the decision to leave.

“You want this stage of the Brexit process to be over and done with this. I agree. I am on your side,” May told voters, blaming the MPs opposed to her Brexit plan and insisting she was requesting a delay until June 30 with “great personal regret”.

– ‘Brexit fatigue’ –
Tusk, meanwhile, admitted that European leaders are suffering “Brexit fatigue”. He said he feared his hopes for an orderly Brexit agreement with a plan in place to prevent economic and political chaos may prove “frail, even illusory.”

Lawmakers have twice resoundingly rejected May’s agreement, and a third vote the premier hoped to hold this week was cancelled by the House of Commons speaker on procedural grounds.

Nevertheless, Tusk was clear that Europe wants May to try again.

“In the light of the consultations I have conducted over the past days, I believe a short extension will be possible but it will be conditional on a positive vote on the withdrawal agreement in the House of Commons,” Tusk told reporters.

May is hoping a third vote could be admitted despite the speaker’s decision, if she can formalise changes made to the agreement with EU leaders last week.

In Berlin, Chancellor Angela Merkel agreed, telling lawmakers that EU leaders would approve some Brexit guarantees offered to May in Strasbourg last week to help reassure British lawmakers and that if the deal passes “we could positively talk about a short delay.”

Diplomats from other EU countries made similar noises, although France struck a tougher note, stressing more clearly that no postponement would be given unless May comes up with a credible strategy to get the withdrawal agreement ratified.

The British parliament has been deadlocked for months over Brexit, with MPs unable to decide how to implement the referendum result, and voters themselves are also sharply divided.

But Britain is now in crisis, facing the potentially catastrophic prospect of leaving its biggest trading partner with no arrangements in place.

May’s team tried to engage senior members of the opposition, hoping to bring enough members on side to pull her deal through. Labour leader Jeremy Corbyn will also be in Brussels on Thursday for talks with EU negotiator Michel Barnier.