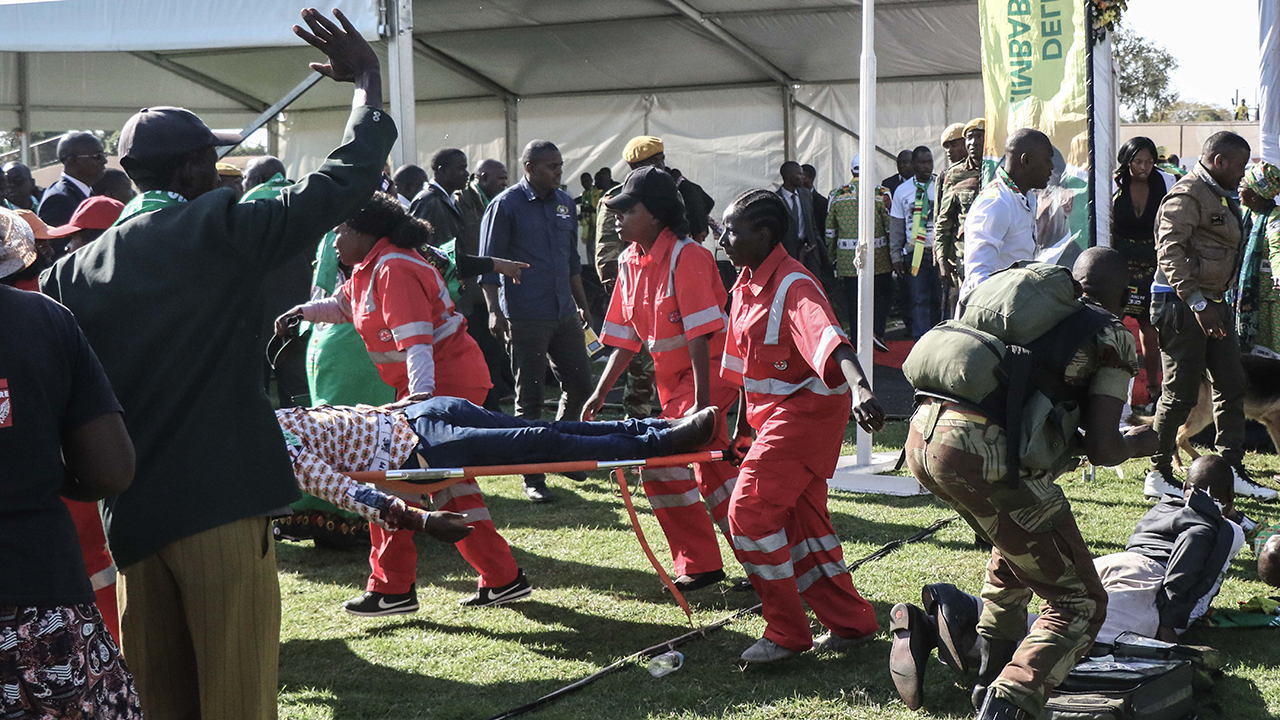 Injured people are evacuated after an explosion at the stadium in Bulawayo where Zimbabwe President just addressed a rally on June 23, 2018.<br />An AFP correspondent reported multiple injuries but could not immediately give a precise toll after a blast at a ruling ZANU-PF party rally today. Images broadcast on Zimbabwean TV showed scenes of chaos and medics fighting to save those wounded by the blast at the White City stadium in the country’s second city Bulawayo. / AFP PHOTO / KEN MAUR / Zimbabwe OUT / DO NOT USE ON TWITTER

Zimbabwe’s President Emmerson Mnangagwa said he survived an attempt on his life after a blast at a party rally Saturday, while one of his vice-presidents and several other party officials were wounded.

A number of other people were also hurt in the explosion during the election campaign event in Zimbabwe’s second city Bulawayo, according to witnesses, but no official toll has yet emerged.

Footage circulating on social media showed an explosion and plumes of smoke around the president as he descended stairs from the podium at the White City stadium.

Mnangagwa suggested he was the target of the attack, which he said also injured Vice-President Kemo Mohadi.

“I am used to these attempts,” Mnangagwa said in his first comments on the explosion.

ZANU-PF chairwoman and cabinet minister Oppah Muchinguri-Kashiri and the wife of the other vice-president, retired General Constantino Chiwenga, Mary Chiwenga were injured, he said, as was deputy parliament speaker Mabel Chinomona.

Mnangagwa told state media that an object “exploded a few inches away from me — but it is not my time”.

The “blast… has affected my vice-presidents — especially comrade Mohadi,” he added.

ZBC described the blast as “an assassination attempt”.

But Mnangagwa insisted that the “country is peaceful” as Zimbabwe prepares to stage its first ever elections not to feature former president Robert Mugabe on July 30.

“Several people were affected by the blast, and I have already been to visit them in the hospital,” Mnangagwa wrote on his verified Facebook account describing the attack as a “senseless act of violence”.

“The campaign so far has been conducted in a free and peaceful environment, and we will not allow this cowardly act to get in our way as we move towards elections.”

Injured ZANU-PF supporters were pictured in a nearby hospital where one man wearing a blood-stained party T-shirt waited for treatment.

According to Mnangagwa’s spokesman George Charamba, the president was “evacuated successfully” to his official residence in Bulawayo.

– ‘People started running’ –
Mnangagwa had been in the city to campaign for votes ahead of nationwide elections due on July 30.

“People started running in all directions and then immediately the president’s motorcade left at a very high speed.

Suddenly soldiers and other security details were all over the place,” said an AFP correspondent at the scene.

Bulawayo has long been a bastion of opposition to the ZANU-PF and it was Mnangagwa’s first rally in the city.

The polls in five weeks will be the first since Zimbabwe’s veteran leader Robert Mugabe resigned following a brief military takeover in November last year after 37 years in power.

The intervention by the army was led by Chiwenga who was then head of the armed forces.

The vote will be a key test for Mnangagwa, 75, who succeeded the 94-year-old autocrat and remains untested at the ballot box.

He has pledged to hold free and fair elections as he seeks to mend international relations and have sanctions against Zimbabwe dropped.

Previous elections in Zimbabwe have been marred by electoral fraud, intimidation and violence, including the killing of scores of opposition supporters in 2008.

Mnangagwa has been accused of involvement in the Gukurahundi massacres of the 1980s that claimed the lives of around 20,000 regime opponents in the country’s southwest where Bulawayo is situated.

Twenty-three candidates –- the highest number in the country’s history — will contest the presidential race.

The main competition will be between Mnangagwa and the main opposition Movement for Democratic Change’s leader, 40-year-old Nelson Chamisa.