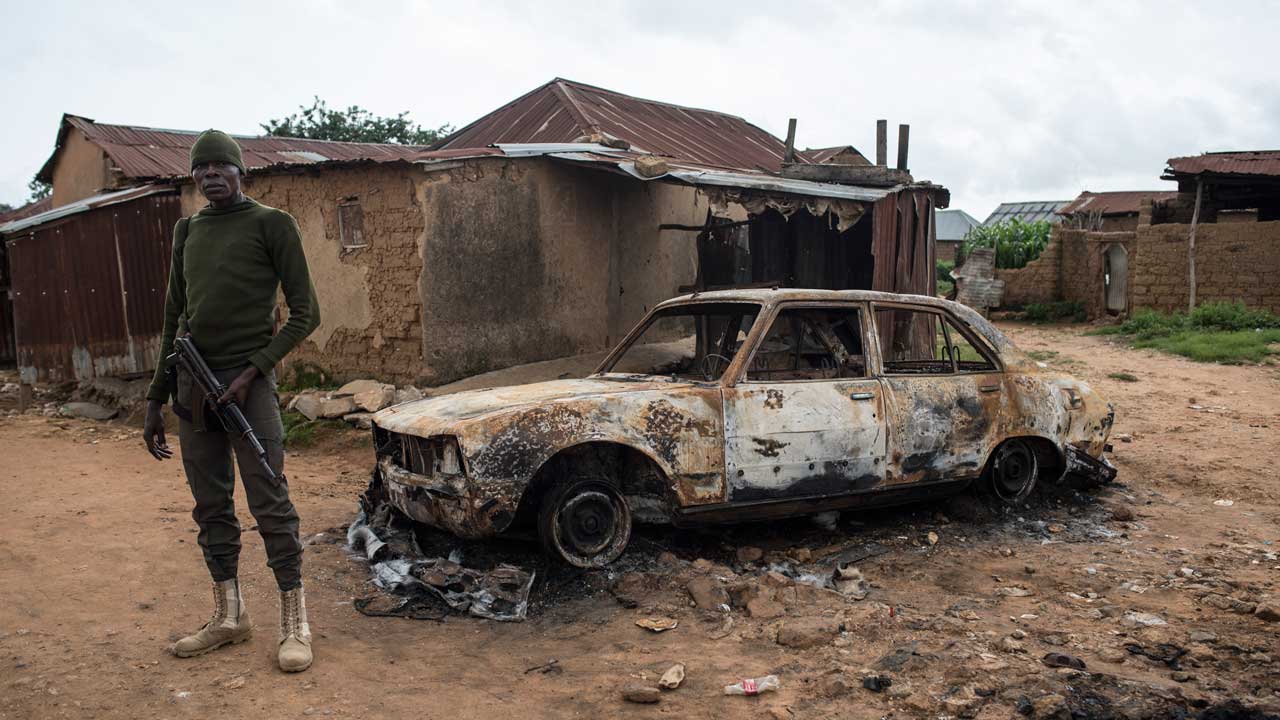 [file] A member of the security forces stands next to a burnt out vehicle in the Nghar Village, near Jos on June 27, 2018, after Fulani herdsmen attacked the village. Plateau State in Nigeria has seen days of violence where more than 200 people have been killed in clashes between Berom farmers and Fulani herders, Nigeria is facing an escalation in clashes between farmers and Fulani herders over land use and resources that is deepening along religious and ethnic lines. STEFAN HEUNIS / AFP

The Buhari Media Organisation (BMO) has accused Amnesty International (AI) of carrying out a hatchet job for the opposition in the run up to the 2019 general elections.

The group made this known in a statement jointly sihgned by the its Chairman, Niyi Akinsiju and Secretary Cassidy Madueke on Momday in Abuja.

It said the report titled ‘Harvest of Deaths’ which focused on Herders-Farmers clash in the last three years, was tilted to make it look like the administration of President Muhammadu Buhari did little or nothing to stem the tide of violence.

“Could it have to do with the fact that the Presidential candidate of the Peoples Democratic Party (PDP) is also a member of the same Fulani ethnic stock like the President?

“But it is mischievous to create the impression that the conflict is either a three-year old conflict or that it was worse in the last three years,” BMO said.

It also questioned the real intention of Amnesty International in releasing its report barely two months to the election.

“If the rights’ watchdog meant well for Nigeria, it should have released the report at a time some Nigerians felt that it was a one-way attack by Fulani herdsmen on innocent farming communities because of the ethnic identity of President Buhari.

“This would have served to correct that impression, but not at a time of relative peace in virtually all the states listed in the report.

“Could it be that Amnesty is bent on stoking the dying embers of the conflict in those states?

“Or why has a group that is meant to be interested in peaceful co-existence not opted to focus on what the government had done right to manage the century-long conflicts between farmers and herdsmen,” it said.

It added that the report was on the one hand a continuation of Amnesty International’s gripe against Nigeria in recent times.

It said on the other hand the report was an affirmation of what its management has always said in spite of information to the contrary.

“The report is a product of a pre-conceived notion which AI just used witnesses to back up.

“For instance AI’s country Director Osai Ojigho had in a February 2018 interview in ‘The Cable’ claimed that ‘despite the fact that this has been going on for a long time, can we point out one or two cases where people have been arrested, prosecuted and fully went through the course of the law to ensure justice’.

“If it operated with an unbiased mindset, Amensty would have known that a 15-year-old Fulani herdsman, Haruna Usman was sentenced to death for killing a farmer in Kogi in 2017.

“Just as another court in Adamawa handed down the death sentence to five young men for killing a herdsmen also in 2017.

“All these happened before Ms Ojigho’s interview where she was emphatic that there had been no arrests and prosecution of people on both sides of the conflict,” it said

The group noted that the report gave chilling accounts of how people including two catholic priests were killed in Benue state.

“More surprising is that the AI report conveniently left out the fact that security forces arrested and are prosecuting six suspects including the commander of the state Livestock Guard, Tahaku Aliyu in connection with the April 24 killing.

The group said the Police made the arrests within a few weeks after April 24 killing and as at May 31, the suspects were facing trial.

It added that Amnesty International conveniently omitted it from a report which concluded that security agencies and the government are not doing enough to prosecute suspects.

“In addition, the Police have recovered 9,657 illegal firearms and ammunition from suspected militias, armed herdsmen and farmers in a nationwide mop-up exercise.

“The Army, on its part, launched full scale military operations in Taraba, Benue, Nasarawa, Kogi, Kaduna and Niger states which led to the death of scores of militant herdsmen and several arrests,” it said.

The Pro-Buhari group urged Nigerians to view the latest report with suspicion.

It added that government was not only taking steps to mop up illegal weapons, but was also putting in place confidence-building mechanisms that have significantly reduced tension in the affected states.