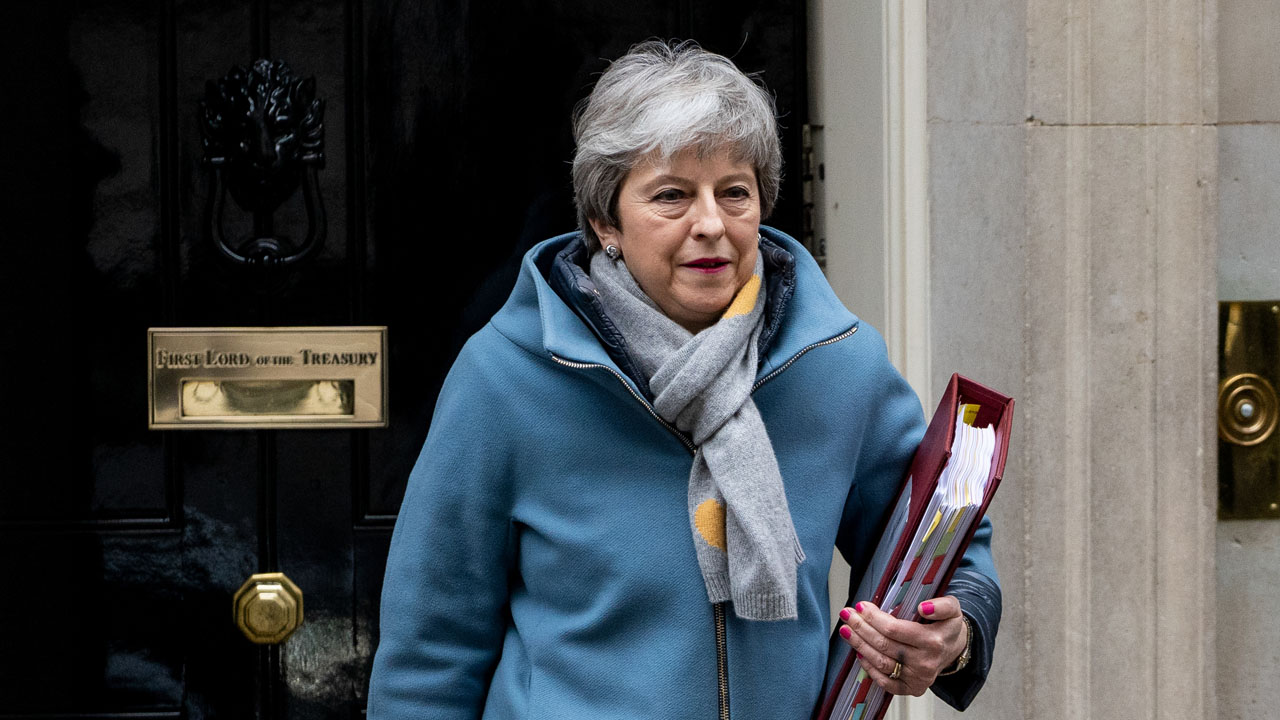 Britain’s Prime Minister Theresa May leaves 10 Downing Street in London on March 20, 2019 ahead of the weekly Prime Minister’s Questions (PMQs) question and answer session in the House of Commons. – Britain will write to the EU to seek a short delay to Brexit, but Brussels has warned any decision may only come next week — just before the scheduled departure date. Exactly a thousand days on from the seismic 2016 referendum decision to leave the European Union, a divorce deal negotiated by May is blocked in parliament and political turmoil grips the country. (Photo by Niklas HALLE’N / AFP)

Britain will write to the EU on Wednesday to seek a short delay to Brexit, but Brussels has warned any decision may only come next week — just before the scheduled departure date.

Exactly a thousand days on from the seismic 2016 referendum decision to leave the European Union, a divorce deal negotiated by May is blocked in parliament and political turmoil grips the country.

Prime Minister Theresa May’s letter to EU President Donald Tusk will ask to push Brexit back in a bid to avoid the economic shock of a chaotic departure in just nine days time.

Exasperated by the deadlock in parliament over the terms of Britain’s divorce from the EU, May will send the letter before heading to a fraught Brussels summit on Thursday.

However, European Commission President Jean-Claude Juncker said it was unlikely that the EU would reach any decision on the demand at the two-day gathering, without a clear signal from London on how British MPs wish to proceed.

A Downing Street source set out why May would not be seeking a lengthy delay to Brexit.

“PM won’t be asking for a long extension,” the source told AFP.

“There is a case for giving parliament a bit more time to agree a way forward, but the people of this country have been waiting nearly three years now.

“They are fed up with parliament’s failure to take a decision and the PM shares their frustration,” the source said.

‘End of the road’
May and the EU hammered out a divorce agreement over the past two years but MPs have twice rejected the plan by heavy margins.

She had hoped to hold a third vote this week but was dramatically blocked by the speaker of the House of Commons, who said May could not keep bringing her deal back to MPs without changes.

She will face questions from MPs in parliament on Wednesday.

European leaders are now demanding Britain tells them clearly what it wants.

Juncker said another gathering in Brussels may be necessary next week to reach any decision on Brexit.

Pointing to the chaos in London, Juncker said the remaining 27 members states’ hands were tied until that was resolved.

“As long as we don’t know what Britain could say yes to, no decision can be taken on our side either,” he told German broadcaster Deutschlandfunk.

Juncker insisted that the divorce deal was the remaining members states’ final offer.

“Nothing more can be done, we’ve reached the end of the road,” he said.

“If other scenarios are being discussed, we’d need a new road.”

Juncker said May needed to present Brussels with an agreement approved by parliament as well as “a clear timetable”.

Given that this was unlikely before the summit’s start on Thursday, “we will probably need to meet again next week”.

‘National humiliation’
European Parliament vice-president Mairead McGuinness said she expected the EU will be willing to grant a Brexit extension if the purpose is clear.

However, she told BBC television there were concerns over continued uncertainty from a “rolling cliff-edge”.

The Sun said: “Almost three years on from our historic Brexit vote, we are close to global humiliation. The EU holds nearly all the cards.

“We are staring down the barrel.”

The Daily Mail’s editorial read: “1,000 days of incompetence, betrayal and now national humiliation… how did victory turn to this?”

Despite the turmoil, the pound continues to hold its own against the dollar.

“For now, the pound appears to be reflecting the optimism of the market that common sense will prevail,” said Michael Hewson, chief market analyst at CMC Markets UK.