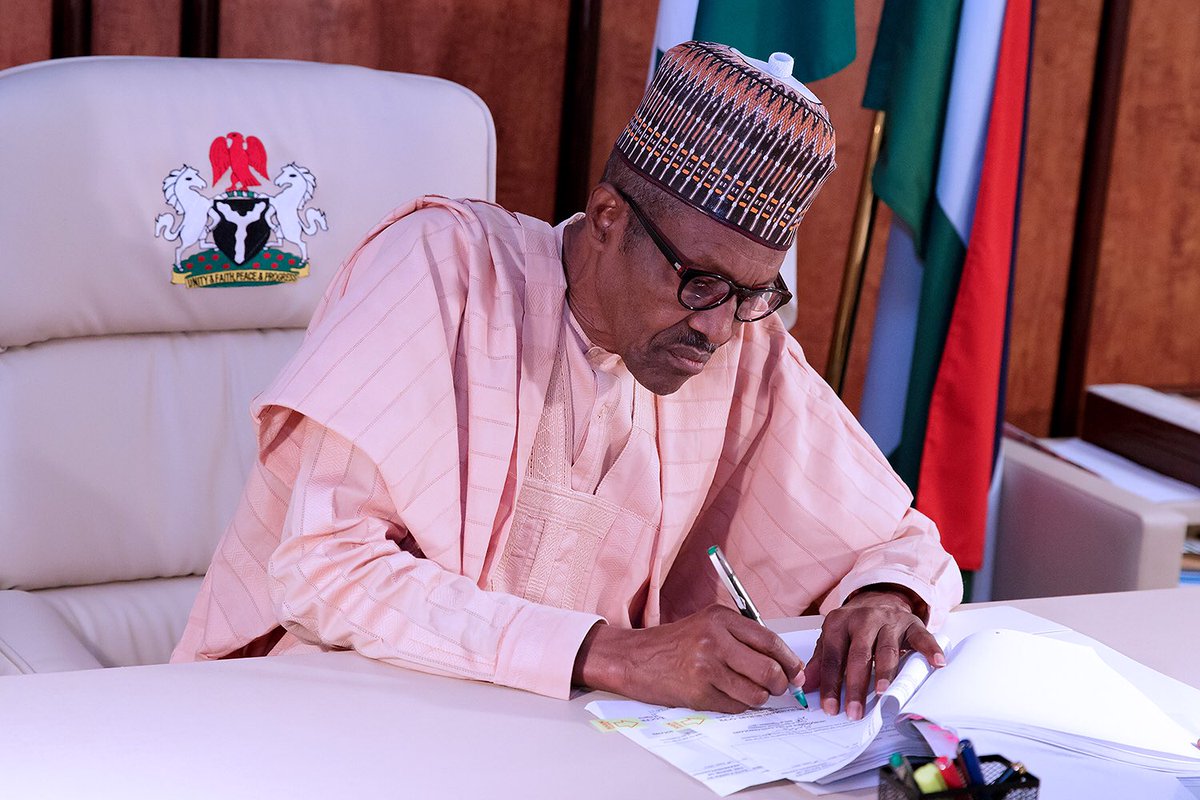 • Unfolds Nigeria’s stance on global matters
President Muhammadu Buhari yesterday reinterated his position that terrorism and insurgency in the Sahel region and Lake Chad Basin are fuelled by local runaway fighters from Iraq and Syria and arms from the disintegration of Libya.

Buhari spoke in New York where he unfolded Nigeria’s positions on international matters before the global audience during the opening of the General Debate of the 73rd Session of the United Nation’s General Assembly (UNGA73).Presenting Nigeria’s national statement, the president first paid glowing tributes to the late seventh UN Secretary-General, Kofi Annan, for his invaluable contributions to global peace.

“We in Africa, while mourning the loss of this great son of ours and citizen of the world, take pride in the way he served humanity in a truly exemplary manner. He demonstrated, in his calm but determined manner, the virtues of compassion, dedication to the cause of justice, fairness and human rights. He was a visionary leader who inspired hope even in the face of the most daunting challenges. He devoted his entire life’s career to the UN and the pursuit of its ideals and goals. The world is indeed a better place, thanks to his exemplary service,” he said.

Buhari noted that in the past year, the world saw some positive results and encouraging signs from the bilateral and multilateral efforts of the international community to address conflicts, crises and threats to world peace. He commended “the efforts of the leaders of the United States, North Korea and South Korea, to realise our shared goal of a nuclear free Korean Peninsula.”He also acknowledged the commitment to peace shown by President Donald Trump and Chairman Kim Jong-Un by initiating a historic summit, urging both leaders to “continue this positive engagement.”

The president expressed regret about some lingering threats to peace and security around the world, lamenting that in some cases, matters got worse. “The continuing plight of the Rohingyas in Myanmar, the protracted Israeli/Palestinian conflict, the wars in Yemen, and Syria, and the fight against international and local terrorism such as Boko Haram and Al-Shabaab come to mind.”

President Buhari, in a statement signed by his Special Adviser on Media and Publicity, Femi Adesina, said: “The terrorist insurgencies we face, particularly in the Sahel and the Lake Chad Basin, are partly fuelled by local factors and dynamics, but now increasingly by the international Jihadi Movement, runaway fighters from Iraq and Syria and arms from the disintegration of Libya.

“In Myanmar, the carnage appears to have thankfully abated somewhat. We commend the United Nations for staying focused on the situation of the Rohingya people, to bring their suffering to an end, and hold to account the perpetrators of the atrocious crimes committed against innocent and vulnerable members of this community, including women, children and the old.”

He called on the international community to strengthen its resolve to combat ethnic and religious cleansing everywhere. The president expressed Nigeria’s support for the UN’s efforts in ensuring that the Rohingya refugees are allowed to return to their homes in Myanmar with security, protection, and guarantee of citizenship.

Drawing the attention of the international community to the “carnage and the worsening humanitarian situations in Syria and Yemen,” the Nigerian leader cautioned that “the international community cannot afford to give up on the Syrian and Yemeni people. We must pursue all efforts to find peaceful political solutions to these wars which cannot be won by force of arms alone. Regarding Syria, we hope that the UN-sponsored Geneva process and the Sochi initiative, led by Russia, Iran, and Turkey advance this objective.”

He added that, “The International community must keep up the pressure to encourage the parties to pursue the path of dialogue, negotiations and inclusiveness in resolving their sectarian divides and bringing to an end the immense human suffering in Syria as well as Yemen. We commend Turkey, Jordan, Greece, Germany, Italy and France for hosting the millions of the refugees fleeing these brutal conflicts.”

On the worsening Middle East conflict, President Buhari called “on the Israelis and the Palestinians to make the necessary compromises in the interest of justice, peace and security, in line with our numerous UN resolutions and applicable international laws.”Observing that, “unilateral, arbitrary and insensitive actions only prolong the conflict and undermine world peace and security,” he attributed the deteriorating humanitarian situation in Gaza to the “appalling result of unrestrained use of power.”

Nigeria, the president said, urged “both parties to re-engage in dialogue on the basis of relevant UN resolutions, the Madrid Principles, the Quartet Roadmap and the Arab Peace Initiative, among others.”He also reaffirmed Nigeria’s “unwavering support for a just two-state solution, negotiated without intimidation and with Israel and Palestine existing side-by-side in peace and security.”

Citing the current peace between Ethiopia and Eritrea, and the commitment towards peace between Djibouti and Somalia, President Buhari declared:”I believe that with hard work, commitment, and a disposition to compromise and necessary sacrifices, peace is achievable in the Middle East as well.”

On irregular migration which he admitted “entails huge avoidable loss of human lives, puts strains on services in host countries and communities, and fuels anti-immigrant and racist sentiments in Europe,” the Nigerian President welcomed the successful conclusion of the negotiations on the first-ever Global Compact for Safe, Orderly and Regular Migration, and looked forward to its adoption in Marrakech later this year.”He said the “aim is to protect the rights of migrants worldwide, while addressing the concerns of countries of ‘origin’, ‘transit’, or ‘destination’ alike.”

Commending countries such as Germany, Italy and France for treating migrants with compassion and humanity, the president noted that, “irregular migration is not a consequence of conflicts alone, but of the effects of climate change and lack of opportunities at home. Climate Change remains one of the greatest challenges of our time. Very close to us at home, it is our lot in Nigeria, together with our neighbours around the Chad Basin, to live with the climate change consequences of a drastically shrunk Lake Chad and the parching up of otherwise fertile arable lands.”

Painting a distressing picture of The Lake, which was a major source of livelihood to more than 45 million inhabitants of the region, the president said the shrinking meant loss of livelihoods as they are now rendered poor and vulnerable to the activities of extremists and terrorist groups.