You are here
Home > HEADLINES > Buhari returns from London vacation

President Muhammadu Buhari has returned from his vacation in London, UK.

Buhari on Saturday arrived at the Nnamdi Azikiwe International Airport in Abuja after his 10 working days holiday.

President @MBuhari returns to Abuja from the UK, after a 10 working day vacation. pic.twitter.com/m3t7BdRDfD

The president left Nigeria on August 3, after transmitting a letter of notification to the leadership of the national assembly.

He handed over power to Vice-President Yemi Osinbajo to serve as acting president in his absence. 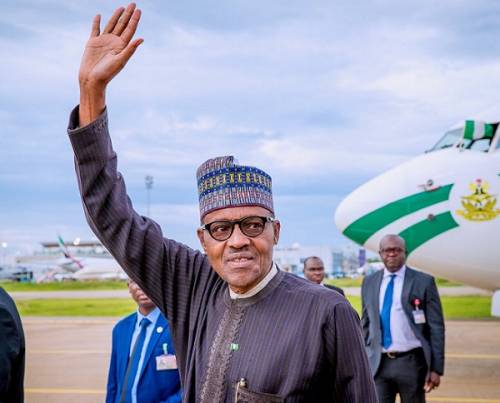 WHILE BUHARI WAS AWAY:

Operatives of the Department of State Services (DSS) barricaded the entrance of the national assembly complex in an operation that lasted hours.

Matthew Seiyefa took over as acting director-general of the DSS after Lawal Daura was sacked following the siege.

The All Progressives Congress (APC) mounted pressure on Senate President Bukola Saraki to step down after he left the ruling party for the Peoples Democratic Party (PDP).

Federal lawmakers met with the Independent National Electoral Commission (INEC) to consider the commission’s budget for the 2019 polls.

The APC secured three more seats at the senate after its members soared to victory in the Bauchi south, Katsina north and Lokoja/Kogi senatorial bye-elections.