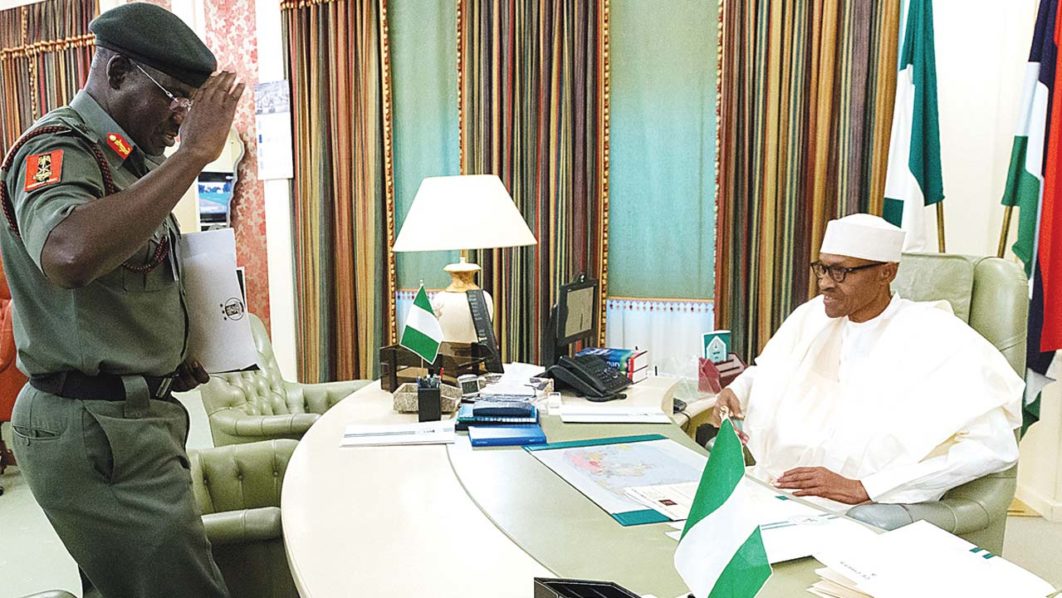 Chief of Army Staff, Lt. General Tukur Buratai (left) and President Muhammadu Buhari as the COAS arrived to brief the president on security matters at the State House, Abuja…

Boko Haram, since 2012 have carried out series of attacks on Nigerian communities, displacing, abducting and killing scores of the Nigeria citizens. The insurgency group has killed over 20,000 people and has left an estimated 2.4 million people displaced.

“We have achieved great successes over the BHTs (Boko Haram terrorists). Thus, absolute and conclusive victory is just inches away. Let us therefore not relent in our gallant efforts and draw back the hands of the clock,” Buratai said in a statement.

“The NA (Nigerian Army) is not known for cowardly behaviour. We have contained several incursions and several security challenges bedevilling our dear country within the last 3 years and now would not be an exception.”

He, however, warned soldiers of the Nigerian Army against surrendering to the cause of fighting insecurity and insurgency that has faced the country, saying such is punishable by death.

“Consequently, any soldier that turns away in the face of enemy incursion would be appropriately sanctioned and made to face Field Court Martial in accordance with our extant laws. As you are all aware; the consequences could be grave.”

Buratai, who assured the troops of President Muhammadu Buhari’s support, urged them “not be complacent by being contented with repelling their attacks, instead, go after them, capture them, and when absolutely necessary, be decisive with the daring ones.”

“Some women and children have been held captive, you are therefore to ensure that adequate rules of engagement are employed to extricate them before any offensive action.”

The Chief of Army Staff assured the troops of adequate welfare packages and equipment to aid their fight the insurgency group in the country.

“I have directed that your allowances are paid regularly as and when due. Your kitting has also been improved drastically. A special uniform allowance was paid a month ago directly into your individual accounts.”

He thanked Nigerians for their prayers and support and reiterated the army is committed to safeguarding the country for its citizens.

The Nigeria Army have continued their fight against the insurgents in the North-east of the country, although the terrorists have carried out targeted attacks in their push back to regain strategic areas where the military was based.