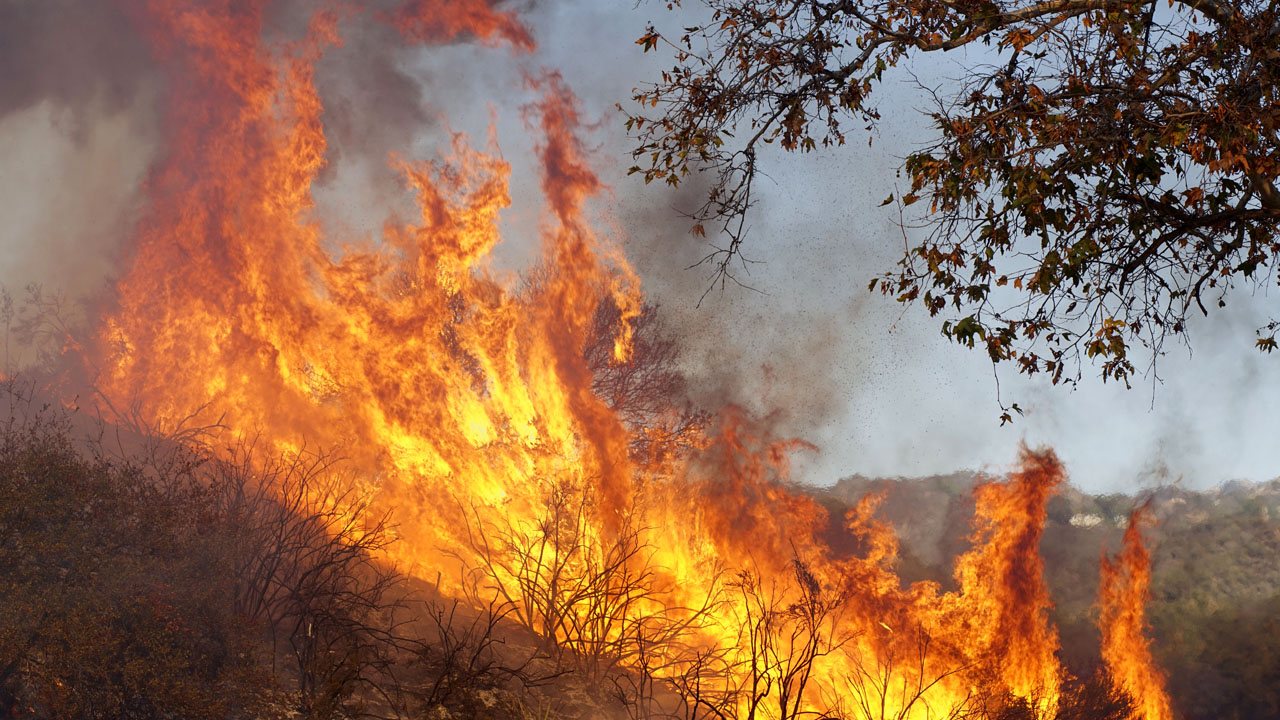 MALIBU, CA – NOVEMBER 11: A wildfire burns at the Salvation Army Camp on November 10, 2018 in Malibu, California. The Woolsey fire has burned over 70,000 acres and has reached the Pacific Coast at Malibu as it continues grow. Sandy Huffaker/Getty Images/AFP

The number of dead in a wildfire raging in California has reached 29, matching the deadliest in the state’s history as recovery teams found six more bodies in the grim search through the wreckage.

The “Camp Fire” — in the foothills of the Sierra Nevada mountains north of Sacramento — is the largest and most destructive of several infernos that have sent 250,000 people fleeing their homes across the tinder-dry state, razing 6,400 homes in the town of Paradise and effectively wiping it off the map.

“Today, an additional six human remains were recovered, which brings our current total to 29,” Sheriff Kory Honea told a news conference Sunday at the end of the fourth day in the struggle to contain the blaze, adding that all were found in Paradise.

At least 31 people have died in fire zones in the north and south California, where acrid smoke blanketed the sky for miles, the sun barely visible.

On the ground, cars caught in the flames were reduced to scorched metal skeletons, while homes were left as smouldering piles of debris, with an occasional brick wall or chimney remaining.

Scores of people remain unaccounted for, and several fire-affected areas have been left without cell phone service.

The Camp Fire has the grisly distinction of matching the 1933 Griffith Park disaster in Los Angeles — until now the single deadliest wildfire on record, according to the California Department of Forestry and Fire Protection (Cal Fire).

At the southern end of the state, where the “Woolsey Fire” is threatening mansions and mobile homes alike in the coastal celebrity redoubt of Malibu, the death toll has been limited to two victims found in a vehicle on a private driveway.

‘The new abnormal ‘
Fanned by strong winds, the “Camp Fire” has scorched 111,000 acres (45000 hectares) and is 25 percent contained, Cal Fire said. So far, three of the more than 4,000 firefighters deployed have been injured.

They estimate they will need three weeks to fully contain the blaze.

Evacuation orders have been issued to more than a quarter of a million people across California, with authorities urging residents not to ignore warnings to flee.

“This is not the new normal, this is the new abnormal. And this new abnormal will continue, certainly in the next 10 to 15 to 20 years,” California Governor Jerry Brown told a news conference on Sunday.

“Unfortunately, the best science is telling us that the dryness, warmth, drought, all those things, they’re going to intensify.”

‘Dangerously wrong’
Almost 6,000 miles away, President Donald Trump, in France for World War I commemorations on Sunday, drew fierce criticism for an unsympathetic reaction to the devastation.

“There is no reason for these massive, deadly and costly forest fires in California except that forest management is so poor,” Trump tweeted, threatening to withdraw federal support.

Brian Rice, the head of the California Professional Firefighters, slammed the tweet as “ill-informed, ill-timed and demeaning to those who are suffering as well as the men and women on the front lines.”

He said the president’s claim that forest policies were mismanaged “is dangerously wrong.”

Shell-shocked
In southern California, the “Woolsey Fire” engulfed parts of Thousand Oaks, where the community is still shell-shocked after a Marine Corps veteran shot dead 12 people in a country music bar on Wednesday.

It has consumed around 85,500 acres, destroyed at least 177 buildings and was 15 percent contained, Cal Fire said late Sunday.

Singer Miley Cyrus’s home was one of the destroyed southern California buildings.

“Completely devastated (sic) by the fires affecting my community. I am one of the lucky ones. My animals and LOVE OF MY LIFE made it out safely & that’s all that matters right now,” she tweeted.

“My house no longer stands but the memories shared with family & friends stand strong.”

Many of the wealthy area’s residents own horses, and for the past days, Twitter has been filled with messages of people seeking and offering help.

Actor James Wood, a rare political conservative in liberal Hollywood, has made new friends by using his Twitter account to help find missing people and getting help for pets, including horses.

“Please think about fostering #pets while evacuees are dealing with the crisis. Los Angeles #animal shelters are mostly filled, so follow my hashtags, and see if someone in need is someone you can help!” read one of his tweets.

The Ventura County Humane Society said it was “deeply humbled by a $100,000 donation from Sandra Bullock and family” to rescue and care for animals evacuated from the fires.