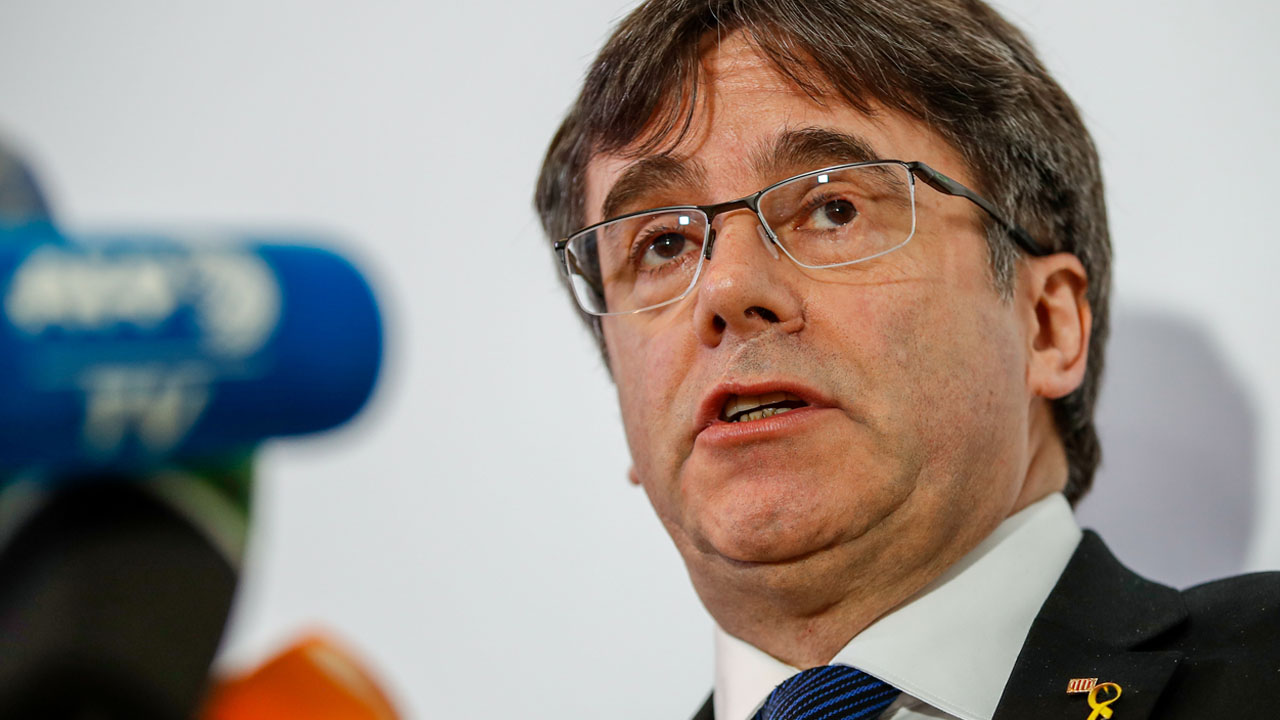 Former Catalan president Carles Puigdemont holds a press conference on February 12, 2019 in Berlin, on the day of the beginning of the trial in Madrid of twelve Catalan separatist leaders involved in an attempt to break from Spain. (Photo by Odd ANDERSEN / AFP)

Twelve Catalan separatist leaders involved in an attempt to break from Spain went on trial on Tuesday under intense scrutiny, as tensions over the future of the region flare again.

The defendants, some of whom have been in pre-trial custody for over a year, sat on benches in the ornate room of Madrid’s Supreme Court, facing seven judges and a discreet Spanish flag in proceedings broadcast live on television.

All are on trial over an independence referendum that was held on October 1, 2017 despite a court ban, as well as a short-lived declaration of independence, which sparked Spain’s worst political crisis since the death of dictator Francisco Franco.

Separatist officials demonstrated near the courthouse, where more than 600 journalists are accredited.

“We’re at the Supreme Court to accuse the Spanish state of violating the civil and political rights of all Catalans,” the region’s separatist president Quim Torra tweeted after holding a banner that read: “Deciding is not an offence”.

Separatists in Catalonia want to be able to hold a referendum on their future and have dismissed the trial as a politically-motivated “farce”.

Pro-independence protesters in the region briefly blocked several roads before dawn, setting fire to tyres and holding up traffic.

Protests have been called in Barcelona, the Catalan capital, at 7 pm (1800 GMT).

But many Spaniards support the proceedings, still dumbstruck over the actions of Catalonia’s then regional executive in October 2017 when it tried to break from the country.

Banned referendum
Carles Puigdemont, Catalonia’s former president who fled to Belgium days after a short-lived declaration of independence on October 27, is not among the 12 defendants.

Spain does not try suspects in absentia for major offences.

The trial’s main protagonist is therefore his former deputy Oriol Junqueras, who opted to remain in Spain. He faces up to 25 years in jail.

The 11 other accused include members of Catalonia’s then executive, the two leaders of powerful pro-independence associations, ANC and Omnium Cultural, and the former president of the Catalan parliament. They face jail terms of seven to 17 years.

Nine defendants have been charged with rebellion, with some also accused of misuse of public funds. They have all been in pre-trial detention for months, some of them for more than a year.

The three others are accused of disobedience and misuse of public funds.

Controversy over rebellion
Controversy has swirled over the charge of rebellion levelled at Junqueras and eight others.

Under Spanish law, rebellion is defined as “rising up in a violent and public manner”.

But the key, divisive question is whether there actually was any violence.

Public prosecutors argue the defendants “called on citizens to participate in the October 1 referendum knowing it was illegal and that explosions of violence could therefore take place”.

But supporters of independence deny the accusation of violence.

They instead denounce police violence during the referendum, images of which were seen in media round the world.

Hundreds of witnesses have been called to testify, including former conservative prime minister Mariano Rajoy who was in office at the time of the referendum.

The first day of the trial, though, is expected to focus on procedural issues.

Due to last three months, the verdicts will be delivered several months later.

Tens of thousands of people joined a rally on Sunday in central Madrid called by right-wing and far-right parties against Prime Minister Pedro Sanchez, who they accuse of “high treason” over his negotiations with Catalan separatists.

Sanchez, who came to power in June with the support of Catalan nationalist parties, had tried to defuse tensions by resuming talks which were called off under Rajoy.

But Catalan separatists insisted on their demand to hold a referendum, which Madrid fiercely opposes, and the talks broke down on Friday.

Sanchez’s minority government relies on the support of Catalan separatist parties to approve its 2019 budget.

But the separatists have vowed to block the budget during a crucial vote in parliament on Wednesday, opening the door for Sanchez to call an early general election.