You are here
Home > HEADLINES > Celebrating tradition with modernity 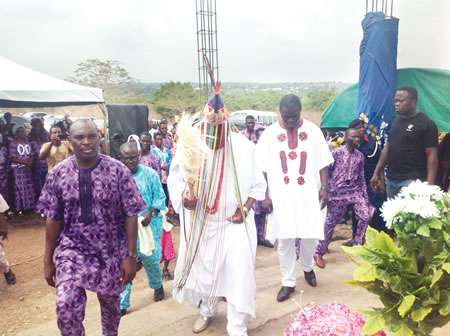 For the first part of the 2019 Odun Oba Onpetu Festival, the people had converged on the ancient site at Orile Oje in the precincts of Arowomole, the headquarters of modern day Ogbomoso South Local Government Area of Oyo State. It was the 179th edition of the annual festival, which was hitherto known as Odoje Festival. And the seriousness with which the people took the event was palpable as they hurriedly made their way to the location as it approached 9:30am. It’s their day and they didn’t want to miss any part of the festival. “The Kabiyesi is already seated; he had arrived there since around 8am and we must arrive to time,” one hurrying motorcyclist volunteered.

Indeed, the traditional and religious head of Ijeruland, the Onpetu, Oba Sunday Oladapo Oyediran, Lagbami Osekun III, was already on his throne flanked by his Olori, Esther Subuola; his chiefs and some of the invited dignitaries and Christian clerics.

The traditional hunters and sundry arms of the community’s make up were already in their elements and soon, the 2019 Odun Oba kicked off with the rendering of the national and Ijeru anthems.

The people of Ijeru in Ogbomoso had been joined by the Eleruwa of Eruwa, Oba Samuel Adebayo Adegbola and his Olori; the Mogaji Lasinmiran of Onpetu from Ilorin in Kwara State and the Olu Aso of Iberekodo, Pastor Badmus Jamiu Adedamola among other Onpetu children from Ibadan, Ilorin, Offa, Ede, Gbogan, Osogbo, Obada, Olomoda, Ara and so on. The children of Onpetu had paid their obeisance to the Onpetu Oyediran as they arrived at the event at Orile Oje and thereby reiterated their loyalty to the king.

Of course, they had turned out in their various colourful uniforms a parts to hear their king and also receive his blessings. While welcoming them, the thankful Oba Oyediran recalled that their gathering last year had been rewarding because, according to him, apart from the grace to be alive to celebrate another edition, he was happy to “report that we did not record any misfortune within the year.”

The Onpetu explained that the 2019 festival was special because “we are better than we,” and reiterated that there was the need for all of them to be grateful to God Almighty for the epoch, and continue to work for the glory and uplift of Ijeruland wherever they might be. “Onpetu children all over the world should know themselves. If the Onpetu children knew themselves as children of the same father, they would not engage in tussles that could harm them,” Oba Oyediran explained.

The monarch said the Odun Oba Onpetu was one of such events through which Onpetu children would know themselves and work together for the benefit of one another. Onpetu Oyediran added that the festival was also a thanksgiving, noting that the prayers answered from the last edition were instructive. In thanksgiving to God, Kabiyesi said: “In 2018, a land dispute, which is very central to the throne of Onpetu and to the very heart of Ijeruland, was resolved in our favour by the Supreme Court. Only God knows what would have become of us if it had gone the other way.”

Further to his thanksgiving, the monarch gave some of the reasons for which the entire Ijeruland and all children of Onpetu should be grateful to the Almighty as, according to him, the prayers of the people at the last Odun Oba Onpetu were favourably answered.

“We approached one of us and he graciously donated virtually a new maternity ward at the general hospital. Many of us know that the maternity there couldn’t take more than one expectant mother at a time; but now it can take no fewer than four mothers at any point in time, and the new facility is well equipped.

“May I also announce to you that one of our sons we approached with a list of requests for Ijeru pointedly told us that he would not be able to tackle all the problems. We agreed with him to take them one after the other. He has donated a new, fully-functional, well-equipped ambulance, which we could refer to as a mobile hospital considering the array of modern equipments in the ambulance.

“These are some of the reasons for which the children of Ijeruland should eternally be grateful to the Almighty God. You will remember the position of this throne in the recent past and where we are now. Where we were in the past cannot be compared to where we are now.”

Following a sermon, prayers and songs by respective Christian clerics and musical groups, the Onpetu retired to the inner recesses of the sacred land and reappeared in ancient Arè, a unique crown that is known with only the Ooni. “In history, no Ooni will be so called until the Onpetu gives him the Arè. The Arè I’m wearing is the type worn by the Ooni in Ile Ife, it’s markedly different from the crowns won by other Kabiyesis in Yorubaland,” the Onpetu noted as he settled down to pray for the people.

With the crown nestled on his royal head, he had become primed by his progenitors to pray for his people and this he did with commendable verve. He prayed for the land, its people and did not forget to pray in no unmistakable ways for the enemies of Ijeruland and its throne. The Onpetu’s ìwúre was the highlight of the events at the Orile Oje.

Seeing the Onpetu in Arè crown should make the people of Ijeru proud. Onpetu is one of the children of Oduduwa, the progenitor of the Yoruba race and was the head of Ido, now Moore in Ile Ife. Mogaji Lasinmiran said they remain proud children of Onpetu, even though they are settled in Ilorin. “Yearly we come to Orile Oje site for the celebration of our forefathers, and we thank God. In Ilorin, we also celebrate and the Onpetu joins us. Cooperation among all of us is imperative, and we continually pursue it.”

The people departed Orile Oje for the Onpetu’s palace at Oja Oba in Ogbomoso, where they continued with the celebration and merry-making. Among other things, the second part of the Odun Oba Onpetu entails paying of homage to the Kabiyesi. The organised homage by the various households namely Osekun, Oluyale, Asamu/Atoyebi, Atobatele, and Olude; and the Baales, chiefs and children of Onpetu from far and near forms a major attraction of the vivacious ceremony.

The Onpetu children should also be proud of their fathers’ legacies because the Orile Oje site has been declared a national heritage site by the Federal Government. And it is being built as various development projects are springing up at the site. The Onpetu said the site would have, among other projects, a worship centre, the foundation of which had been laid and work ongoing.

And it is the contention among them that they should rally round the Onpetu Oyediran Lagbami Osekun III “because of the steps he has taken to bring the site to life.” The traditional ruler said “The Orile Oje relics is an approved tourist centre by the Federal Government. Our intention is to make it a tourist haven. Towards achieving this vision, we commissioned Dr Adisa Ogunfolakan to conduct an archaeological survey of the site. The preliminary report was published on July 20, 2016, but due to paucity of funds, we haven’t been able to pursue the project further,” Oba Oyediran stated.