Former Nigerian Queen of the track, Mary Onyali has said that Nigerians should not expect Team Nigeria to churn out better results than they did four years ago when the XXI Commonwealth Games takes place in April. 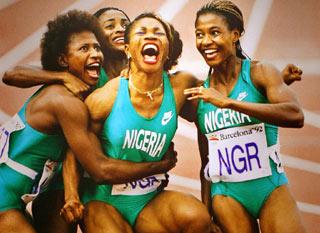 Onyali thinks the lesser the number of sports and athletes participating at the Games, the lower our expectation for medals.

“We can’t surpass our medal haul in 2014 because we are going to be involved in 10 sports in this 2018 Games unlike the previous editions, we went with 14 or 15 sports. There are more chances and opportunities in winning more medals when you go with more sports,” she said.

She also pointed out harsh weather condition as another factor that would deprive the athletes in Australia.

“The situation may even be more critical as far as medal haul is concerned because Australia is in the most Southern Hemisphere and their summer which is supposed to be the warmest part of their season is not in line with our summer, their summer is on right now. Athletics is where most of our medals are won in major championship.”

“October- April is when we consider our build up to the new season. During this period, athletes are heavy in training, not sharp, not fast and ready for speed work and competitiveness. We actually start competing competitively from April, May, June, July, August which is our peak so this period is an off peak period in athletics.”