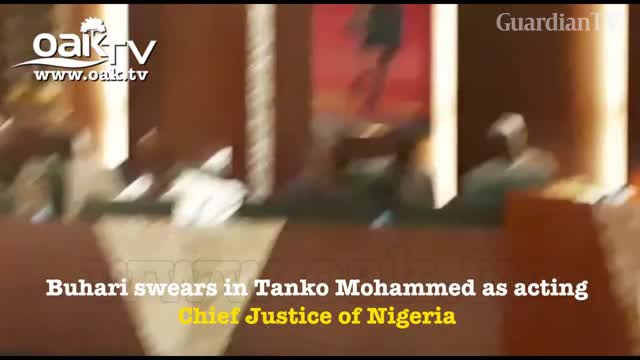 President Muhammadu Buhari yesterday announced the suspension the Chief Justice of Nigeria (CJN), Justice Walter Onnoghen, pending the completion of his trial at the Code of Conduct Tribunal (CCT).

Making the announcement at the Council Chamber of the Presidential Villa, Abuja, President Buhari said the decision followed an order of the CCT directing him to suspend Onnoghen, pending the completion of his trial.

It would be recalled that Onnoghen has facing trial over alleged false assets declaration brought against him by the Code of Conduct Bureau (CCB).

Meanwhile, the President has sworn-in Justice Ibrahim Tanko Mohammed as the acting CJN.

Mohammed who hails from Bauchi state is the most senior justice of the Supreme Court. He was conveyed to the Presidential Villa at about 4.30pm in a black Mercedes Benz C240 with number plate GWA 900FA.

“The nation has been gripped by the tragic realities of no less a personality than the Chief Justice of Nigeria himself becoming the accused person in a corruption trial since details of the petition against him by a Civil Society Organization first became public about a fortnight ago.

“Although the allegations in the petition are grievous enough in themselves, the security agencies have since then traced other suspicious transactions running into millions of dollars to the CJN’s personal accounts, all undeclared or improperly declared as required by law.

“Perhaps more worrisome is the Chief Justice of Nigeria’s own written admission to the charges that he, indeed, failed to follow the spirit and letter of the law in declaring his assets, citing ’’mistake’’ and ’’forgetfulness’’ which are totally unknown to our laws as defences in the circumstances of his case.

“One expected that with his moral authority so wounded, by these serious charges of corruption, moreso by his own written admission, Mr. Justice Walter Onnoghen would have acted swiftly to spare our Judicial Arm further disrepute by removing himself from superintending over it while his trial lasted.

“Unfortunately, he has not done so. Instead, the nation has been treated to the sordid spectacle of a judicial game of wits in which the Chief Justice of Nigeria and his legal team have made nonsense of the efforts of the Code of Conduct Tribunal to hear the allegation on merit and conclude the trial as quickly as possible considering the nature of the times in which we live.

“Whether deliberately or inadvertently, we have all seen the full weight of the Chief Justice of Nigeria descend on the tender head of one of the organs of justice under his control. There is simply no way the officers of that court, from the Chairman to the bailiffs, can pretend to be unaffected by the influence of the leader of the Judiciary.

“Not only the trial court, but others have been put on the spot. Practically every other day since his trial commenced, the nation has witnessed various courts granting orders and counter-orders in favour of the Chief Justice of Nigeria, all of them characterised by an unholy alacrity between the time of filing, hearing and delivery of judgment in same.

“The real effect has been a stalling of the trial of Justice Onnoghen, helped along by lawyers who insist that these orders, whether right or wrong are technically valid, and must be obeyed till an appellate Court says otherwise. No doubt, that it is the proper interpretation, but is it the right disposition for our nation?

“Nigeria is a constitutional democracy and no one must be, or be seen to be, above the law. Unfortunately, the drama around the trial of the Chief Justice of Nigeria has challenged that pillar of justice in the perception of the ordinary man on the street.

“For it is certain that no ordinary Nigerian can get the swift and special treatment Justice Onnoghen has enjoyed from his subordinates and privies in our Judicature.
“In the midst of all these distracting events, the essential question of whether the accused CJN actually has a case to answer has been lost in the squabble over the form and nature of his trial. This should not be so.

“If Justice cannot be done and clearly seen to be done, society itself is at risk of the most unimaginable chaos. As a Government, we cannot stand by wailing and wringing our hands helplessly but give our full backing and support to those brave elements within the Judiciary who act forthrightly, irrespective of who is involved.

“As you are all aware, the fight against corruption is one of the tripod of policies promised to Nigerians by this administration. Needless to say that it is an existential Policy, which must be given adequate attention and commitment by all the three arms of government.

“The efforts of the Executive will amount to nothing without the cooperation of the Legislature and especially the Judiciary.

“It is no secret that this government is dissatisfied with the alarming rate in which the Supreme Court of Nigeria under the oversight of Justice Walter Onnoghen has serially set free, persons accused of the most dire acts of corruption, often on mere technicalities, and after quite a number of them have been convicted by the trial and appellate courts.

“Since there is nothing the Executive Arm can do after the apex court of the land has spoken on any matter, several of these individuals walk free among us today, enjoying what are clearly the proceeds of the corruption which for so long has defeated the efforts of this nation to develop and prosper.

“It is against this background that I have received the Order of the Code of Conduct Tribunal directing me to suspend the Chief Justice pending final determination of the cases against him.

“It also explains why I am not only complying immediately, but with some degree of relief for the battered sensibilities of ordinary Nigerians whose patience must have become severely over-taxed by these anomalies.

“In line with this administration’s avowed respect for the Rule of Law, I have wholeheartedly obeyed the Order of the Code of Conduct Tribunal dated 23rd January 2019.

“Accordingly, I hereby suspend the Honourable Mr. Justice Walter Nkanu Samuel Onnoghen, GCON as the Chief Justice of Nigeria pending final determination of the case against him at the Code of Conduct Tribunal.”

“In further compliance with the same Order of the Code of Conduct Tribunal, I hereby invite Honourable Justice Ibrahim Tanko Mohammed JSC, being the next most Senior Justice in the Supreme Court, to come forward to take the Judicial Oath as Chief Justice of Nigeria in an Acting Capacity.

“Fellow Nigerians, we can only stand a chance to win the fight against corruption, and position our dear nation for accelerated development when we stand together to contend against it.”

Present at the meeting were the Inspector-General of Police, Mohammed Adamu, the Director-General, Department of State Service, the Director-General, National Intelligence Agency, NIA, Minister of Justice, Abubakar Malami, Chairman, of the Economic and Financial Crimes Commission, EFCC, national Chairman of the All Progressives Congress, Comrade Adams Oshiomhole, the Minister of Transportation, Rotimi Amaechi, that of Education, Adamu Adamu, Foreign Affairs, among others.

Justice Onnoghen had earlier yesterday, through his media assistant, Awassam Bassey, announced a plan to swear in members of the various 2019 election petition tribunals on Saturday, January 26.

Onnoghen also described as absolute falsehood, the media reports that he resigned his office, following current allegations against him.

The Attorney General of the Federation, Abubakar Malami, had also requested that Onnoghen resigns from office, following the various allegations.

The case, currently ongoing at the CCT was adjourned till January 28, 2019.

However, the Court of Appeal on Thursday ordered the tribunal to suspend sitting, pending the discharge of current applications filed before it and had fixed January 30, 2019 for ruling.