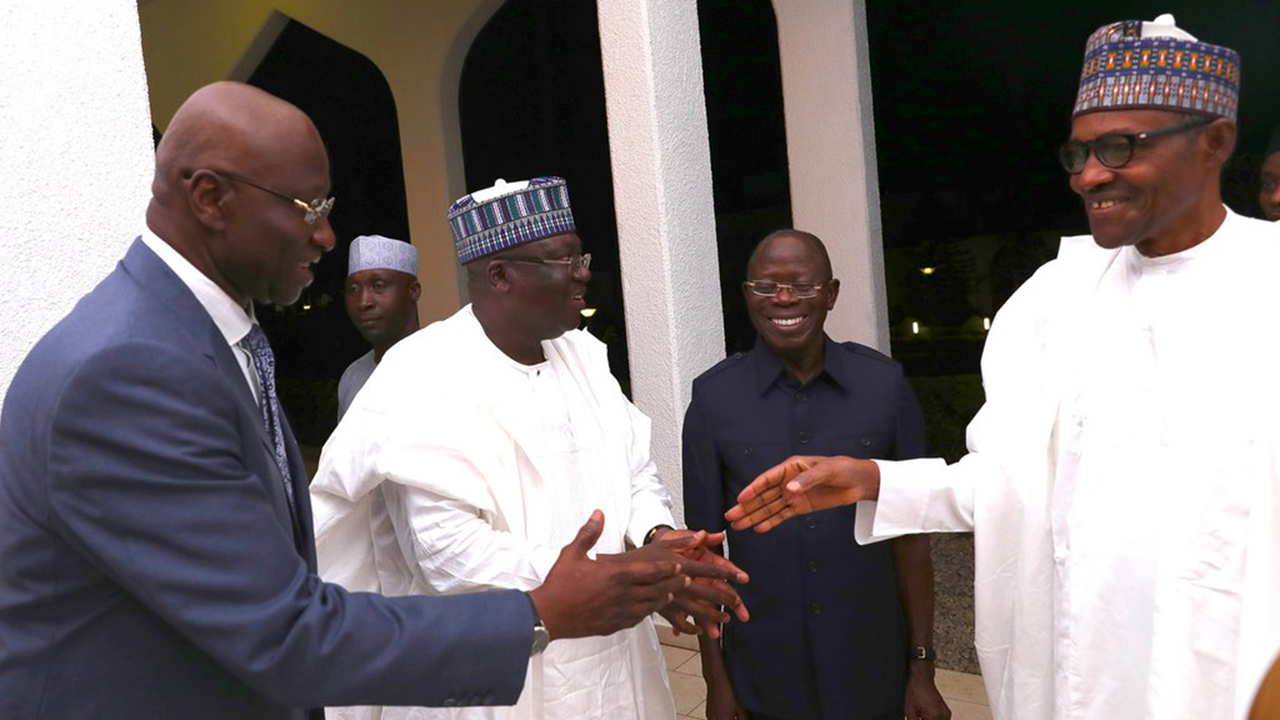 Bickering within the ruling All Progressives Congress (APC) over who becomes president of the Ninth Senate came to the fore yesterday with former Senate Majority Leader Muhammed Ali Ndume criticising the endorsement of Senate Leader Ahmed Lawan by President Muhammadu Buhari and the party’s leadership.

Ndume described the validation as unconstitutional and undemocratic, saying the decision was taken without consultation with APC senators-elect.

The APC spoke through National Chairman Adams Oshiomhole on its choice in Abuja on Monday. It told its 65 senators-elect during a dinner at the Presidential Villa that Lawan (Yobe North) had its nod for Senate president and Femi Gbajabiamila for Speaker of the House of Representatives.

But faulting the party’s position at a media briefing in Abuja, Ndume said the endorsements were contrary to the provisions of Section 50(1A) of the 1999 Constitution as amended.

The section states: “There shall be a president and deputy president of the Senate who shall be elected by the members of that House from among themselves.”

According to Ndume, neither Oshiomhole nor Buhari or any party leader has the right to force presiding officers on lawmakers.

He said: “What took place at the presidential dinner in Aso Rock on Monday night where Oshiomhole as party chairman, announced Senator Ahmed Lawan and Hon. Femi Gbajabiamila as President of the 9th Senate and Speaker of the House of Representatives respectively was very shocking to me and many of my colleagues.

“Oshiomhole, in making the announcement or endorsement, did not even allow me or Senators Danjuma Goje (Gombe Central) and Abdullahi Adamu (Nasarawa West), widely known to be in the race for the position, to say anything.

“More disturbing was the fact that even Senator Ahmed Lawan, endorsed for the position, was not allowed to make any comment in the form of an acceptance speech or to solicit support from other interested senators.”

He said: “For the sake of cohesion and stability among party members as regards aspirations for such positions, what was expected from the party leadership, was to just zone the positions and allow contenders within each of the zones to sort things out either through consensus or shadow election.”

Ndume expressed doubt whether “Buhari was in the know of what Oshiomhole did.” According to him, “We all left the place in shock and disbelief. But my commitment and loyalty to the party remains.”

Recall that before the inauguration of the Eighth Senate on June 9, 2015, the APC leadership endorsed Lawan and Gbajabiamila for the positions of President and Speaker. Both men however lost out amid deft political moves by other party members.

While the ruling APC deals with squabbles on who clinches the legislative offices, the opposition Peoples Democratic Party (PDP) raised tension a notch higher yesterday by announcing it would field candidates for the two seats.

A statement by National Publicity Secretary Kola Ologbondiyan declared: “The PDP does not only have a constitutional say in the process of the emergence of the leadership of the Ninth National Assembly, it will also, as a matter of constitutional right, field candidates into presiding offices of both chambers, if need be.”

Faulting remarks by Oshiomhole that APC would not share any position with the opposition, the PDP noted that the principal offices of the federal legislature “are not the exclusive preserve of any political party but a constitutional right of every elected lawmaker in both chambers.”

It cautioned Buhari, Oshiomhole and the APC “to respect the independence of the legislature, end their imposition plot and sowing of the seeds of discord among lawmakers, as such is directly against our overall national interest.”

The PDP caucus in the Senate also warned the APC to stop dropping the name of incumbent Senate President Bukola Saraki in plots to get the chamber’s positions.

A statement by Senate Minority Leader Biodun Olujimi and Chairman Senate Committee on Federal Capital Territory Dino Melaye, said: “We have noted with regret and surprise how some senators who are interested in becoming the next Senate president and those seeking to occupy various leadership positions in the next Senate have been busy dragging the name of the Senate President Bukola Saraki into schemes for fulfilling their ambitions. We believe those involved in this dirty game are only afraid of the shadow of the Senate President.”

The APC’s bid to endorse a candidate for Senate President is not unconnected with perceptions within the party that Saraki has been a thorn in the flesh of the Buhari presidency.

The caucus warned: “Such surreptitious attempts to drag Saraki into the issue that does not concern him would not augur well for the smooth takeoff of the next Senate and could only create suspicion and ill-will among the incumbent senators and the incoming ones.”

It added: “Such people should know that Dr. Saraki is not interested in their plots, schemes and manipulation. His concern now is to continue to provide leadership to the Eighth Senate and ensure that the Senate achieves as much as possible in the remaining two months of its tenure.”

In the House of Representatives, Chairman House Committee on Media and Publicity Abdulrazak Namdas yesterday threw his hat into the race for the position of speaker. Two of his colleagues, Nkeiruka Onyejeocha and Chika Okafor, are also vying for the seat.

A pro-democracy and non-governmental organisation, Human Rights Writers Association of Nigeria (HURIWA), meanwhile has cautioned Buhari and the APC leadership against undermining the principle of separation of powers.

It claimed it has “a corpus of high net intelligence from elected legislators” showing there is “a pre-determined plot by President Buhari to ensure the inauguration of a fully choreographed and rubber-stamp legislature that would be led by mostly individuals with past misdeeds, which might be used as instruments of blackmail by heads of security forces and the anti-graft institutions to keep them in perpetual chain of control by the presidency.”

The organisation therefore called on legislators to resist the temptation of mortgaging and commercialising the constitutional right to elect their leaders.

In a statement by its National Coordinator, Comrade Emmanuel Onwubiko, and National Media Affairs Director, Miss Zainab Yusuf, HURIWA said the immediate consequence of having a rubber-stamp and non-vibrant legislative arm of government is that dictatorship and tyranny would become full-blown, even as other fundamental freedoms enshrined in the constitution would be imperilled.

HURIWA noted that time was running out to stop the alleged plot to enslave Nigerians.