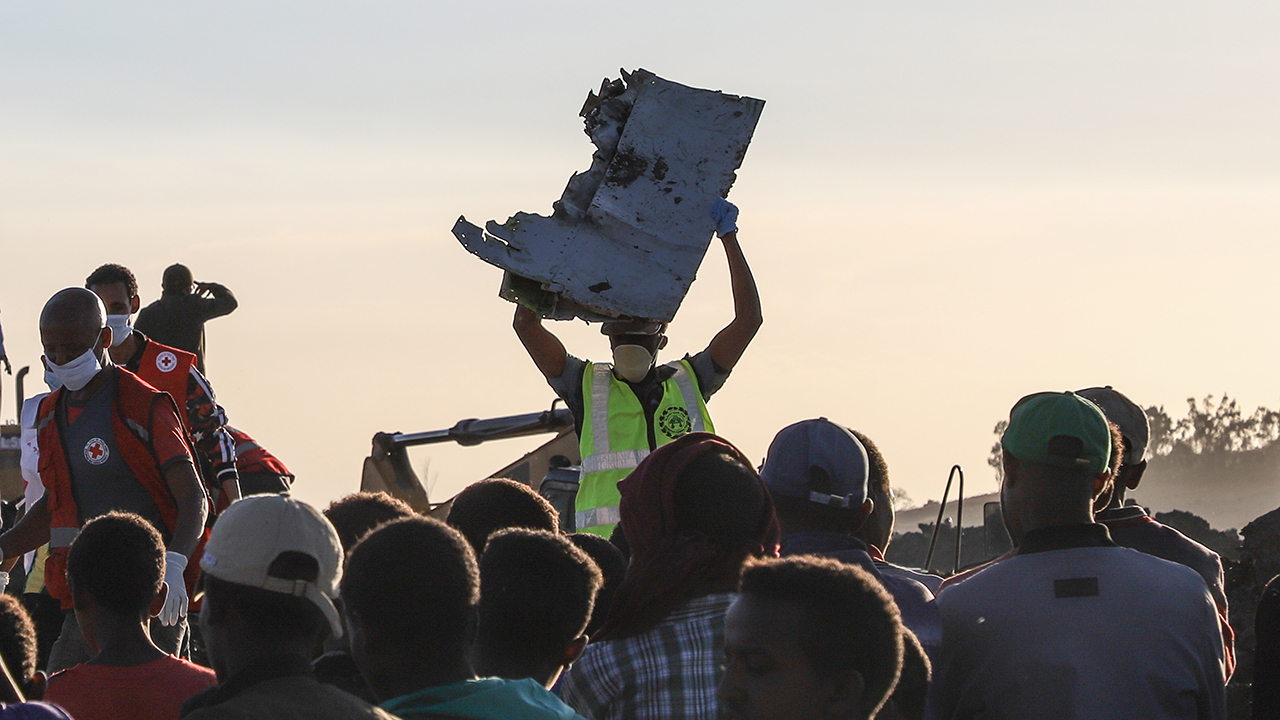 A man carries a piece of debris on his head at the crash site of a Nairobi-bound Ethiopian Airlines flight near Bishoftu, a town some 60 kilometres southeast of Addis Ababa, Ethiopia, on March 10, 2019. – A Nairobi-bound Ethiopian Airlines Boeing crashed minutes after takeoff from Addis Ababa on March 10, killing all eight crew and 149 passengers on board, including tourists, business travellers, and “at least a dozen” UN staff. (Photo by Michael TEWELDE / AFP)

Global concerns are mounting over the safety of the state-of-the-art Boeing 737Max aircraft type that crashed and killed all 157 persons in Ethiopia on Sunday.

The fears may have arisen against the background that the Sunday mishap makes it second in six months when a brand new make of the facility would perish minutes into a flight.

Meanwhile, experts have urged Air Peace to tread with caution in operating the aircraft, even as the carrier denied having started using it in Nigeria.

The carrier, last September, signed a Memorandum of Understanding (MoU) with Boeing to acquire 10 of the aircraft.

The biggest bid ever submitted by an airline in West Africa is to launch Air Peace into the league of major carriers in the world, showcasing some of the most attractive, efficient and state-of-the-art wide body aircraft globally.

But in the wake of the fresh concerns, the management has said it was watching the development “very carefully.”

According to the airline’s Corporate Communications Manager, Chris Iwarah, contrary to the claims that the carrier already operates the aircraft locally, they are yet to receive any of the orders as the manufacturer is still in the process of configuring them to specification.

He said: “We are yet to take delivery of the aircraft as we are still at the design and configuration stage of the order. This clarification has become necessary in view of numerous calls and enquiries on our response to the incidents involving the B737 Max 8 aircraft.

“Although it is premature to comment on the incidents, we wish to assure members of the flying public that we are closely following and monitoring developments as an airline that prioritises the safety and well-being of our customers.”

Aviation security expert, Group Capt. John Ojikutu (rtd), advised the Nigerian firm to wait until the hidden manufacturing problem on the aircraft is solved.
“There are still good aircraft in the market that can do as much as the 737 on our domestic and regional routes,” he said.

Ojikutu added that following the Lion Air crash in October, Boeing should have withdrawn the aircraft type to do a thorough investigation review of the causes of the incessant accidents on the model.

“The rush or the competition between Airbus and Boeing is also not too healthy for commercial aviation services. Which international body is auditing their products outside or besides the states of manufacturing?” the expert queried.

One hundred and fifty persons, among them two Nigerians, died on Sunday when a B737Max aircraft operated by Ethiopian Airlines crashed shortly after takeoff from Bole International Airport, Addis Ababa, Ethiopia.

The aircraft, with registration ET-AVJ, lost contact with the radar about six minutes after takeoff, en route Nairobi, Kenya. Onboard were 149 passengers and eight crewmembers.

The latest tragedy comes after a Lion Air flight went down over the Java Sea last October, killing all 189 people on board.

While the global aviation community awaits reports of investigation, airlines are getting worried over the development. India has immediately sought information from Boeing, shortly after grounding all B737MAX in its domain.

In India, SpiceJet and Jet Airways had both ordered 430 Boeing 737 Max 8s. The Directorate General of Civil Aviation (DGCA) had a day after the Lion Air crash reviewed the performance of the six facilities with the Indian carriers. It had then said that “there are no sufficient technical issues encountered on these aircraft.”

While still maintaining that the cause of the accident was yet unknown, Ethiopian Airlines has, however, grounded its four remaining B737 MAX 8s “as an extra safety precaution.”

On its part, the Civil Aviation Administration of China (CAAC) had ordered local operators to ground their planes.

“In line with the management principle of zero tolerance for safety hazards and strict control of safety risks and to ensure the safety of civil aviation in China, at 0900L on March 11, the Civil Aviation Administration issued a notice requesting domestic airlines to suspend the commercial operation of the Boeing 737 MAX 8 aircraft as from 1800L on March 11, 2019,” the regulator said in a statement.

According to the Chinese aviation fleets module, Chinese airlines operate 93 out of a total of 339 active B737 MAX 8s around the world.