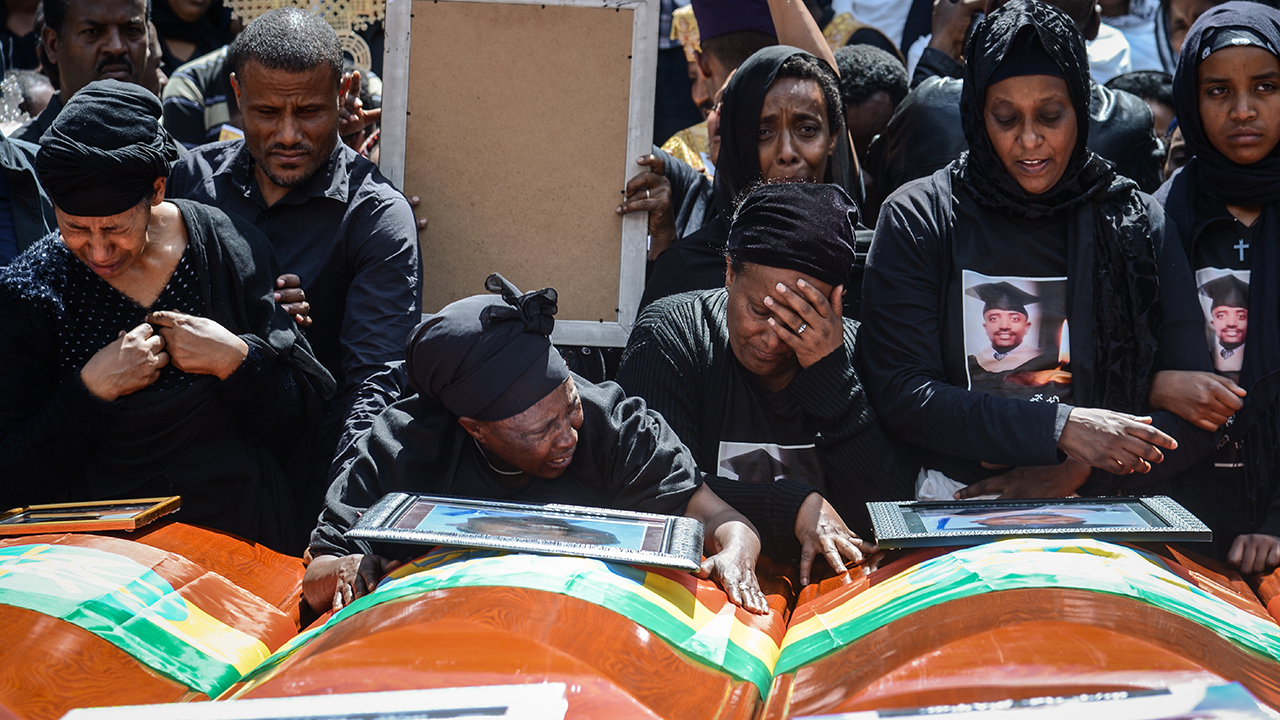 Mourners of victims of the crashed accident of Ethiopian Airlines react beside coffins during the mass funeral at Holy Trinity Cathedral in Addis Ababa, Ethiopia, on March 17, 2019. – The crash of Flight ET 302 minutes into its flight to Nairobi on March 10 killed 157 people onboard and caused the worldwide grounding of the Boeing 737 MAX 8 aircraft model involved in the disaster. (Photo by Samuel HABTAB / AFP)

Families of the 157 Ethiopian Airlines plane disaster were at the weekend given bags of scorched earth from the crash site in place of bodies for burial.

The measure was taken because the forensic identification of bodies will last six months.

It was also confirmed that none of the bodies were intact as they were all charred and fragmented.

“The soil came as it became impossible to identify bodies and hand over remains to family members. We will not rest until we are given the real body or body parts of our loved ones,” one family member said.

“We were told by the company that we will be given a kilo (of earth) each for burial at Selassie Church for a funeral they will organise,” another family member added.

Forensic DNA work has begun to identify the remains. But it may take six months to establish each of the victims of the crash, who came from 35 different countries, among them two Nigerians.

Authorities say they will issue death certificates within two weeks.

On Sunday an aircraft hangar in the Ethiopian capital Addis Ababa was filled with white roses as aviation staff gathered to remember the two pilots and six crew members who died in the incident.

The flowers, traditionally used to mark the passing of lives, were placed in front of a row of empty coffins at the ceremony.

“Our deep sorrow cannot bring them back,” an Orthodox priest in a traditional black turban and black robes told the crowd.

Multiple agencies are working to establish the cause of the disaster, while Interpol and Blake Emergency Services, hired by Ethiopian Airlines, will work with the Ethiopian police and health officials to identify the bodies.

A number of countries have grounded the type of plane, a Boeing 737 Max 8, involved in the crash.

Boeing said it supported the grounding of its planes as a precautionary step but reiterated “full confidence” in their safety.