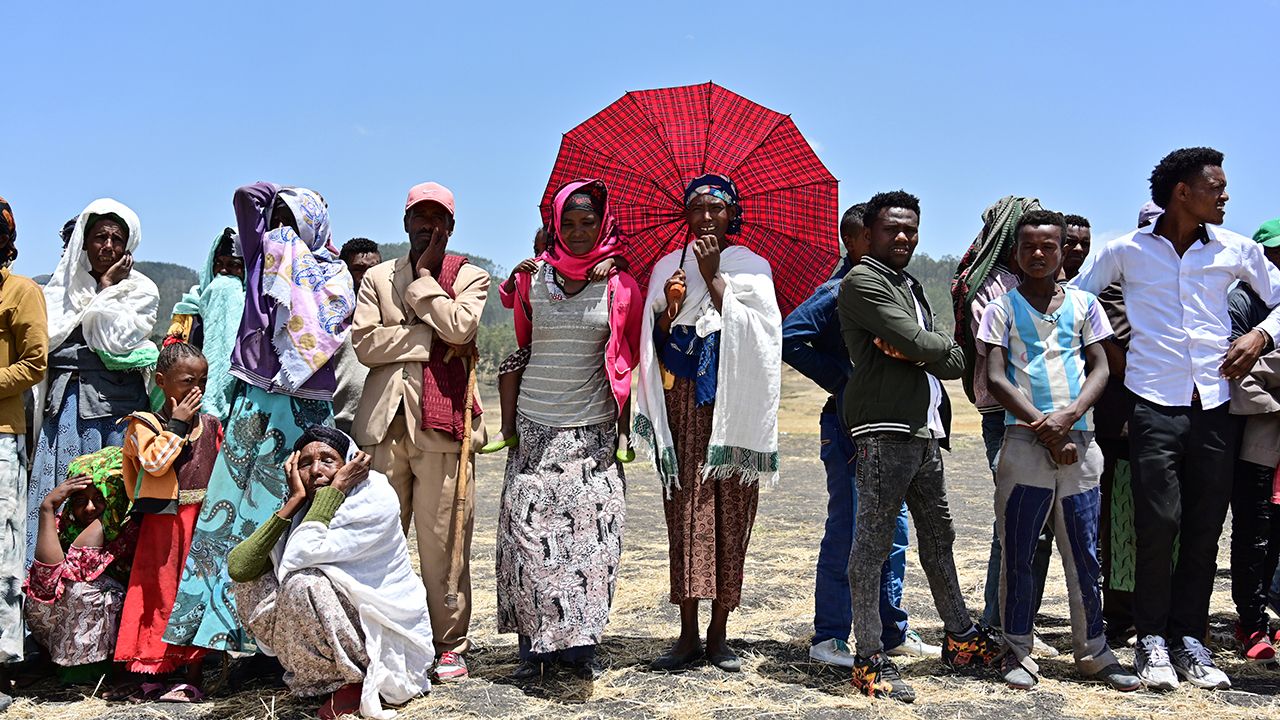 Villagers from Hama Quntushele village weep as relatives of the victims of the Sunday plane crash visit the crash site of the Ethiopian Airlines operated Boeing 737 MAX aircraft, in the Oromia region, on March 13, 2019. – A Nairobi-bound Ethiopian Airlines Boeing crashed minutes after takeoff from Addis Ababa on March 10, killing all eight crew and 149 passengers on board, including tourists, business travellers, and “at least a dozen” UN staff. Families of the victims were taken to the remote site on March 13, 2019, where the plane smashed into a field with 157 passengers and crew from 35 countries, leaving a deep black crater and tiny scraps of debris. (Photo by TONY KARUMBA / AFP)

The families of the 157 persons who died in the Ethiopian Airlines (ET) plane crash on Sunday may sue the aircraft manufacturer, Boeing and its insurers, for compensation to the tune of N762.5 million ($2.5 million) per person.

The chances of lawsuits and favourable hearing brightened yesterday when the United States Federal Aviation Administration (FAA) admitted similarities between Sunday’s crash and a previous one in Asia, about five months ago.

The connection, if fully established in the ongoing investigation, would make Boeing liable to faulty plane claims.

The American government late Wednesday bowed to international pressure to ground the B737Max 8 and 9 airplanes, following serious safety concerns after Sunday’s crash in Ethiopia. Till date, over 41 countries, including Nigeria, have banned the aircraft from their airspaces.

U.S. President Donald Trump told reporters that the “safety of the American people and all people is our paramount concern.”

“Hopefully, they will come up with an answer but until they do, the planes are grounded,” Trump said.

According to the FAA acting chief, Daniel Elwell, the agency has been “working tirelessly” to find the cause of the accident but faced delays because the black box flight data recorders have been damaged.

The new information shows “the track of that airplane was close enough to the track of the Lion Air flight, to warrant the grounding of the airplanes so we could get more information from the black boxes and determine if there’s a link between the two, and if there is, find a fix to that link,” Elwell said.

But the implication is far-reaching for Boeing. Though the initial insurance payments will be made by the Ethiopian Airlines’ insurers, they may look to recoup their money from Boeing’s insurers, if they can prove that the aircraft was faulty, a source said.

Initial payments to the passengers’ families are bound by the Warsaw and Montreal conventions, but those payouts could be much higher if families pursue legal claims, particularly through U.S. courts, the head of law firm Irwin Mitchell’s travel litigation group, Clive Garner, said.

“If there were to be anything defective in terms of the plane or any of its components, then it would be possible to bring a claim against the manufacturer as well as the airline.”

Insurers typically form a consortium to share the risks of large claims, with the lead insurer taking a larger proportion of the risk. The insured value of the plane itself was likely around $50 million, according to industry sources.

It is not uncommon for the planemaker, which is headquartered in Chicago, to face lawsuits in the United States, where legal compensation payments for the crash victims could run around $2 million to $3 million per person, depending on the law applied, compared to about $200,000 in Ethiopia, a U.S. aviation lawyer, Justin Green, said.

Reports have it that U.S. courts often throw out such lawsuits, given the difficulty of finding witnesses overseas, but the fact that eight U.S. citizens were killed in the Ethiopian Airlines crash increases the likelihood that the litigation on behalf of all victims’ families could be heard by a U.S. court, Green said.

Meanwhile, the University of Ibadan community has staged a walk in honour of one of the victims of the Ethiopian Airlines’ plane crash, Pius Adesanmi, and 56 others.

Deans of faculties, heads of departments and other professors participated in the walk from the university main gate to the Faculty of Arts and Humanities.

Former Dean, Faculty of Arts, Prof. Remi Raji-Oyelade, said the deceased was a driving spirit for many academic achievements in the institution.

He narrated his last dialogue with Adesanmi, concluding that the crash victim had the feeling of his imminent death. “We had been talking for the past three weeks and Pius kept mentioning death. I believe he saw his death coming.”

Raji-Oyelade said that the nation should take solace in the legacy and immense contribution of Adesanmi to the development of literature, Africa and humanity.

The Dean of the Faculty of Arts, Prof. Ademola Dasylva, who gave an account of how he would have been a victim of the fatal crash, said he was also invited for the same conference. He said Adesanmi and himself stayed in the same hotel until the time of his departure, adding that while he was assigned to stay in Addis-Ababa, Ethiopia, Adesanmi left for Kenya.

Describing his death as unfortunate, Dasylva said Adesanmi’s contribution to the war against mediocrity in Nigeria would not be in vain.

The chief organiser of the walk, Ropu Ewenla, said rather than mourn Adesanmi, Nigerians should celebrate him for his well-lived life.