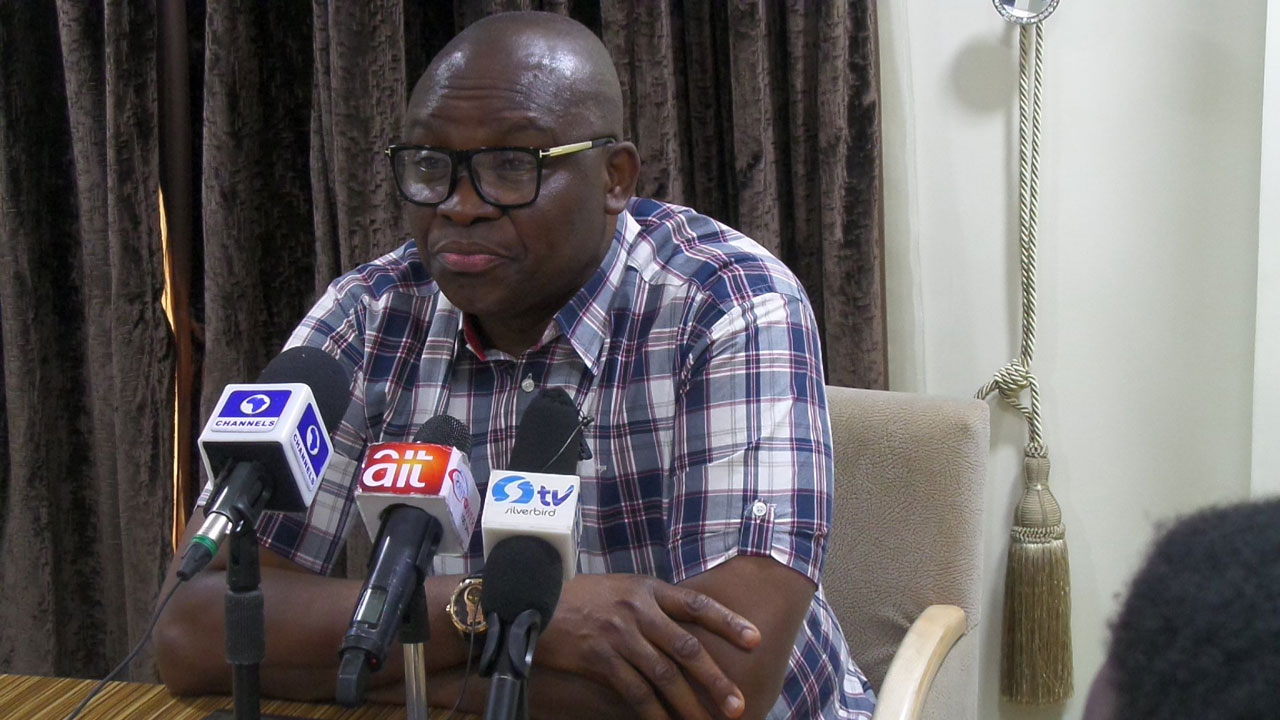 Crisis has engulfed Ekiti State Chapter of the Nigeria Labour Congress (NLC) and the Trade Union Congress (TUC) as two different factions issued different directive to workers over unpaid salary arrears.Some workers, led by former chairman of the NLC, Ayodeji Aluko and his counterpart in TUC, Kolawole Olaiya, led the “rescue team” who declared industrial action against the state government.

The former labour leaders, under the auspices of Ekiti Workers Rescue Team, had embarked on protest at about 8.25 a.m. and addressed the workers in front of the secretariat where they ordered their members to leave their offices and begin an indefinite strike.They said it was wrong for Governor Ayodele Fayose who accused former Governor Kayode Fayemi of insensitivity for owing one month’s salary in 2014 to have betrayed the trust and confidence the workers reposed in him that earned him victory in 2014.

The rescue team also dissolved the state executives of the NLC and TUC respectively, alleging that they have become passive and shying away from carrying out their responsibilities as labour leaders.The leader of the faction, Aluko, said: “Today, we are dissolving the executives of the NLC and TUC in Ekiti State and they stand dissolved because their leaders, Ade Adesanmi and Odunayo Adesoye, have lost their values. They are no longer talking about the welfare of the workers they were expected to defend.

“We decided not to do this protest before election so that they won’t read political meanings to it. Workers have died just because they are not paid. In 2014, Governor Fayose said any governor who owed just a month salary because he is building infrastructure doesn’t worth being a governor.“Today, the governor is owing pensioners 10 months, local council workers eight months and civil servants and teachers are being owed six months. We are not fighting Governor Fayose but he must pay the workers.”

However, Chairman of the NLC in the state, Mr. Raymond Adesanmi, decried the action of Aluko, Olaiya and others, saying: “They are looking for political appointments. Otherwise, if that is not the case, I don’t know what their grievances are.”He described them as jokers who do not possess such powers to either declare strike or dissolve the NLC and TUC.

Adesanmi, who spoke with The Guardian on telephone, said: “What they’ve been hammering on is that days after Fayemi lost election in 2014, workers went on strike. It was not even the leadership of the NLC then that gave the strike notice, it was the JNC, which Aluko leadership appointed then. Aluko had been working with the JNC then for over a year before we came on board. So, if they have a problem with the JNC, they should go and sort it out with them.

“That they went on strike then does not mean that we should go on strike now. Even if we are going to go on strike, do they have the constitutional right to call people out? They had tried several strategies that didn’t work, but they now resorted to going to beat people up in their offices at the secretariat. That is uncalled for. It is condemnable.”

Also, Adesoye, who described the dissolution as not only illegal, null and void but flies in the face of law as prescribed by International Labour Organisation (ILO), said: “I don’t think they have such power to dissolve an organised labour centres as former leaders. Only the national bodies could do such.”