INEC Chairman Rules Out E-Voting In 2019

INEC Chairman Rules Out E-Voting In 2019 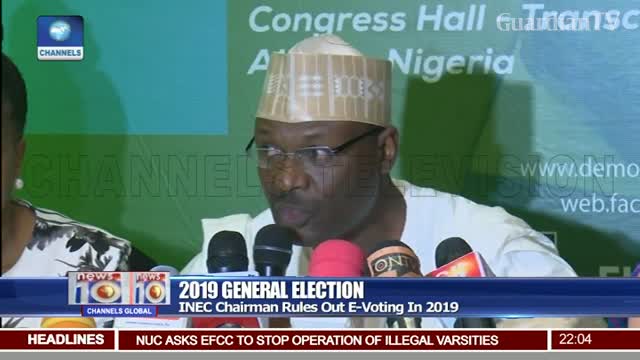 Civil Society Organisations (CSOs) have called on eligible voters in Anambra to register with the Independent National Electoral Commission (INEC) before the end of the current phase of the Continuous Voter Registration (CVR).

The groups made the call in Awka during a one-day sensitisation workshop on Electoral Participation for youths on Sunday.

Mrs Chioma Okeke, Coordinator, Shoulder for Gender Support and Development Initiative, decried the level of political apathy in Anambra and the South-East.

Okeke called on the participants, mostly youths, to avail themselves with the window provided by the ongoing CVR and register.

She said some of the identified challenges in registration of voters in Anambra include: absence of INEC registration officials at advertised venues, alleged extortion of those wishing to register by officials and non collection of Permanent Voter Cards(PVCs)

“INEC has to do more to cover eligible voters in the ongoing registration process, while in some places, efforts are made to register people even up to going to their houses, here people go to designated places and the officials are not there,” she said.

On his part, Mr Chukwuma Chukwura, Coordinator of Kingsfaith Development and Youth Empowerment Initiative, expressed concern that people could not take time off their daily routine to register or collect their PVCs at INEC office.

He said the number of eligible voters said to have registered in Anambra was a far cry from the population of voters in the state.

“It is a serious source of worry for us how our youths behave when it comes to politics.

“They are very active on social media , posting all sort of things about Nigeria and some individuals but in practice, they are not doing anything; common registering to vote, they will not, for those that manage to register, go and get your PVC, no way.

“Worse still, on the day of election you see them playing football and drinking at joints because they feel it is not their business, that is why very small per cent of them voted in the last governorship election in Anambra.

“What we are saying is that INEC, the political class and communities should encourage those who have not registered to do so before the time is up,” he said.

Addressing the participants, Mr Leo Nkedife, Head, Public Relations Department of INEC in Anambra , corroborated the CSOs’ observation that the turnout of people in the state for the CVR was poor.

Nkedife urged the people to take advantage of the exercise to register, saying that registration was free.

He urged the people to report any of the commission’s official(s) who demanded money before registering them.

Nkedife disclosed that only 22 per cent of the 2.15 million voters in Anambra participated in the Nov. 18, 2107 governorship election, and that over 142,000 PVCs were still awaiting collection at the INEC office in the state.

He said INEC had greatly improved in the conduct of elections as people’s votes now count.

Prof Collins Okafor of the Department of Political Science, Nnamdi Azikiwe University, Awka, blamed the political apathy among the people on lack of confidence in the Nigerian electoral process.

Okafor said apathy include; refusal to register, refusal to belong to a political party, refusal to vote and refusal to protest against rigging and other electoral malpractice.

He said those who did not participate in politics contributed more to the political and economic crisis in the country.